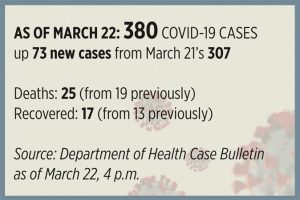 HEALTH and local government officials of Cagayan have given assurance that the district hospitals around the province are ready to handle suspected COVID-19 cases with isolation rooms set up and medical workers briefed. As of March 21, there is one patient at the Cagayan Valley Medical Center confirmed to have the new coronavirus disease. Governor Manuel N. Mamba, in a statement on the province’s Facebook page, stressed the call for people to stay at home as 14,000 persons are under monitoring around the province. These people are mostly those who came home from Metro Manila following the declaration of an enhanced community quarantine in the entire Luzon island on March 16.

NO TESTING KITS
Mr. Mamba also underscored that there are asymptomatic persons who can spread the virus, but “dahil sa walang testing kit sa lalawigan, hindi agad nalalaman kung ang isang indibidwal ay positive carrier nito (because there are no testing kits in the province, we cannot immediately determine if a person is a positive carrier of the virus). Meanwhile, Provincial Health Officer Carlos D. Cortina III said aside from the isolation rooms in the district hospitals, vehicles for transporting patients are also on standby. The province has at least nine district hospitals, including the Northern Cagayan District Hospital, Baggao District Hospital, Alfonso Ponce Enrile Memorial District Hospital, and the Aparri District Hospital.

ALL public transportation, including taxis and tricycles, are now covered by the ban in Iloilo City, which has been placed under “lockdown” by Mayor Jerry P. Treñas on March 19 to prevent the spread of the new coronavirus disease known as COVID-19. “We want to use lockdown to better emphasize the need of the people to stay in their homes and practice the enhanced community quarantine and to limit the movement of people,” he said in a press conference. Public Safety and Transportation Management Office (PSTMO) head Jeck D. Conlu announced on Saturday that taxis and tricycles, which were previously allowed to continue operation, will no longer be allowed to ply the streets starting 8 p.m. Sunday. The PSTMO has earlier accredited several jeepneys that will be allowed to continue providing public transport service. Mr. Conlu also said that the city government will be providing free transport services to ferry the workers exempted from the community quarantine rules. “We will be providing three modern jeepneys and one bus of the city government. We re still in talks with other bus companies for the additional units,” he said. As of March 21, there is one confirmed COVID-19 case in Iloilo province, coming from the town of Guimbal and currently being treated at a hospital in Iloilo City. The patient is the second positive case in the Western Visayas Region, with the first in Bacolod City. — Emme Rose S. Santiagudo

GENERAL Santos City’s evacuation center, located at the Rajah Buayan Air Station, is being prepared as a quarantine area for patients under investigation (PUI) of COVID-19. Mayor Ronnel C. Rivera, in a statement on his Facebook page, said the facility, which can accommodate 120 patients, will be used should there be a rise in the number of PUIs. “While we are fighting na hindi makapasok ang (to prevent the entry of) Corona Virus sa city, we are still preparing for the possibility na just-in-case dadami ang ating (in case there will be an increase in the number of PUIs,” he said. The city, which still has zero confirmed cases of the new coronavirus as of March 21, was placed under enhanced community quarantine last week. Ryan M. Aplicador, deputy incident commander of the city’s Inter-Agency Task Force for COVID-19, said General Santos City’s medical professionals and private hospitals have committed to help operate the quarantine center. “The LGU (local government unit) will provide the supplies and equipment and the Philippine Medical Society General Santos Chapter and the Philippine Hospital Association General Santos Chapter promised to provide personnel,” Mr. Aplicador said.

CENTRAL KITCHEN
Meanwhile, the Department of Education will also open its central kitchen at the Datu Dalid Acad Elementary School to prepare food for the frontliners and other responders. Schools Division Superintendent Romelito G. Flores said he will also activate the volunteer parents to augment the kitchen workforce. Department of Health-Soccsksargen Region data as of March 20 shows there are 784 persons are under monitoring and on home quarantine, of which 177 are in General Santos City. The region has one confirmed COVID-19 patient, confined at the Cotabato Regional and Medical Center. Two persons under investigation have died, but their test results for the disease are still pending.

THE SOUTHERN Philippines Medical Center (SPMC), the biggest state-run hospital in Mindanao located in Davao City, is suspending its Outpatient Department (OPD) operations beginning Monday until further notice. SPMC Chief of Hospital Leopoldo J. Vega, in a text message, said this is “a temporary measure to contain” the spread of COVID-19 by preventing overcrowding. SPMC is considered a high volume hospital with 1,500 beds and an average capacity of 2,200 outpatients a day. It has been identified as a COVID-19 hospital for severe and critical patients. As of March 21, Davao City has two persons confirmed positive of the coronavirus disease 2019, a couple with travel history in Metro Manila. They are currently asymptomatic and are on home quarantine. They will be undergoing re-testing. One SPMC patient who was considered a person under investigation, a 71-year old from Matanao town in Davao del Sur who died March 15, tested negative of COVID-19. SPMC is preparing to serve as satellite laboratory for “diagnosis and identification” of suspected COVID-19 patients in Mindanao. It is the only hospital in Mindanao equipped with a polymerase chain reaction (PCR) machine that allows real-time diagnosis of COVID-19 and other infectious diseases. — Maya M. Padillo and Carmelito Q. Francisco

Our heroes in health crisis