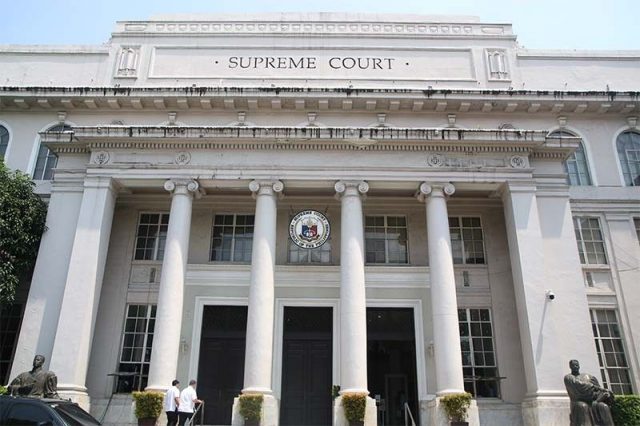 THE PHILIPPINE Supreme Court (SC) has declared unconstitutional two portions of a controversial anti-terrorism law passed last year, invalidating a provision that would have criminalized protests deemed by authorities as harmful.

Voting 12-3 in a case hearing on Dec. 7, the court declared as unlawful a provision in the anti-terrorism law, which states that a protest could be considered terrorism if it is intended to cause death or physical harm, to endanger a person’s life, or to create a serious public safety risk.

That provision is “overbroad and violative of freedom of expression,” the court said in a media advisory on Thursday.

Voting 9-6, the high tribunal also declared unconstitutional a designation method that would have allowed the country’s anti-terrorism council to adopt proscriptions by supranational authorities after a through criteria review.

The High Court said that other challenged provisions of the law — including the warrantless arrest and 24-day detention — are not unconstitutional or are still enforceable.

“The main ponencia and the various opinions contain interpretations of some of the provisions declared in these cases as not unconstitutional,” the court said in the advisory.

Republic Act No. 11479 or the Anti-Terrorism Act of 2020, which repealed a 2007 human security act, is considered as the most contentious law to date.

It was signed into law on July 3, 2020, and took effect on July 18. A total of 37 legal petitions were filed by Filipino lawyers from across the political spectrum. Reiterative motions were also filed after Philippine authorities arrested or tagged as communists some of the law’s petitioners.

Petitioners hailed the court’s decision as an initial victory, but said there are still provisions that could be abused by the government.

The ruling “corrects the erroneous and dangerous view of the law’s proponents that equate activism with terrorism,” said former lawmaker Neri J. Colmenares, one of the petitioners.

He said the decision has “essentially” excluded advocacy, protest, dissent, stoppage of work, industrial or mass action, and other similar exercises of civil and political rights from the scope of the law.

“We welcome the effort by the High Court to protect our civil and political rights from the overreach of such a draconian and dangerous law.”

However, Mr. Colmenares said petitioners plan to challenge the court’s declaration that the other provisions of the law are not unconstitutional.

Edcel C. Lagman, another petitioner and a veteran lawmaker, said upholding the legality of the anti-terrorism council’s authority to detain a terror suspect for a maximum of 24 days without a judicial warrant of arrest is “a blatant violation of the Constitution, which mandates that only the courts can order the detention of a suspect through the issuance of a warrant of arrest.”

“Under the Constitution, during extraordinarily precarious times when the privilege of the writ of habeas corpus is suspended, a person apprehended must be released, if there are no charges filed against him in court, upon the expiration of three day’s detention,” he said.

The definition of terrorism should have been junked for being vague and putting the lives of critics at risk, Mr. Lagman said.

“(T)he entire law should have been voided,” he said.

Lawyer Howard M. Calleja, one of the first petitioners, welcomed the court decision, but said the legal battle is not over.

“We are pleased with our partial victory and will continue to pursue available remedies for the reconsideration of the other questionable provisions,” he said.

There are more than 700 political prisoners in the Philippines, 489 of them were arrested under the Duterte government, data from rights group Kaparatan showed. More than 400 politically-motivated killings happened under the current administration, it said.

On the other hand, Senator Panfilo M. Lacson, one of the principal authors of the law, said the court’s ruling fundamentally upholds the Anti-Terror Act as constitutional.

“The decision of the Supreme Court, in just one short sentence is ‘peace wins over terror’,” Mr. Lacson said.

The country’s Anti-Money Laundering Council has said that the law is crucial to efforts in countering “dirty money” and terrorism financing. — Kyle Aristophere T. Atienza with a report from Alyssa Nicole O. Tan

Poor Filipinos may get vaccinated soon, says Department of Health