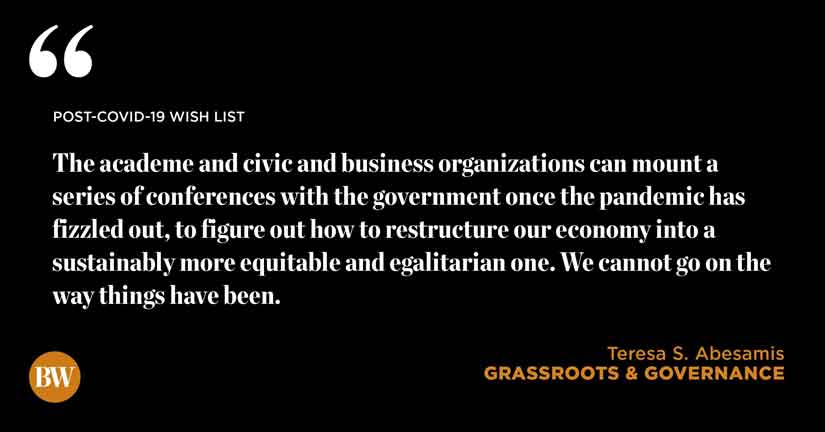 When the pandemic has fizzled out, what will be the new normal?

Certainly if we are to mature and progress as a people, there has to be a reordering of priorities. Following months of isolation, simplicity and silence, we cannot return to the way things were. Hopefully, we will have realized what basically are truly important to us.

Hopefully, instead of idolizing celebrities, whether famous or notorious, we will have discovered our true heroes: Our farmers and fishers, who continued to produce our food. The truckers who deliver these to groceries and markets. Doctors, nurses, midwives and other health workers who risk and actually sacrifice their lives to care for our sick. Store clerks who man our groceries, banks, and pharmacies. Vendors who continue to man their market stalls. Barangay workers and bureaucrats who do the work of distributing cash, rice, sardines and other commodities to the needy including daily wage labanderas who could not go out to earn.

We should have developed deeper empathies for the jeepney, cab, and tricycle drivers and their families who have suffered greatly during the lockdowns when they could not earn a living. Plumbers, carpenters, mechanics and electricians who could not work. Waiters and baristas in the coffee shops where we chat with our friends. And oh, how we miss our hairdressers and barbers.

If our tragic experience has taught us anything, it should have made us realize that most of the people we need the most in our lives also happen to be among the poorest, including those who produce our food.

I am no economist, but it seems that what they call our Gini coefficient, or the gap between our rich and poor is one of the most obscenely huge in the world. We have a few really filthy rich families who land in Forbes’ lists of the richest in the world, and who account for a minuscule percentage of the total number of Filipinos. And we have the vast majority who are living below what might be termed decent lives.

We are basically a Christian nation. And yet, we pretend not to notice that 30-40% of our compatriots are still experiencing involuntary hunger, even before COVID-19. Imagine how much higher that percentage must have grown during the crisis.

Meanwhile, our media content has been heavy on entertainment and lifestyle (of the rich and famous). Going through them can give the impression that we are a first world country. Even the broadcast programs that reach the “masa” (masses) are heavy on light entertainment. Perhaps this accounts for the kind of voters we have today. Over-entertained?

To be fair, many of our big conglomerates have been doing their share in helping the needy during the crisis. They have given away food and health safety tools such as masks, thermometers and protective gear to health workers in hospitals. Some huge conglomerates continued to pay salaries to their employees, including those who cannot report for work, and have given assistance to many of the poor.

We do have a culture of responding to our neighbors’ needs in times of crisis. This has been demonstrated in the aftermath of typhoon Yolanda in Eastern Visayas, in the earthquake in Bohol, in the recent eruption of Taal. But is this crisis-related generosity sustainable?

It seems to me that our politicians and business leaders might want to do some really radical thinking on how we can attain a more egalitarian society. The most prosperous societies tend to be those where the minimum wage workers can live a decently comfortable life. The United States has to contend with the powerful labor unions who had to fight for their rights for years. And yet, businesses in that richest among all nations probably benefited from the increased and broadened purchasing power of their markets as a consequence of the power of the unions.

Our own economy has been kept afloat by the remittances of our heroic OFWs who had to leave home in order to give a better life, including education, to their families. Our highly paid call center agents have boosted economies such as those in Cebu because of the broad increase in purchasing power.

When Lito Osmena was governor of Cebu, he noted that labor strikes here, which led to higher average salaries especially in the industrial parks, were actually good for Cebu because of the enhanced market for local products and services. When the local shipbuilding industry had to contend with the entry of a Korean shipbuilder in Subic, Cebu welders’ salaries were increased, to stem the tide of “piracy” which was good for the economies of the small towns in Western Cebu.

Perhaps we should consider that instead of keeping our wages low as our competitive edge for investments, we should invest in raising our workers’ productivity; and develop higher value-adding industries the way Singapore did.

Hopefully, our experience with the pandemic has enabled our industrialists and other businessmen to realize that there is really little more that they need; and that they can afford to share more of their corporate incomes with their workers.

Perhaps the academe and civic and business organizations can mount a series of conferences with the government once the pandemic has fizzled out, to figure out how to restructure our economy into a sustainably more equitable and egalitarian one. “Left-leaning” parliamentarians should be part of the process. We cannot go on the way things have been.

The armed radical left has it wrong. My old friend Boy Morales, when he was chair of the National Democratic Front, once said to me “When you no longer have the support of the people, that means your politics is wrong.” The NPA has become, to my mind, a bunch of bandits who live on retainers from threatened businesses. The parliamentary struggle which is allowed under our Constitution should be accepted and respected.

We should not accept the administration’s continuing threats against so-called “leftists” as long as they are not violating the laws of the land. The process of raising consciousness about the need for greater justice must be allowed. It can be functional, if we are to undertake the radical reforms that our country needs.