I wrote a recent paper for the Albert del Rosario Institute (Stratbase-ADRi), “Assessment of the Philippines’ Sin Tax laws: Have they delivered the expected revenues?”

The quick answer is “Yes.” The primary purpose of the sin tax hike is to raise more money for the government, secondarily to reduce consumption of so-called “sin products” like tobacco, alcohol, and sugar-sweetened beverages (SSB). And there is a big question mark if the second objective was really attained. 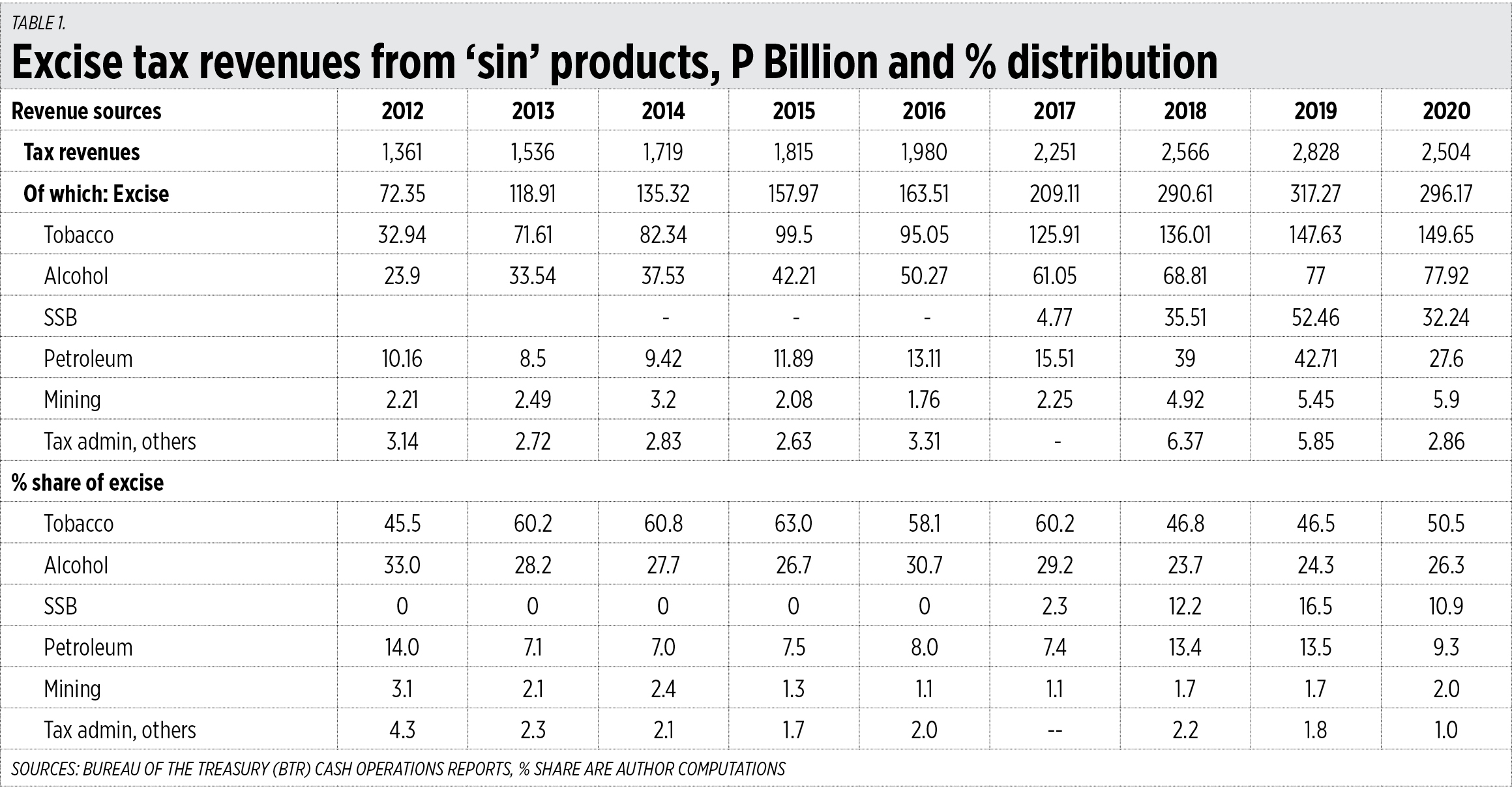 As a percentage of total excise tax revenues including collections from petroleum and mining products, tobacco taxes share increased from 45.5% in 2012 to 60% in 2017 while alcohol share decreased from 33% to 29% over the same period. By 2020, tobacco taxes comprised 50% of total excise tax collections, alcohol and SSB comprised 26% and 11%, respectively. The three products brought in a total of P260 billion to the government, big money for the government.

So, high tax rates lead to low smoking and drinking incidence? Likely the answer is “No.” Because the government and NGOs only look at reduced volume of legal tobacco and alcohol but not illegal tobacco and alcohol. I made my own estimates using four scenarios and assumptions. The estimated increase in smoking prevalence ranges from 1.2% to 6.8% of population. Meaning that from 21.4% of population in 2019, actual smoking prevalence can be 22.6% to 28.2% of population. Higher tax rates lead to higher smuggling, cheaper illegal tobacco, and led to more smoking, not less.

The bill has many prohibitions — minors below 18 years old cannot have access to these products; no online selling; celebrities cannot endorse these products; they are banned in schools, hospitals, and government offices; distribution is banned within 100 meters from any perimeter of a school or playground; no corporate sponsorships to industry associations or trade events, and so on.

Senate President Pro Tempore Ralph G. Recto, the Chairperson of the Senate contingent to the Bicameral Conference Committee on disagreeing provisions of both bills, made good arguments in his sponsorship speech of Senate Committee Report No. 265 on SB No. 2239 last in May 2021. He said, “VNPs are not safe and not risk-free. Similar to cigarettes, they pose health risks. The absence of combustion does not make it nicotine-free. What VNPs do is that they lessen the emission of other harmful chemical compounds, which are released when tobacco is set on fire.

“For many who have been trying, VNPs have been a good alternative to kick the (smoking) habit. VNPs, as borne by many studies, can scale down consumption… While this paradigm is still contested, it is gaining adherents from the science community as a feasible approach in tobacco control. I will not argue that these products are safe or as pristine as clean mountain air, because there is no debate there.”

VAPE TAXATION
Before the vape bill regulating the products, there was a vape tax under RA 11467 (2020). In 2019 during the discussions on potential tax revenues from e-cigarettes and VNPs, the Departments of Health and Finance (DoH and DoF) made bloated and exaggerated projections that incremental revenues would be P3.2 to P4.3 billion a year. Compare this with lower estimates from House Bill (HB) 1026 and the Department of Budget and Management’s Budget of Expenditures and Sources of Financing (BESF). The computed difference from DoH-DoF projection vs. BESF 2022 ranged from P3 to P4 billion a year and the exaggeration is 12x to 19x a year (Table 2). 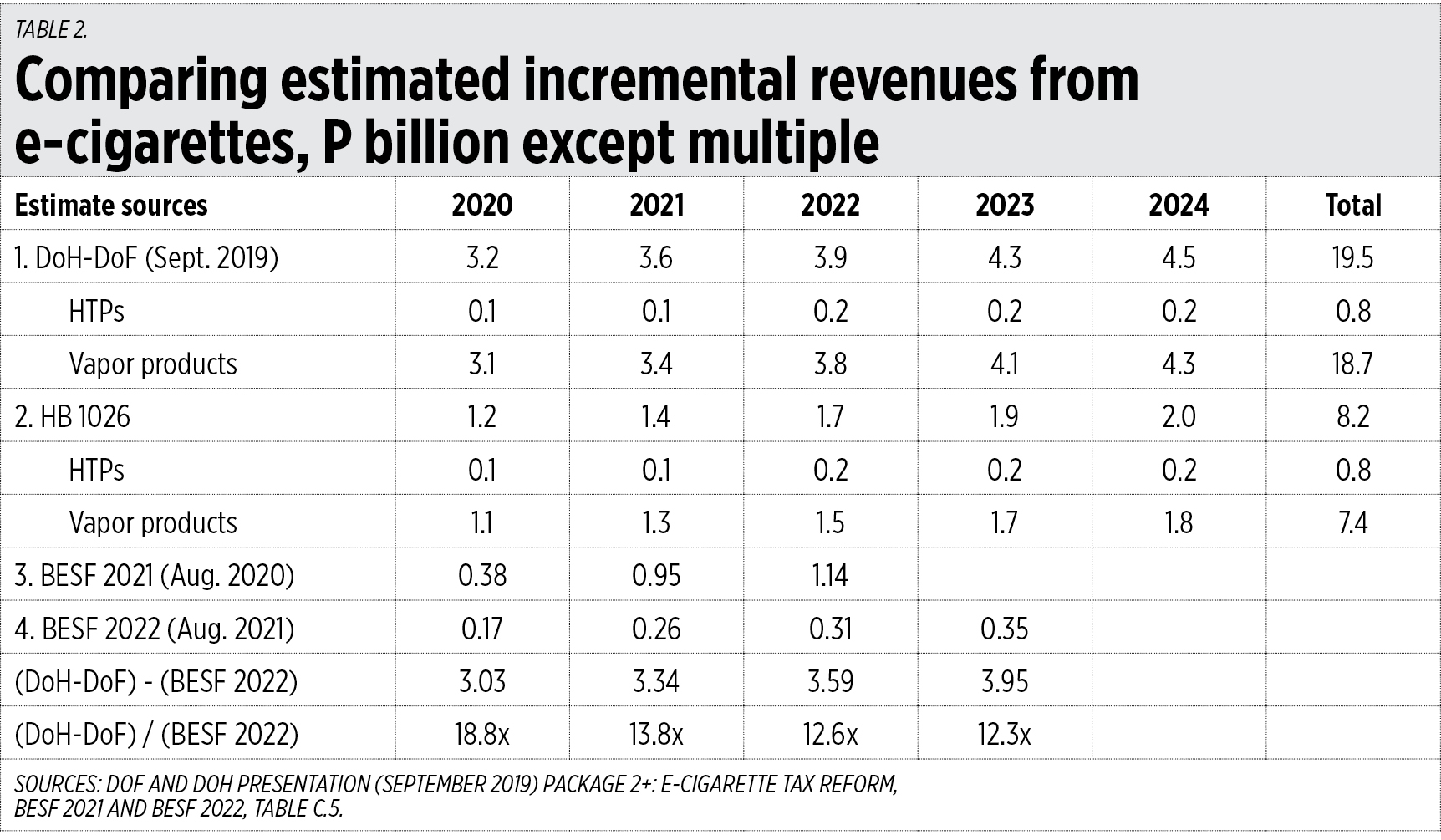 The DoH-DoF can argue that because of the COVID-19 pandemic and lockdowns, their bloated estimates did not materialize. That is not a plausible explanation because consumption of tobacco products has hardly been affected by the pandemic. For instance, tobacco tax revenues rose from P147.6 billion in 2019 to P149.6 billion in 2020 and P172.3 billion in 2021.

The DoH-DoF just deliberately bloated their estimates with unrealistic assumptions to rush the law, and people quickly shifted to HTPs and salt nicotine, and/or shifted to smuggled products.

Yet these harm-reduction products are not demonized. Probably because anti-vape people are consuming these and there is no funding to attack these products. So, there is double-talk when people attack harm reduction substitutes for tobacco products but not harm reduction in alcohol, soda, chocolate, ice cream and other products.

Instead of double talk, the vape bill should pass. It is an anomaly actually that there is a need for legislation for this. A slippery slope, this may lead to legislation to further regulate use and distribution of those products aside from raising their taxes.

Government concern for public health is also inconsistent. It is less concerned with risky sports like rock climbing and downhill cycling that can cause considerable bodily injury in case of accidents. Or financially addicting activities like online and casino gambling, cockfighting, and many other activities.

Either government should regulate and tax all of these products and activities heavily — which will further increase government corruption — or it should relax regulations and taxation to have consistency in public policy.

Civil society as a co-producer in fighting corruption