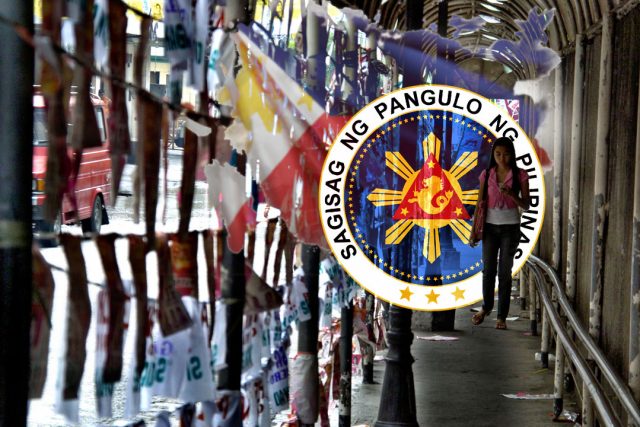 I liken a presidential campaign to a total marketing effort, the electorate to the market, the candidate to a brand, public opinion polls to market surveys, platform speaking to product display, hugging voters and shaking their hands to personal selling, and assistance in cash or kind to barangay projects to sales promotions. Advertising a candidate is exactly the same as advertising a brand.

Some candidates, like many senior executives from other management disciplines, think that advertising is all there is to marketing, or that advertising and marketing are synonymous. That is why the air lanes are now saturated with advertisements of candidates for public office when the official campaign period for next year’s elections has not yet started. The advertisements were crafted to sound and look like information spiels or “infomercials” to avoid running into conflict with election laws.

In product advertising, the No. 1 principle of effective advertising is that the advertisement must be consumer oriented, meaning it should say what benefit the consumer would derive from the product. A commercial that says Brand X is the No. 1 in the market would not be as good as one that says Brand X provides the benefit you seek, like “it makes your breath smell fresh.” Principle No. 2 says the benefit promised should be the most important among the several benefits that can be derived from the product, as in “It’s so juicy, you need no sauce.”

Similarly, advertisements of political candidates should be voter oriented. The advertisement should address the need of the voter, his interest, and his values. It must tell the voter that he or she is the best person among the candidates that can meet the need of the voter. The difference between product advertising and presidential candidate advertising is that the former addresses only a segment of the entire market, like only the young or the budget-conscious, whereas the latter must convince the entire voting population, young and old, rich and poor, educated or school dropout, to get elected.

The advertiser of a product determines through market surveys what benefits the target consumers are looking for in a product and which benefit among many is the most important to them. Some political candidates are oblivious to the importance or necessity of a methodical study of the electorate first before they launch their campaign. They do not believe in surveys. They cannot comprehend how the opinions of 1,200 people could reflect the sentiments of millions of voters scattered all over the archipelago.

Many presidential candidates have been guilty of this serious blunder. During the presidential race of 2016, candidate Miriam Defensor Santiago asked, “Why is it that when universities are asked, from left to right, it is Miriam? But if commercial surveys are conducted, I’m not even there.”

She was “disheartened” by the national surveys. She had fared very well in campus surveys and mock polls. That was because her public appearances were mostly in universities. She did not speak to other sectors of Philippine society — the farmers in Central Luzon, the factory workers in the Calabarzon area, the fishermen in Southern Mindanao, and many more. The people the major pollsters, Social Weather Stations and Pulse Asia, interviewed represented all the sub-groups of the voting population. Collectively they reflect the sentiments of the entire electorate.

In the 2010 presidential derby, candidate Gilbert Teodoro, who did not believe in public opinion polling or surveys, used “Talino at Tiyaga” (Talent and Perseverance) as his campaign watchword. Had his campaign staff studied the electorate, they would have learned that it was riling at the immoderate greed, unconscionable extravagance, and brazen abuse of power of the Gloria Arroyo presidency. Teodoro was Arroyo’s own choice to succeed her. Benigno Aquino III, who ran with the slogan “Kung walang corrupt, walang mahirap” (If there is no corruption, there is no poverty) was elected president. Teodoro placed fourth in the race.

Candidate Richard Gordon, another detractor of surveys, adopted the campaign theme “Pagbabago” (Change). If he had a survey done on how the voters saw him, he probably would have found out that in the eyes of the voters he was a “trapo” the pejorative sense of traditional politician. In the view of the voters, the “trapo” Gordon could not possibly bring about change. He garnered only a half million votes or 1.4% of the total cast for presidential candidates.

Only Mayor Isko Moreno and former Senator Bong Bong Marcos among the presidential candidates have so far produced and aired advertisements. Panfilo Lacson’s launch of his candidacy was obviously filmed in a recording studio under the direction of a professional group. It seems it was meant to be a TV commercial. There are only copies of the live coverage of the launch of the candidacies for president of Vice-President Leni Robredo and Senator Manny Pacquiao.

Isko Moreno’s infomercial says he will be a healing president who will work with anybody to achieve national reconciliation and reconstruction based on justice and the rule of law. Bong Bong Marcos promises in his advertisement new life, to provide jobs, find new sources of energy, and develop agriculture. Ping Lacson’s video has the message “Enough is enough, right the wrong, this is the beginning.”

It seems to me that those promises were not based on formal research, for if they were, there would be some uniformity in the promises of the candidates. Scientific surveys, though conducted by different professional research groups, would have come up with the same findings: what the voters’ need, interest, and values are. The candidates’ promises would have been their responses to those issues. The responses therefore should have been similar.

The advertisements should vary only on the qualifications of the candidates for the presidency. The advertisements of Moreno, Marcos, and Lacson do differ in that regard. Isko projects the image of one who raised himself by his own effort from the depth of poverty to mayor of the premier city of the country. He can raise the great majority of the Filipino people from poverty to comfortable life. Bong Bong, as the son of the president who was supposed to have been responsible for the golden age of the Philippines, can bring about good times again. Ping, once the chief of the national police, can bring peace and order in the country.

The next reports of pollsters Social Weather Stations and Pulse Asia will tell us if those images and promises work.