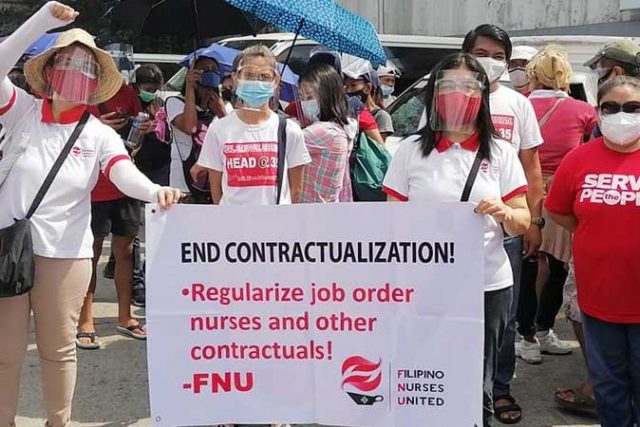 A GROUP of nurses slammed the administration of President Rodrigo R. Duterte for its failure to address the shortage of nurses and other healthcare workers.

In a statement, the Filipino Nurses United (FNU) said the total 9,088 health workers hired through the Department of Health’s (DoH) emergency hiring program is “way below” Mr. Duterte’s vow in his 2020 State of the Nation Address to hire more than 20,000 this year.

Instead of mass hiring nurses, the group noted that the Health department “resorted to emergency hiring of contract of service for three months’ employment that included 3, 909 nurses.”

“This is even way below the FNU’s recommendation of 48,000 nurses more so considering that there are 1,700 COVID 19 referral centers all over the country,” it said.

Citing data from DoH, the group said the number of deployed nurses were reduced by 12% or 2,319 nurse slots. The 13,000 vacant plantilla positions of health workers since 2016 remain unfilled, it said.

“The preventive and promotive aspects of health care have become even much less at a time when people are in critical need of basic, essential health services to prevent increase of COVID-19 infection,” the group said.

The group also lamented that many health workers still have not received their special risk allowances under the country’s second stimulus law, known as Bayanihan II, which expired last June 30. In a virtual press briefing on Monday, Health Undersecretary Maria Rosario S. Vergeire said the DoH would look into bottlenecks preventing the release of the special allowances. — Kyle Aristophere T. Atienza

With Omicron, global economy spots chance to push past COVID