THE central bank is widely expected to maintain key policy rates at record low levels on Thursday, as it waits for fiscal policy to do its part in quelling the recent spike in inflation.

In a BusinessWorld poll held last week, 17 out of 18 analysts said they expect the Monetary Board (MB) to leave interest rates unchanged at its first policy-setting review this year on Feb. 11.

Analysts said any change in benchmark rates will come later this year or in 2022, as the Bangko Sentral ng Pilipinas (BSP) reserves its ammunition in supporting the economy during the crisis. 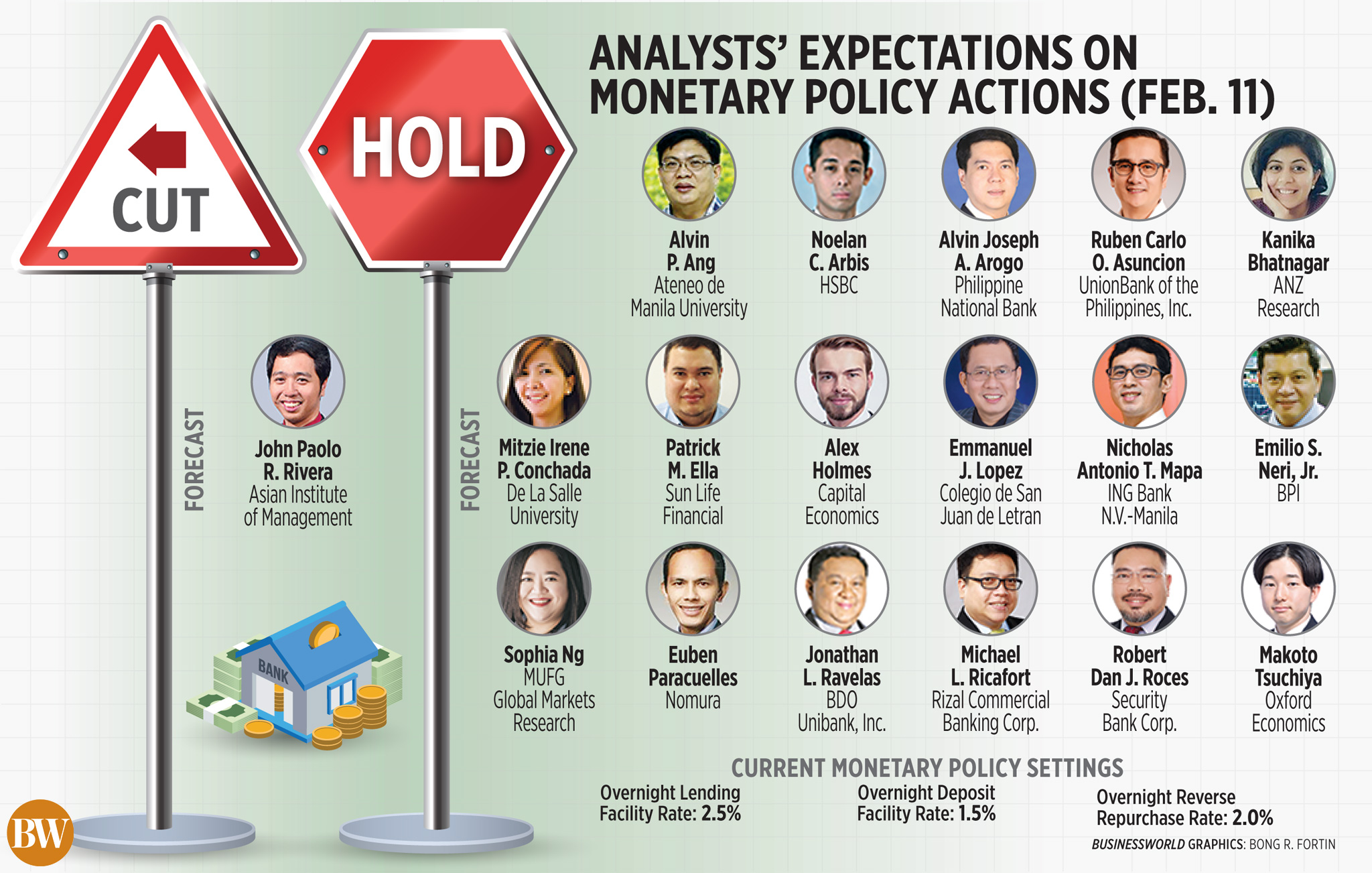 “We think they will maintain all settings (in the) next meeting as inflation is on the rise and this year’s target is at risk of being breached. A rate cut would be excessively aggressive and subject markets to unhealthy degree of volatility,” Bank of the Philippine Islands Lead Economist Emilio S. Neri, Jr. said.

Consumer prices surged for a fourth straight month to a two-year record in January. Headline inflation soared to 4.2%, surpassing the 2-4% annual target set by the central bank. The BSP expects headline inflation to average 3.2% this year.

Rates for the overnight reverse repurchase, lending, and deposit facilities are currently at record lows of 2%, 2.5%, and 1.5%, respectively, after the BSP slashed rates by a total of 200 basis points (bps) in 2020.

BSP Governor Benjamin E. Diokno on Friday said the projected uptrend in inflation is temporary. “The sources of near-term inflation pressures are supply-side shocks in nature that should not require a monetary policy response unless they lead to further second-round effects,” he added.

Mr. Neri said another rate cut at this point may mean more damage given some home prices have started to pick up.

“Rising property prices (townhouses, etc.) is an indication that deflation is not a big risk, [and] that more rate cuts can translate to higher rental rates,” he said.

Prices of townhomes and single detached/attached houses rose by 12% and 7.4% year on year, respectively, in the third quarter last year, based on BSP data.

Meanwhile, the implementation of a 60-day price ceiling on selected meat and chicken products in Metro Manila will address “first-round effects” of inflation that affect commodity prices.

“It looks like BSP is willing to accommodate the so-called ‘first round effects’ and only look to act should signs of ‘second round effects’ such as wage or transport fare adjustments become apparent,” ING Bank N.V. Manila Senior Economist Nicholas Antonio T. Mapa said.

Asian Institute of Management economist John Paolo R. Rivera, on the other hand, is pricing in another rate cut on Thursday.

“Given the economic contraction we had in 2020 and rising inflation (cost push inflation), BSP might slightly cut off rates further by a few percentage points. This is to induce spending among consumers that will boost domestic consumption and investment expenditures,” Mr. Rivera said.

The country’s gross domestic product (GDP) contracted by a record 9.5% last year, as it struggled to contain the fallout from the coronavirus disease 2019 pandemic.

Some analysts said the BSP will go for a pause on Thursday, but will likely resume easing later this year.

“If by end of the first quarter the real economic indicators do not show improvement and government spending remains lackluster, the central bank will likely go for another 25 bps rate cut in March,” ANZ Research economist Kanika Bhatnagar said. The MB’s next policy-setting meeting is on March 25.

Alex Holmes, an economist at Capital Economics, said the BSP may consider the continued need to support the economy with recovery likely to underwhelm in the next quarters.

“[W]hile the current trend in inflation is likely to delay the central bank from easing further, it is unlikely to stop it. We are sticking with our forecast for 50 bps of cuts this year,” Mr. Holmes said.

HSBC Global Research economist Noelan Arbis expects the central bank to pause easing this year but raise policy rates by a total of 75 bps in 2022, “assuming the virus is contained at that time.”

Meanwhile, analysts said there is still room for cutting the reserve requirement ratio (RRR) of banks, although this could come later in the months ahead.

“Ample liquidity remains so there is no need to cut reserve requirements at this time. [RRR cut will] most likely occur towards the second half of the year,” BDO Unibank, Inc. Chief Market Strategist Jonathan L. Ravelas said.

The BSP slashed RRR of big banks by 200 bps last year, while reserve requirements of thrift and rural lenders were cut by 100 bps to 3% and 2%, respectively. Mr. Diokno said policy measures last year have infused about P2 trillion in liquidity. However, data show banks are not utilizing this to expand credit.

“We believe that reviving loan growth at this point is more dependent on government initiatives that improve the cash flow of businesses such as CREATE (Corporate Recovery and Tax Incentives for Enterprises) and FIST (Financial Institutions and Strategic Transfer) [bills],” said Alvin Joseph A. Arogo, vice-president and head of equity research division at Philippine National Bank.

CREATE will bring down corporate income tax immediately to 25% from 30%, while FIST will allow financial institutions to transfer their nonperforming assets to asset management companies. Both measures are now up for President Rodrigo R. Duterte’s signature.

Prior to the pandemic, Mr. Diokno vowed to bring down the RRR to a single digit by the end of his term in mid-2023.

Max’s is the big winner at the YouTube Ads Awards