IHS Markit on Monday reported its Philippines Manufacturing Purchasing Managers’ Index (PMI) hit 52.5 in January, well above the 50-neutral mark that separates expansion from contraction and a turnaround from the 49.2 reading in December. 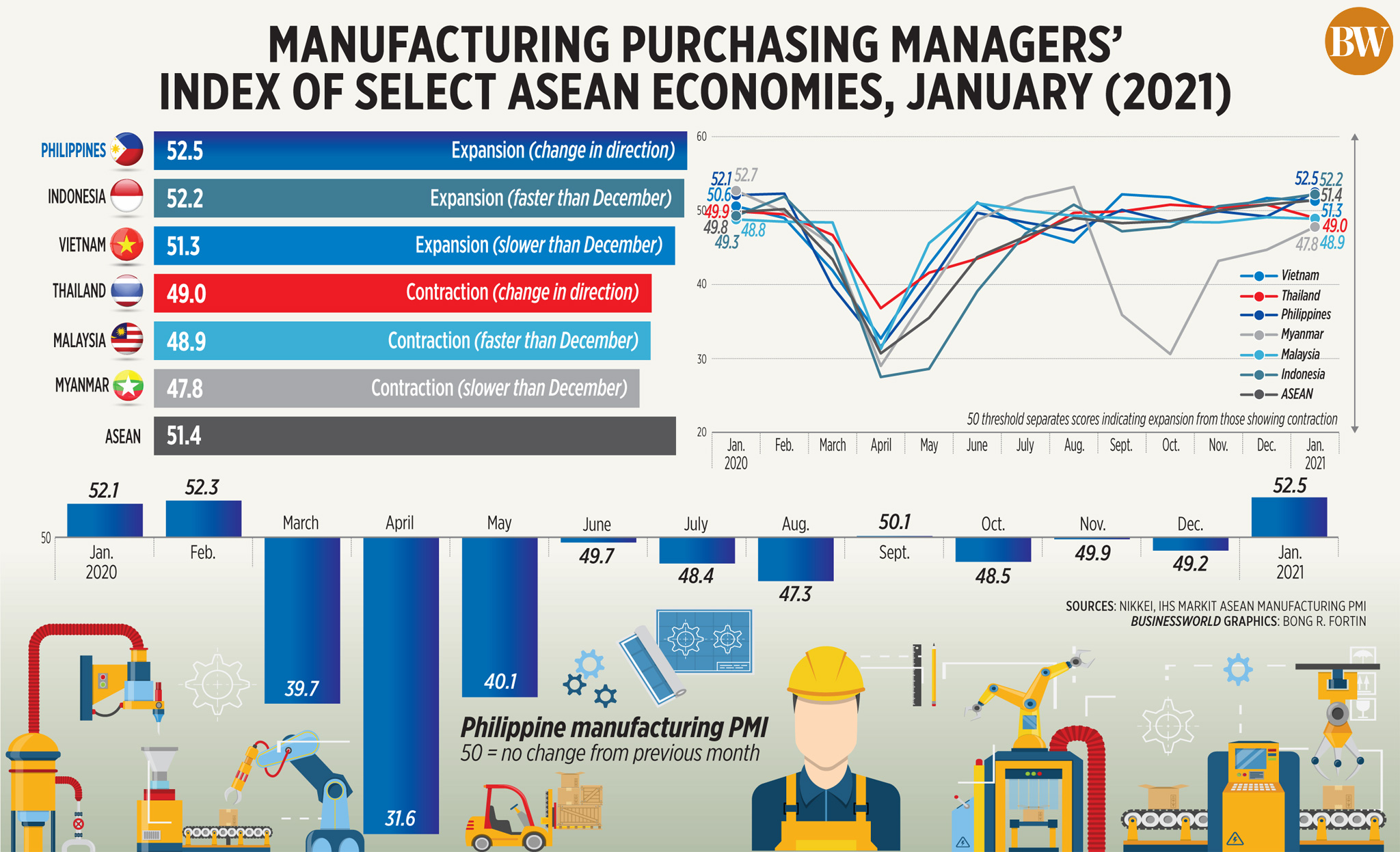 The Philippines topped the list of six Association of Southeast Asian Nations (ASEAN) economies tracked by IHS Markit, followed by Indonesia (52.2) and Vietnam (51.3). On the other hand, manufacturing conditions contracted in Thailand (49), Malaysia (48.9) and Myanmar (47.8).

The Philippines also performed better than the ASEAN average, which improved to 51.4 in January from 50.8 in December.

IHS Markit attributed the turnaround in the Philippines’ Manufacturing PMI to an uptick in domestic customer demand which drove output and new orders higher.

“Output volumes increased modestly at the start of the year despite ongoing virus-related restrictions. According to panel members, an improving demand environment supported the rise in production,” it said.

Metro Manila and its surrounding areas remain under general community quarantine — the second least restrictive form of lockdown, although restrictions have gradually eased.

New orders rose by its fastest pace since July 2019, mainly due to a rebound in domestic demand. However, this was tempered by a decline in overseas orders as strict pandemic-related restrictions were implemented in key export destinations.

Manufacturers ramped up their purchasing activity in the first month of 2021, as production increased.

“An increase in purchasing activity and stocked inventories was also a positive sign that manufacturing companies expect demand to grow over the coming months,” Ms. Patel said.

However, the strong rebound in production was not enough to stop further job cuts. IHS Markit said restructuring efforts and voluntary resignations in factories continued last month, although the rate of decline in employment was at its slowest in the 11 months.

Supply chain disruptions persisted in January, with “supplier delivery times lengthening to the greatest extent in four months,” while the poor vendor performance has been attributed to port congestion and ongoing pandemic restrictions.

Businesses reported higher input prices due to more expensive raw materials and the impact of bad weather on faster inflation. IHS Markit said the increase in cost burden in January was the highest since November 2018.

The sharp rise in input prices forced Filipino manufacturers to partially offset this through higher factory-gate charges, with the rate of increase surging to its highest in nine months, IHS Markit said.

Filipino manufacturers, however, remained optimistic that production will grow this year, if demand will continue to rise and quarantine restrictions will be further eased.

“That said, the degree of positive sentiment eased from that in December as the continuation of the pandemic weighed slightly on confidence,” it said.

Ms. Patel said businesses are also counting on the smooth rollout of the mass vaccination program of the government against the coronavirus disease 2019 (COVID-19) to bring back confidence.

“Given the still uncertain and uneven recovery, we expect months wherein PMI manufacturing may revert back into contraction until demand is sufficiently reinstated… PMI may also return to contraction in the months ahead with some moderation noted in China’s PMI numbers, which slipped due to mobility restrictions carried out in select areas in China to limit the spread of the virus,” Mr. Mapa said.

He added that looser restrictions will support the improvement in PMI.

“However, risk factors include the new coronavirus strains that are more contagious that could slow down economic recovery prospects amid risk of lockdowns and travel restrictions worldwide, thereby could also result in slower recovery in manufacturing and imports as well,” Mr. Ricafort said.

“We take note of the challenges raised by manufacturing firms, particularly those relating to supply chain disruptions and increasing input prices. We will address these in the Recovery Cluster of the National Task Force, especially in the Task Group on Economic Recovery to ensure that we can sustain the expansion of the manufacturing sector in the coming months,” Mr. Lopez said in a statement.

BIR goes after cockfighting group for P1.30-B in unpaid taxes