THE Philippine digital economy may fail to realize its full potential, as digital infrastructure remains weak and internet speeds are among the slowest and most expensive in the world, a report by the World Bank and National Economic and Development Authority (NEDA) showed.

During the launch of the “Philippines Digital Economy Report 2020” on Monday, World Bank Economist and Task Team Leader Kevin C. Chua said ramping up digital adoption in the Philippines would help it become more efficient and competitive, its local businesses to be more resilient and economic growth to be more inclusive.

“In the Philippines, COVID-19 (coronavirus disease 2019) has accelerated the adoption and use of digital technologies. However, digitalization is largely constrained by the country’s low high-speed broadband penetration, which lags behind neighboring middle-income countries,” the World Bank and NEDA said in the report. 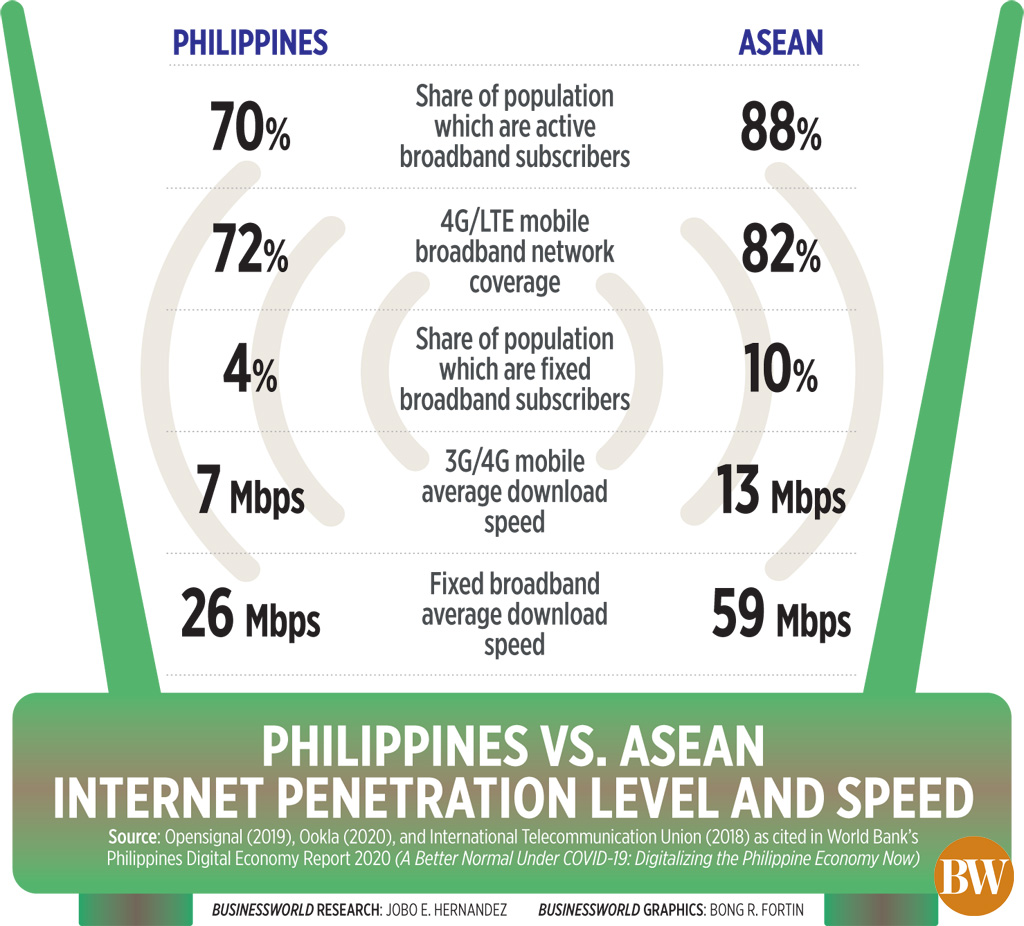 The report noted the Philippines has a big digital divide, with around 60% of households having no access to the internet.

“Digital infrastructure is limited in remote and rural areas, and where they are available, the internet services are relatively expensive and of poor quality. This has led to a digital divide between those with and without access to reliable internet, which contributes to unequal access to services that are delivered via the internet. The unequal access to the internet poses a challenge to the effective and intended delivery of digitalization,” the report read.

Mr. Chua said the internet is more expensive in the Philippines compared with some of its ASEAN peers, with the entry-level fixed broadband costing 6.5% of gross national income (GNI) per capita in the country against the 2% recommended threshold by the United Nations Broadband Commission.

Download speeds also remain to be among the slowest in the region. Mr. Chua noted the country’s mobile broadband speed at 16.76 megabits per second (Mbps) is significantly lower than the 32.01 Mbps global average. Fixed broadband average speed is at 26 Mbps compared with the regional average of 59 Mbps.

“Moreover, at $6.30 per month for 500 MB of prepaid, handset-based mobile broadband, the Philippines has the fourth-highest cost next to Singapore, Brunei, and Malaysia. Surprisingly, despite middling in terms of fixed broadband speed, the cost of a fixed broadband plan in the Philippines is close to the cost of similar plans in Singapore and Thailand, countries which have the fastest speeds in the region,” the report read.

Despite high internet usage among Filipinos, the report said the country’s digital adoption lags behind most Association of Southeast Asian Nations (ASEAN) neighbors.

“[Based on the] World Bank’s digital adoption index in business, people, and government, the Philippines falls behind the world average on digital adoption and it performs poorly compared to some of our regional neighbors like Thailand, Malaysia and Singapore,” Mr. Chua said.

The report said the country is “potentially a significant player in the global digital market” with its 105 million consumers.

Based on the estimates by the World Bank and the Philippine Statistics Authority, the value added of the country’s digital economy posted solid, double-digit increases in the past decade averaging at 13.3%. The sector’s growth rose to 11.9% in 2018 from 11.2% in 2012, based on constant prices.

Electronic commerce (e-commerce) expanded the most during the period by an average of 22.5%, followed by infrastructure at 11.5% and digital media at 9.1%.

Filipino internet users more than tripled to 73 million this year, from 23 million in 2010. They also spent an average of 10 hours a day on the internet, and almost four hours on social media, which are reportedly the highest worldwide.

MOMENTUM SEEN
A wider adoption of digital technology can also help accelerate the economy’s recovery from the  pandemic.

“Despite below-global average digital technology adoption, there is a digitalization momentum the Philippines can leverage on. The Philippines is characterized with high momentum, and significant headroom for growth despite a low current state of digital transformation,” it said.

The country can catch up if infrastructure, policies and regulations will be in place to support digital adoption.

Among the proposed reforms include lowering the cost of logistics that limits the e-commerce industry’s expansion; relaxing legal and regulatory constraints to allow more foreign investments; simplifying the current complex regulations; and updating outdated laws.

“In a society-wide digital transformation led by the government, the government itself must lead by example. The government can serve as an example by taking the lead= in fast-tracking their e-governance projects,” it added. — Beatrice M. Laforga

Cybersecurity attacks surge in the first half