Home Editors' Picks Get your act together!

Surely the changes of functionaries and point persons for the national crisis cannot be comic relief in this terrifying time of the coronavirus pandemic.

In the first week of March, former Presidential Spokesman Harry Roque made a Tweet announcing his first TikTok video on the internet, dancing to the hit song “The Weekend” by SZA as floating hearts appear everywhere, GMA News online reported on March 4. To many, the 10-second video may have seemed absurd and unbecoming for a former presidential spokesman, who was/is supposed to have the elegance of words and demeanor mirroring that of the president. The same news report said, “Just this January, President Rodrigo Duterte said that Roque would be handling the government’s cases against water concessionaires Maynilad and Manila Water.”

Ah, so Roque is back in the good graces of President Duterte. It will be recalled that Roque resigned as spokesman to run for senator in the 2019 elections, but was not endorsed by President Duterte. He was replaced by Chief Presidential Legal Counsel Salvador Panelo. But in the hurly burly of the COVID-19 pandemic that started to brew in January and the declaration of a national calamity with the ensuing community quarantine in mid-March, it was noticeable that the availability and exposure of Panelo in media was waning, and, for a while, it was Senator Bong Go announcing the pandemic developments and government action for the president. And then Panelo was not seen or heard from anymore.

On April 13, Easter Monday, Panelo resigned as Presidential Spokesman, at the same time announcing the re-appointment of Roque as his replacement. Panelo is still the Chief Presidential Legal Counsel.

That same week, 14 Senators signed Senate Resolution No. 362 against Health Secretary Francisco Duque III, citing his “lack of foresight and inefficiency” as grounds for his removal from office, ABS-CBN News reported on April 16. “Knowing fully well the danger posed by the COVID-19 pandemic in the beginning of the year, Secretary Duque failed to put in place the necessary precautionary measures to lessen, if not at all prevent, the impact of this health crisis,” said the resolution, a copy of which was obtained by ABS-CBN News. “Rather than providing enlightening viewpoints on the problems and challenges confronting the country in light of the COVID-19 pandemic, the present Secretary’s actions… show lack of competence, efficiency, and foresight bordering on negligence in handling the health crisis,” it said.

The Department of Health (DoH) did not only fail to immediately suspend travel to and from China, where the virus first emerged, but Duque even “warned [Congress] of the repercussions of banning flights,” the senators emphasized.

President Duterte, that same day, said Duque will stay on as Secretary of Health.

Before the octave of Easter was even over, Socioeconomic Planning Secretary and NEDA (National Economic and Development Authority) Chief Ernesto Pernia resigned on Friday, April 17, as reported in the Philippine Daily Inquirer of April 18. “After reflection during Holy Week, and consultations with my family and close colleagues, I have decided to resign from my post as secretary of socioeconomic planning. This is due partly to personal reasons and partly to differences in development philosophy with a few of my fellow Cabinet members,” Pernia said in a statement where he thanked the President for appointing him to the position.

In an earlier interview with DZMM radio, Pernia said he supported a “calibrated” lifting of the enhanced community quarantine after April 30. “The problem was Pernia made his case too strongly, placing him in an awkward position which prompted his exit,” one House leader reportedly said to the Inquirer. “President Duterte was more keen on stronger enforcement of the lockdown in hopes of seeing a substantial drop in COVID-19 cases,” the lawmaker said, as quoted by the Inquirer. 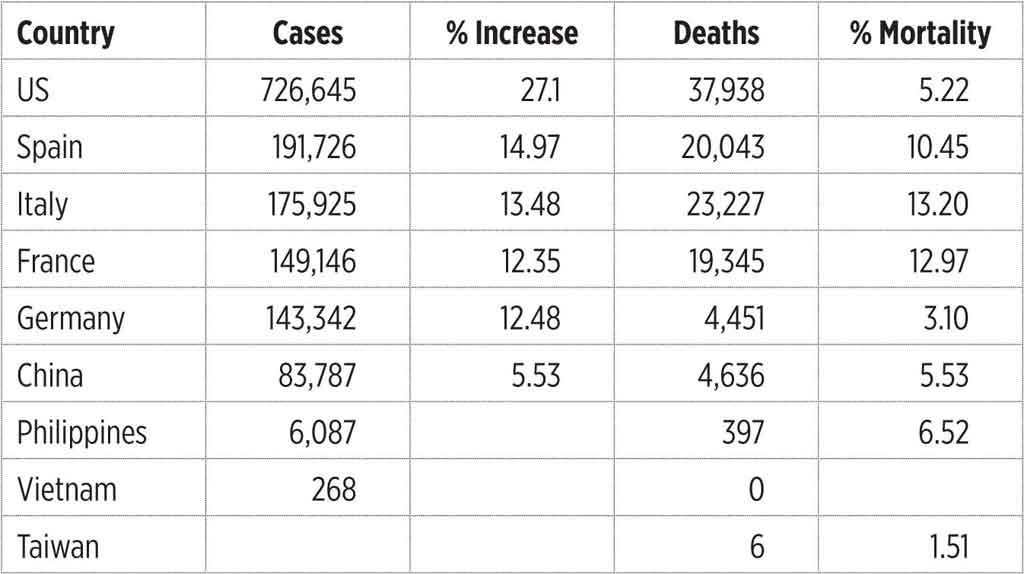 “At the time of his resignation, Pernia chaired the technical working group in the Inter-Agency Task Force on the Management of Emerging Infectious Diseases, which was drafting an anticipatory and forward planning blueprint for a post-COVID-19 scenario,” Albay Representative Edcel Lagman said with regret.

So, where is our country and its waiting, panicking citizens at — now — on the planning for the post-COVID-19 scenario? Can there be enough remaining trust and confidence in retained DoH Secretary Duque, despite the very telling petition for his replacement by the 14 senators? Can the people expect timeliness and integrity of information on the present health crisis and the post-crisis recovery plans from the new/old presidential spokesman? TikTok videos and Viber joke time will only feed the repressed anxieties of the people.

A Viber post — forwarded from a personal friend and family doctor — reportedly from Dr. Dennis Garcia, infectious disease expert of Makati Medical Center, said: “When May 1 comes and we go out of our homes, we will not be immune to COVID-19 any more than we were before March 16, except for the few of us who were infected in the preceding six weeks.” Dr. Garcia says “a quickly developed and approved vaccine is the only real solution for an illness with no clear effective treatment.”

Whether the Viber post is fake or not is not important — it’s prediction is. It says that if there is no efficient planning for now, “16.4 million Filipinos (of the 82 million estimated to be infected in varying degrees) will need in-patient hospital care between May 1 to Oct. 17.” If it sows panic, so be it, because many of the people — especially the poor who are worried for their daily survival, and not discounting the rich and middle class who are worried about getting on with making money again — are now restless and perhaps growing complacent about the virulence of COVID-19.

As of yesterday, Sunday, the Johns Hopkins COVID-19 map reported that worldwide there are 2,310,572 cases, 76.87% growth from last week, and 158,691 deaths or a mortality rate of 6.86%. The top five countries, plus China, the Philippines, Vietnam, and Taiwan, are shown in the accompanying table.

The Philippines is not doing as badly (assuming the statistics are accurate) compared to other countries. Perhaps it is the resilience and native good health of Filipinos, and the relative discipline and overall good behavior during the quarantine. Perhaps it is the fear of death, and of losing loved ones that keeps the Filipino spirit high and hopeful.

May the government leaders please get their act together, and prove themselves worthy of the faith and trust of the Filipino people that we will combat and kill COVID-19 first, and soon. And then the economic planning for after coronavirus can follow. As all economists and our health officials and practitioners say — everything depends on the primary assumption of the virus being controlled before scenarios and expected results can even be thought of.

Peso may weaken ahead of key reports