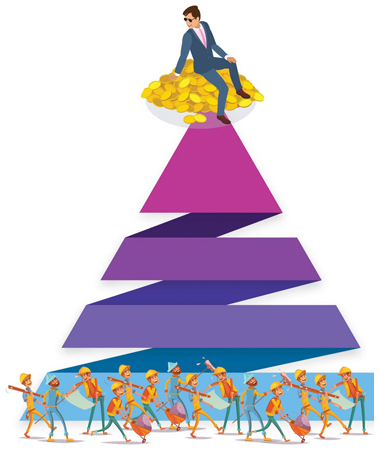 We live, it seems, in particularly trying times of multiple and simultaneous “acts of God.” No sooner had the Angat Dam water level gone dangerously low causing water interruptions than the African Swine Fever decimated our hogs, the Taal volcano erupted, and the coronavirus pandemic exploded disrupting lives, livelihoods, and property. Acts of God happen but we can’t say exactly when and where. And when they come calling, they wantonly lay waste to everything along the way. As a society, we are forced to take draconian measures (lockdowns, evacuations, livestock culling) and to hope we can wait out their ravages. In those times, we draw upon the reserves we built in calmer times. These reserves serve as the ramparts that stand between us and extinction. Our “resilience” is, in other words, anchored on those fateful reserves.

Which is why it is so imperative that we carefully husband the times of relative normality to build up our reserves. Aesop’s resilient ants survive winter because knew in their heart of hearts that the summer sun was for making hay not for fannying about. The ant society is governed by pheromones which leave no place for envy and self-seeking that could divide and weaken the solidarity of the ants. Every ant, in its given own role, struggles mightily to increase the stored reserves of the colony. Which is why the ants are still with us while the dinosaurs have long gone. They will probably be here long after we humans, the dinosaurs of the 21st century, have gone as well.

But not if suddenly ants acquire a class consciousness. What would happen if suddenly the worker class of ants decide that its members too should now exercise their innate but hormonally suppressed capacity to bear offspring of their own and decide to feed on, rather feed, the queen? If suddenly the forager class decides that the soldier class are having too much fun at their expense and sabotage the food train? The colony will soon die out. Not by a physical act of God but by an internal virus of class hatred.

Humans are blessed and cursed with an evolved consciousness. With this come resentment and envy — all the vices and virtues that adorn a human being. Like it or not, we are prone to class envy and even class hatred.

And human societies survive by reining in and harnessing these tendencies towards the production of social reserves. Our dams, our factories, our transport systems, they all embody our reserves. It is the brotherhood of men that rechannel these individual proclivities to productive endeavors. Unhinged, these tendencies result in social chaos and social collapse.

Apropos this rechanneling of proclivities, I am inspired by two quotations which embody my own limited understanding of how economic progress gets engendered or aborted:

Class hatred is antithesis to the efficient path. Most class hating popular leaders produce economic disasters by an excess enthusiasm for the first to the exclusion of the second. Deng Xiaoping’s miraculous China attests to the wisdom of these two ethics pursued as one. Mao Zedong’s China and Nicolas Maduro’s Venezuela attest to the utter folly of the pursuit of equity without the tempering wisdom of efficiency.

It may surprise you as it did me that my first encounter with the brilliant juxtaposition of the above two quotations was not in some ponderous treatise on economic progress but in President Rodrigo Duterte’s 2016 Presidential Inaugural Address. He implied, even as he confessed ignorance of the other cannons of Economics, that these two quotations encapsulated his own innermost economic philosophy. Though more in hope than in conviction, we were reassured. Economic wisdom couldn’t be more succinctly put. In the first two years of Duterte’s presidency, he kept his promise to leave economic policy to his economic team and the economy obliged.

The third year of Duterte saw a switch in the mindset: the second ethic lost ground to the first. After the opposition Otso-Diretso was squelched in the May 2019 elections, Philippine society has been subjected to a firestorm blowing from along the Pasig River. The “hated oligarchs” has resurfaced straight from Joma Sison’s playbook. Suddenly contracts that have served the public well for decades became “onerous” and were threatened with nullification. Has Lincoln’s dreaded class hatred made a landfall? If so, the arteries of brotherhood and thus the capacity to grow our reserves now face rupture. Venezuela beckons.

In that same inaugural address, President Duterte even bound himself and his underlings to the strict observance of the rule of law and the sanctity of contracts: “My adherence to due process and the rule of law is uncompromising.”

“I order all department secretaries and heads of agencies to refrain from changing and bending the rules on government contracts, transactions and projects already approved and awaiting implementation. Changing the rules when the game is ongoing is wrong.”

This is talking the talk of the rule of law and the sanctity of contracts. Walking the walk and staying the course is another matter, but we hoped. President Widodo of Indonesia, already in his second term, stayed the course on the rule of law towards jobs creation. In the Philippines of the post May 2019 election landslide victory, the walk, if at all, is just a chicken walk. 2016 seems so long ago and so far away.

Raul V Fabella is an Honorary Professor of the Asian Institute of Management (AIM), a member of the National Academy of Science and Technology (NAST) and a retired professor of the University of the Philippines. He gets his dopamine fix from hitting tennis balls with wife Teena and bicycling.