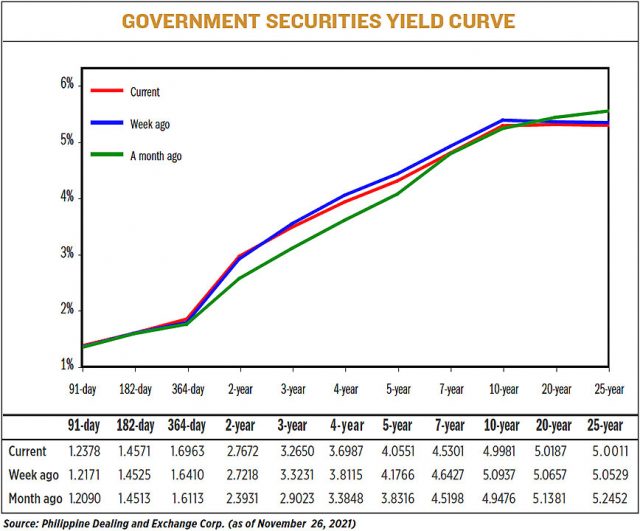 YIELDS on government securities mostly dropped last week due to the Treasury’s borrowing program for December, which showed it plans to raise less funds from the local market.

Debt yields, which move opposite to prices, went down by an average of 4.3 basis points (bps) week on week, based on the PHP Bloomberg Valuation (BVAL) Service Reference Rates as of Nov. 26 published on the Philippine Dealing System’s website.

“Yields in the 5-year and up sector found support as market cheered on the lower debt supply for December.”

The Bureau of the Treasury (BTr) said it plans to raise P70 billion from the domestic market in December, down from the previous month’s program after seeing strong demand for its retail Treasury bond (RTB) offer.

The December borrowing plan is lower than the P200-billion program initially set in November, before the BTr canceled the auctions of P35 billion each in five-year and seven-year T-bonds on Nov. 16 and 23 to give way to the RTB offering.

The Treasury raised an initial P113.545 billion at its price-setting auction on Nov. 16 for its offer of 5.5-year RTBs. This was oversubscribed by more than five times versus the initial P30-billion offer.

“We’re keen on Chairman Powell’s testimony to the Senate Banking Committee next week for any clues on a faster tapering/rate lift-off,” he said in a Viber message. “The threat of a new COVID-19 variant may also weigh on investors’ minds.”

US President Joseph R. Biden said he plans to nominate Federal Reserve Chairman Jerome H. Powell to another term as head of the central bank, through which Mr. Powell would face confirmation hearings with the Senate Banking Committee.

Minutes of the Fed’s recent meeting said officials want to be prepared for a quicker tapering of asset purchases if inflation remains elevated, Reuters reported.

Meanwhile, South Africa’s health minister had announced the detection of a new coronavirus disease 2019 variant, which scientists said had a high number of mutations.

FAMI said flattening pressure on the curve may persist in the near term heading into the listing date of the RTBs.

“We see GS (government securities) yields to remain supported until yearend to early next year in view of inflation falling back within the BSP’s (Bangko Sentral ng Pilipinas) 2-4% target.”

Headline inflation last month slowed to 4.6% from 4.8% in September amid a slower increase in food prices. Still, this was the third straight month inflation exceeded the central bank’s target. — J.P. Ibañez