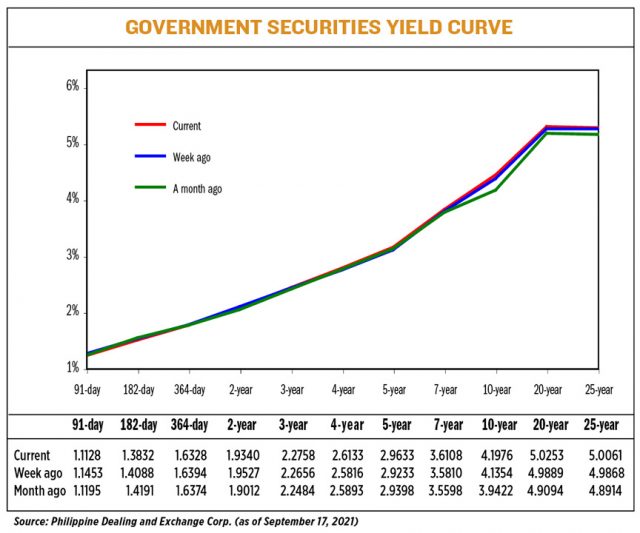 GS yields, which move opposite to prices, inched up by an average of 1.33 basis points (bps) week on week, based on the PHP Bloomberg Valuation Service Reference Rates as of Sept. 17 published on the Philippine Dealing System’s website.

A bond trader said in a Viber message that local GS yields moved within a tight range as market players continued to be “defensive amid a multitude of factors.”

“Aside from the continued rise in COVID-19 (coronavirus disease 2019) cases onshore, inflation concerns have somewhat been reinvigorated due to continued rise in energy prices and elevated prices of select food products. Adding fuel to the fire is also the market trying to time US Federal Reserve’s announcement on tapering, which is expected to be announced sometime within the year,” the bond trader said.

Inflation accelerated to 4.9% in August, its fastest pace in 32 months, driven by higher food and utility prices amid the stricter lockdown that was implemented in Metro Manila and surrounding areas that month. This brought the year-to-date average to 4.4%, still above the Bangko Sentral ng Pilipinas’ (BSP) 2-4% target range this year and its 4.1% forecast for the entire year.

The Monetary Board will have its policy-setting meeting on Thursday.

A second bond trader said local yields tracked the movement of US Treasuries.

“Currently, the US bond movement is about slightly higher by about 1.28% to 1.35% for 10-year, so consequently the local market moved in the same range also, showing the recent issue of the local 10-year paper at [4%],” the second bond trader said in a phone interview.

“[I]f you look at the T-bills, they have been flat for the past four weeks. The short end has been very much supported given the lack of supply but the 7- to 10-year [papers] steepened quite a bit compared to the short end and the belly due to the supply concentration on that curve,” the trader added.

US Treasury yields declined following the lower-than-expected increase in the inflation rate.

Asked whether the Bureau of the Treasury’s (BTr) offering of retail onshore dollar bonds (RDBs) on Wednesday had any effect on the local market, the trader said it was “minimal at this point.”

“[T]here’s still no clarity, and it is hard to gauge whether it’s influencing the local bond movement on a higher degree,” the bond trader said.

The BTr awarded $551.8 million in five-year RDBs and $314.4 million in 10-year notes during the price-setting auction on Wednesday.

The offer period runs until Oct. 1, unless shortened by the Treasury. The RDBs are available at a minimum investment of $300 (P15,000), with increments of $100 thereafter.

The government last offered dollar-denominated bonds onshore was in December 2012, when it raised $500 million from 10.5-year bonds from $1.7 billion in total tenders. The issuance, however, was only available to institutional investors due to the high minimum investment requirement.

The RDB is similar to the peso-denominated retail Treasury bonds that the government offers every year to cater to small local investors.

“Given that the BSP is hell bent on keeping the economy afloat and interest rates at least at low levels, the local market will likely look at the US Fed meeting for September for guidance. At this point, it is really hard to gauge how much the Fed will be addressing its tapering due to higher Delta COVID-19 variant cases… and the weaker jobs that came out this month,” the bond trader said.

“At this point, it is going to range about slightly higher on the local bond for next week, and the curve to continue to steepen quite a bit because of the supply concerns on the 7-10-year paper,” the bond trader added.

The second bond trader said the market is likely to take cues from the policy meetings of the Fed and the BSP.

“Aside from the said meetings, market will also look to the results 7-year auction where it is expected to range around 3.775% to 3.850%. Until any firm developments arise, yields are just expected to continue their consolidation phase,” the second bond trader said.

The Bureau of the Treasury will offer P35 billion in reissued 10-year papers with a remaining life of six years and 10 months on Tuesday. — B.T.M. Gadon