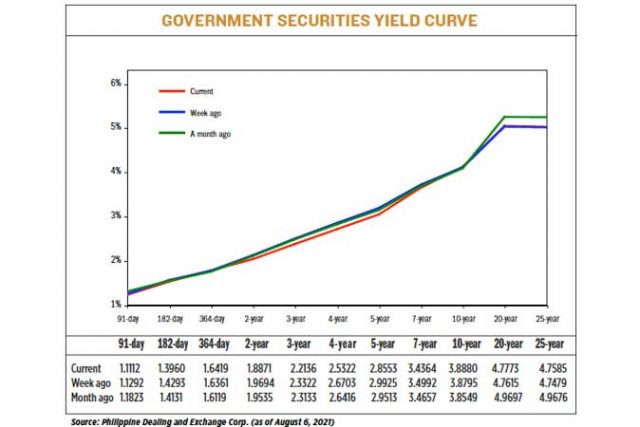 YIELDS ON government securities (GS) at the secondary market went down last week following the release of July inflation data and the government’s reimposition of strict lockdown measures in Metro Manila and nearby provinces.

GS yields, which move opposite to prices, fell by an average of 5 basis points (bps) week on week, based on the PHP Bloomberg Valuation Service Reference Rates as of Aug. 6 published on the Philippine Dealing System’s website.

“Local GS yields dropped, led by strong buying interest on the short and belly end of the curve, on the back of easing inflation expectations onshore after the release of July CPI (consumer price index) print,” a bond trader said via Viber message.

“The drop in local bond yields was also due to the re-imposition of the strictest lockdown measure in Metro Manila from Aug. 6 to 20 to stem the spread of the Delta variant, thereby prompting market players to reassess their bets of a strong economic recovery for the year,” the trader said.

The bond trader added that the Bangko Sentral ng Pilipinas’ (BSP) hints of a possible cut in banks’ reserve requirement ratio was the “icing on the cake.”

“[Last week’s performance] was primarily driven by inflation and the launching of ECQ (enhanced community quarantine), which is expected to dampen economic growth, depending on how long the ECQ will last,” Security Bank Corp. Chief Investment Officer for Trust and Asset Management Group Noel S. Reyes said in a phone interview.

Metro Manila and its nearby provinces are under ECQ from Aug. 6-20 to help curb a surge in COVID-19 cases due to the more transmissible Delta variant.

The reserve requirement for big banks is currently at 12%, still one of the highest in the region. The central bank last cut big banks’ RRR in April 2020 with a 200-bp reduction.

In July 2020, it likewise slashed the reserve requirements of thrift and rural banks by 100 bps to 3% and 2%, respectively.

The BSP’s Monetary Board will have its next policy-setting meeting on Thursday. However, it has adjusted its RRR outside these meetings in the past.

On the other hand, headline inflation eased to a seven-month low of 4% in July, the Philippine Statistics Authority reported on Thursday. This marked the first time since December 2020 that it settled within the BSP’s 2-4% target.

The July result brought year-to-date inflation to 4.4%, still above this year’s target and the central bank’s 4% forecast for this year.

For this week, yield movements will be driven by auctions of government securities as well as the release of data on the economy’s performance in the second quarter.

“We will start the week with the T-bill auction, which will guide direction for yields on the short dates [before] moving on to the seven-year auction and second-quarter Philippine GDP (gross domestic product) print [on Tuesday], which will dictate yield direction for the rest of the curve. Market will also be vigilant and will watch for clues for Thursday’s Monetary Board meeting,” the bond trader said.

The Treasury will auction off P15 billion in T-bills today and P35 billion in fresh seven-year T-bonds tomorrow.

Meanwhile, Security Bank’s Mr. Reyes expects yields to move sideways for the entire duration of the two-week ECQ due to the “ghost month.”

The ghost month is a period in the Lunar calendar when some Asian investors refrain from doing big investments or decisions that coincides with the vacation of fund managers in the West, thereby resulting in lower trading volumes. For this year, it starts on Aug. 8 and ends on Sept. 6. — B.T.M. Gadon