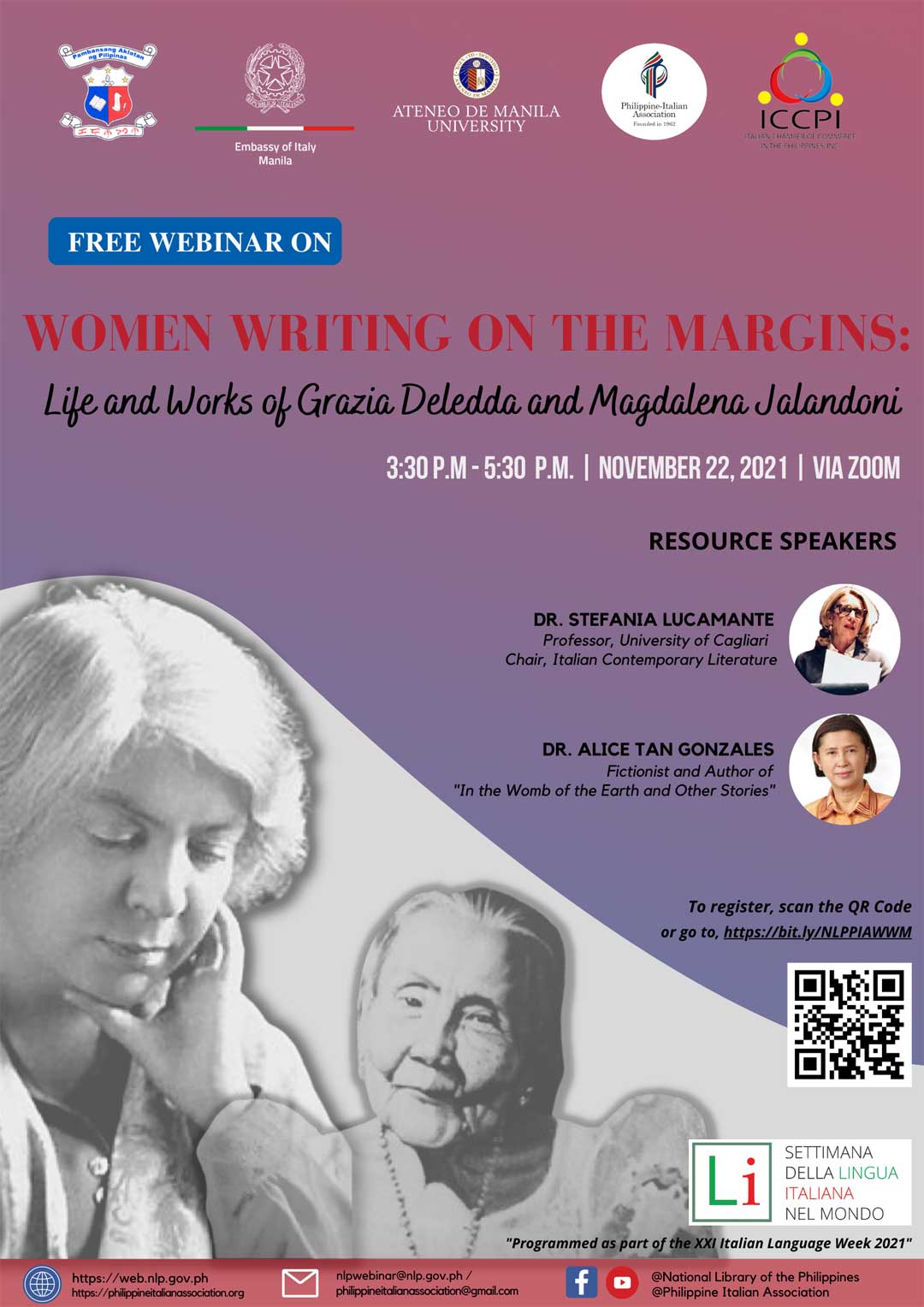 Contemporary women writers are better off than their marginalized counterparts in the past century, yet the latter were still able to negotiate their societal roles through their lives and their works.

Women writers have greater chances of being published nowadays, said Alice Tan Gonzalez, a fictionist and faculty member of the University of the Philippines Visayas.

“We have the internet, more access to libraries… These are obviously different times,” she told the webinar audience. In terms of themes and materials, “women writers are very much exposed to the world.”

The problem, according to Stefania Lucamante, professor of Italian Contemporary Literature at the University of Cagliari in Italy, is that with post-feminism, a lot of women don’t understand how much they have achieved.

“They take too many things for granted in the western world,” she said. “They no longer have the urgency to keep moving forward with feminist issues. We can’t generalize, though.”

Both Deledda and Jalandoni were identified as “writers in the margins” in the aforementioned webinar. The former was marginalized because of her lack of formal education, her gender, and her being Sardinian (a resident of a geographically isolated Italian province with a distinct culture). The latter was marginalized because of her gender, her location (the southern city of Iloilo, far from the country’s capital), and her use of a regional language (Hiligaynon).

The fact that not many of Jalandoni’s works have been translated from Hiligaynon was perhaps why she was disadvantaged as a National Artist for Literature nominee several years back, said Ms. Gonzalez.

“Jalandoni had few cards to deal with,” Ms. Gonzalez told the webinar audience. “She was kept at home and didn’t travel.”

That said, the prolific Hiligaynon poet, playwright, and novelist was still able to negotiate her subject-position throughout her life. When her mother pulled her out of Iloilo High School in the early 1900s because the school was rowdy and merged boys and girls in classes, Jalandoni negotiated her place by continuing to write, eventually publishing her first novel at 16.

Her novel’s happy endings were the author’s negotiation with her real world, which at the time relegated a woman’s primary role to domestic functions such as embroidery and cooking.

“The mores observed by the characters in her novels are those of that [colonial] period… but the negotiations and compromises that these women characters take intimate the position on gender that women readers of a later generation would [also] take,” Ms. Gonzales said.

In Deledda’s novels, meanwhile, Sardinia is presented both as a backdrop and a metaphor for the challenges in her characters’ lives. Ms. Lucamante told the webinar audience that Deledda, who won the 1926 Nobel Prize for Literature, made her readers understand how Italian society was marked by rules that predated Christianity. Sardinian women, in particular, were depicted in her works as brave individuals who did not hesitate to ride horses or use guns when need be.

“Deledda is proud of showing — alongside figures of goodness and modesty — figures of resilience, force, and bravery,” she said, adding that these depictions were based on the early life experiences the author herself witnessed.

Women writers tend to innovate more in their private lives than in their professional ones because of their fear of being labeled, according to Ms. Lucamante.

“Their writing needs to be legitimized, whereas their personal life is their own matter,” she added.

Art Fair Philippines at 10: A return to The Link, a new design, a digital section