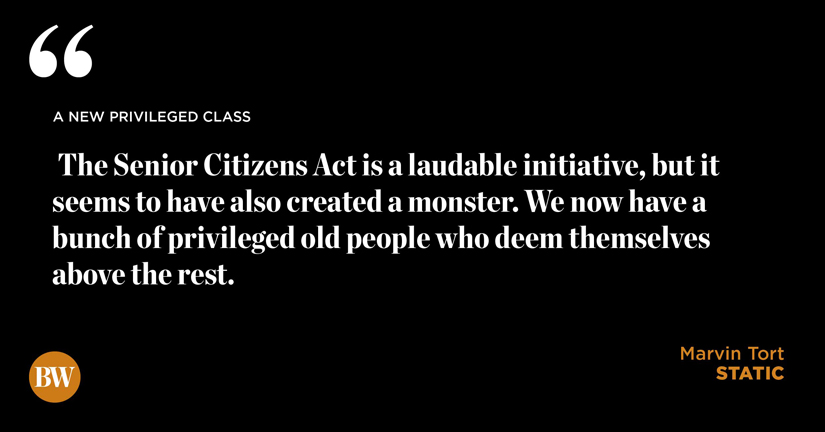 Any idea or initiative, no matter how good or useful, can be prone to abuse. And this is on the part of either the people proposing or implementing the initiative, or the people that are intended to benefit from it. Worse, the negative consequences of such an initiative at times outweigh its benefits, or have unintended economic or social costs.

Let’s take the case of the Expanded Senior Citizens Act of 2010 (Republic Act 9994), which legally made senior citizens or Filipinos aged 60 and above exclusively “entitled” to certain “privileges.” These include a 20% discount on certain goods and services and VAT exemption. Among these goods and services are medicines and medical supplies and services; transportation fares; restaurant food and hotel accommodation; and funeral services.

In commercial establishments without “express lanes” for senior citizens, the law actually requires them to prioritize elderly clients. And thus, when in line, seniors get priority, always, even if this is to the inconvenience of the rest. If you are next in line, for instance, and then a dozen seniors suddenly all walk in, then find yourself going down to No. 13. This may seem unfair, but the law is the law. And commercial establishments are required to follow and obey the law, or risk penalties and fines.

I am actually looking forward to becoming a senior citizen in the Philippines, especially in the city where I live, Makati, since the city government offers additional perks and privileges to its senior citizens that other localities do not. A lunch buffet already reasonably priced at P400 cost only P320 for seniors. My only issue is the fact that the senior citizens act, while a laudable initiative, is also prone to abuse by seniors themselves.

The law has, in a way, created a new “privileged class” with a strong sense of entitlement. And sadly, it appears that some seniors fail to realize that there is a cost to all their benefits, and an economic cost borne also by their younger countrymen who tend to be disadvantaged by the privileges granted by law to their elders.

Even the pension system is skewed to have the younger generation — the working generation — fork out the insurance premiums needed to sustain the retirement benefits and state-administered health insurance privileges enjoyed by seniors. And while retirees can claim that they have likewise contributed to the pension system, the fact remains that by design, the retirement pool is generally sustained by present and continuing contributions.

A while back, I had two seniors at the table next to me at a fine dining restaurant at the Power Plant Mall at Rockwell. They ordered food, which was obviously for more than two people, and then opted to pay their bill even as they were still halfway through their meal. As they ended their meal, with plenty of leftovers on the table still, they called in about three people (non-seniors) waiting outside to join them.

At the time they paid for their meal, the full discount could have applied to the entire bill — 20% across the board since only two seniors (both entitled to discount) were dining at the time. Immaterial is the fact that the food ordered was obviously for more than two. And then, with the bill already paid, three other diners (non-seniors) joined in.

I make no judgments here, but it was obvious that the two seniors could easily afford a meal for five at full price. And yet, they seemed to have found a way to “game” the system, or to manipulate it to achieve a desired outcome. What they did was not illegal, but can we consider it an abuse of their privilege? Call them out on what they did, and I am certain they will argue that they did nothing wrong and that they were entitled to the privilege, anyway.

On another occasion, the basement parking at Waltermart on Chino Roces Avenue was full. All the senior parking slots were also taken. In drove a senior, who could not find a parking slot. He chose to double-park, or park where he shouldn’t, and then left his car. When the security guard went after him, he complained that there wasn’t enough parking for seniors, and that his legs already hurt. He refused to move his car. Again, what he did was not illegal, and under the law, he can insist on priority in parking space. But his act of double-parking, and then leaving his car, to the inconvenience of others, was it an abuse of the privilege?

What takes the cake, however, is an incident that I observed just the other day, also at Waltermart. At the second floor, just outside the supermarket, are tables and chairs primarily for the use of people to dine on after they buy food from the outlets. Day in, day out, however, seniors camp out in the area, practically the whole day. While this is not illegal, it is to the inconvenience of people who actually buy food but have nowhere to sit to eat.

The other day, two seniors or “regulars” were occupying a table for four. One of them stood up to buy something. A pregnant woman walked over to ask if the table could be shared so she could also sit. To my surprise, the elderly woman seated at the table, while on the phone, waived her off, claiming that the two seats in front of her were reserved as they were already occupied.

But, when her male companion returned, they both occupied only two of four seats, while another seat was occupied by the old woman’s bag. In fact, one more seat was actually available, and the pregnant woman could have used it, but she was waived off as obviously the old woman did not want to share “her” table. The pregnant woman, perhaps trying to avoid an argument, just walked away.

This, to me, is the height of insensitivity and inconsideration. And sadly, this is not an isolated incident. A woman, a senior with a walking disability, refusing to share an available seat with a younger but very pregnant woman just to keep the exclusivity of “her” table? While I felt sorry for the pregnant woman, I felt even more sorry for the senior woman for her lack of compassion.

The Senior Citizens Act is a laudable initiative, but it seems to have also created a monster. We now have a bunch of privileged old people who deem themselves above the rest, and at every opportunity, should always get priority and consideration. And while we complain about brats and the sense of entitlement of the young, we shouldn’t be too surprised given that even some of our elders also act the same way now.

Marvin Tort is a former managing editor of BusinessWorld, and a former chairman of the Philippines Press Council.