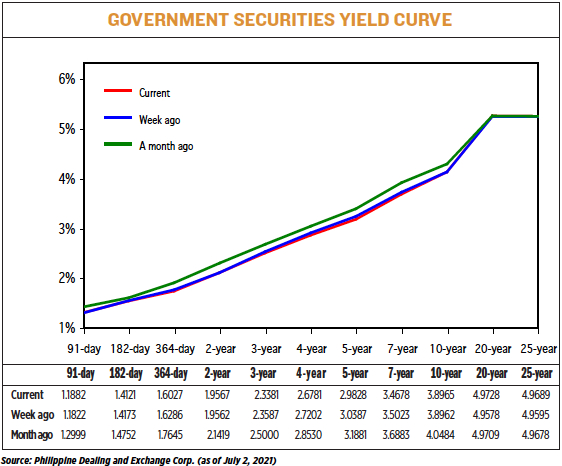 YIELDS ON government securities (GS) were mixed last week following end-of-month positioning and ahead of the release of June inflation data.

GS yields at the secondary market fell by 1.39 basis points (bps) on average week on week, based on the PHP Bloomberg Valuation (BVAL) Service Reference Rates as of July 2 published on the Philippine Dealing System’s website.

“[Last] week was characterized by consolidation as a result of month-end and first half of the year-end positioning by the middle of the week as well as inflation talks getting heated as July commenced,” Security Bank Corp. Chief Investment Officer Noel S. Reyes said in a Viber message.

A bond trader shared this view, adding “the bias for yields towards the end of [last] week was on the downside as dealers begin to reinstate positions ahead of the CPI (consumer price index) release on Tuesday.”

Bangko Sentral ng Pilipinas (BSP) Governor Benjamin E. Diokno last week said the central bank expects June headline inflation to range between 3.9% and 4.7% for a point projection of 4.3% as electricity and fuel costs remained high. If realized, June could mark the sixth straight month of inflation going beyond the BSP’s 2-4% target for the year.

Yield movements this week will mostly hinge on the June inflation report on Tuesday, analysts said.

“We expect yields to trend sideways with downward bias [this] week until we get clarity on the direction of CPI for the second half of 2021,” the bond trader said.

Mr. Reyes said the upcoming inflation data is “crucial” and will dictate the trend moving forward.

“A strong CPI number above 4.5% will trigger higher yields,” he said. — Ana Olivia A. Tirona

Malagos, Davao packs its cheese-tasting events in a box