Home One News Marcos is likely to pursue a liberal economic agenda despite protectionist bent... 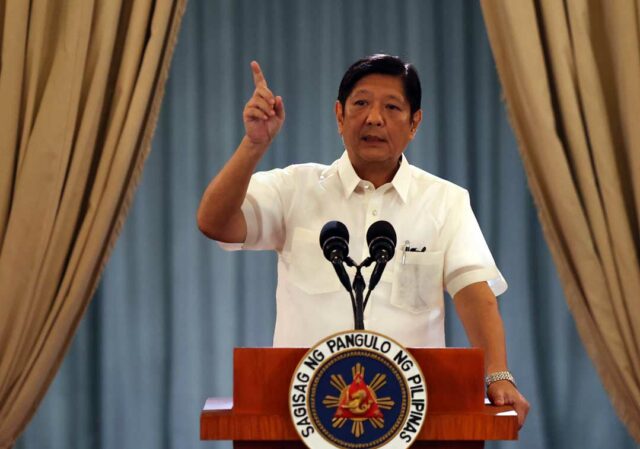 This, despite concerns over local firms’ competitiveness in the global market.

“The mainstream thinking within the government, and most definitely within the economic team, is that increased trade and more foreign investments will be the main drivers of our economic recovery and will pave the way for the high growth that is envisioned,” Joseph Purugganan, program coordinator at the think tank Focus on the Global South, said in an e-mail.

“The push to liberalize the economy will continue.”

President Ferdinand R. Marcos, Jr. has vowed to boost local food production and limit imports “as much as possible.” He also promised to work closely with the private sector and make the Philippines an investment destination.

“We consider [his statements] that sound protectionist as populist rhetoric intended to maintain a level of popular support but will not go deep enough,” Mr. Purugganan said.

Despite Mr. Marcos’ plan to boost local production, he has not supported moves to repeal the Rice Tariffication Law, a policy that has been criticized by agricultural stakeholders.

He said he expects Mr. Marcos to “project a firm belief in opening up the economy and letting the corporate sector drive development, while also trying to project a willingness to act and utilize state power, when necessary, particularly in times of emergency or crisis.”

Duke Ronald R. Cocoto, who teaches economics at the Ateneo de Manila University, said Mr. Marcos might soon view importation as a solution to “quickly ease financial pressure on local consumers amidst elevated inflation” and enhance competition that could force local players to boost the quality of their output.

“In this post-pandemic stage where inflation has been one of the country’s biggest challenges, it could be expected that talks on bills to further liberalize the economy would resume, especially if this would cater to the socioec-onomic agenda of the Marcos administration such as protecting the purchasing power of Filipinos,” he said in a Messenger chat.

Mr. Marcos, who is also Agriculture secretary, has rejected a plan by the Sugar Regulatory Administration (SRA) to allow importation of up to 300,000 metric tons (MT) of raw and refined sugar, which was aimed at easing tight supply and bringing down prices.

In a vlog posted on Sunday, Mr. Marcos said he is open to additional sugar imports of only around 150,000 MT.

Mr. Marcos is expected to follow in his predecessor Rodrigo R. Duterte’s footsteps and continue his liberal economic programs.

Trade Secretary Alfredo E. Pascual said last month that the ratification of the Regional Comprehensive Economic Partnership (RCEP) is a priority, even as Mr. Marcos earlier said he wants it reviewed to ensure the agriculture in-dustry is protected.

“With the ratification of RCEP deemed as a priority, the Marcos administration is expected to strike a balance between protecting certain sectors and opening up the economy especially if it wishes to become an investment destination in Asia while creating quality employment for Filipinos,” Ateneo’s Mr. Cotoco said. — Kyle Aristophere T. Atienza

Peso falls to new record low of P59 vs US dollar

Gov’t told to increase budgets of oversight bodies vs corruption