Data released by the Bangko Sentral ng Pilipinas (BSP) on Monday showed cash remittances sent through banks stood at $2.75 billion in June, 4.4% up from $2.64 billion in the same month in 2021.

The amount is the biggest since the $2.99-billion remittances logged in December 2021. 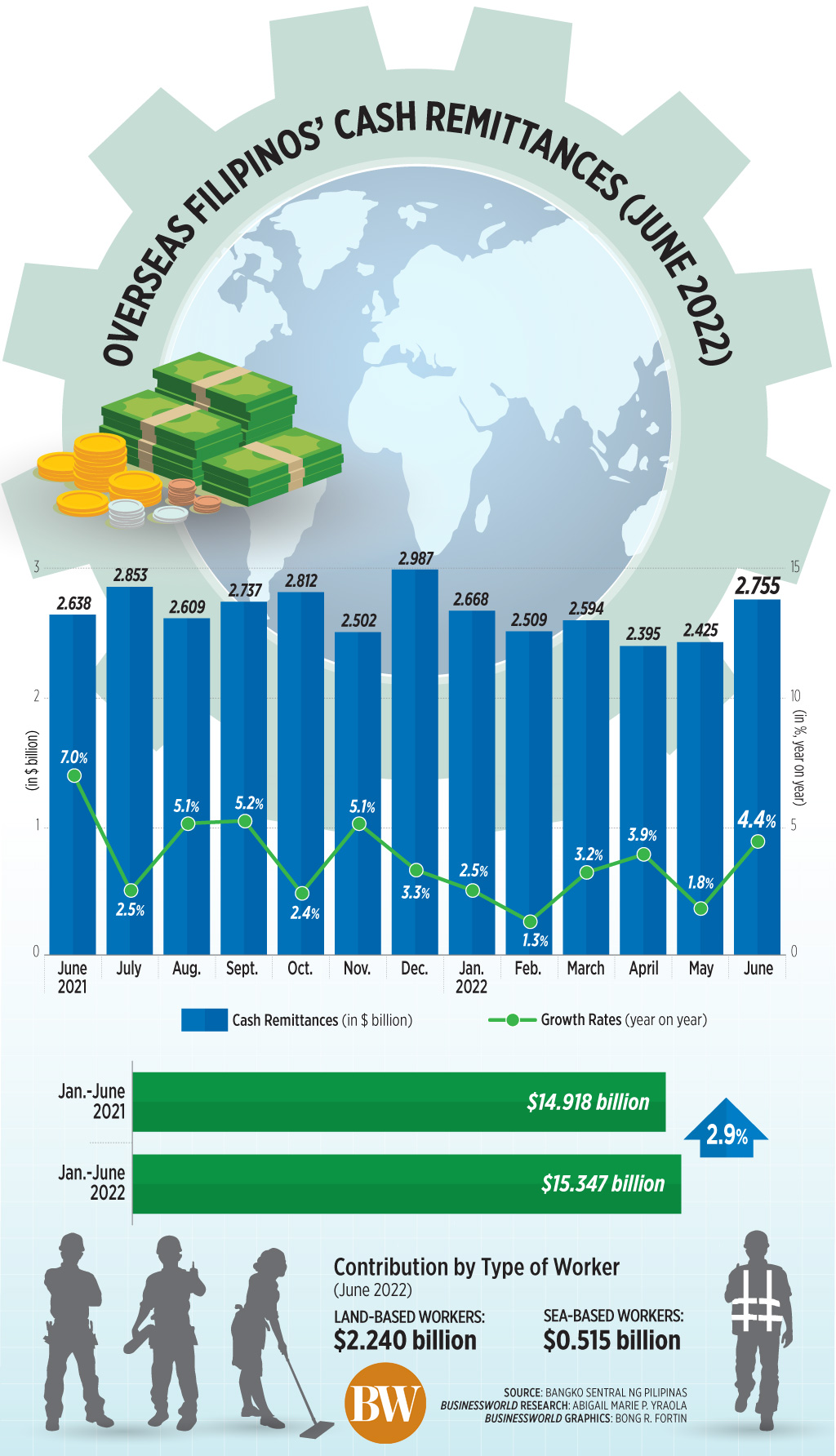 The growth in cash remittances was also the fastest in seven months or since the 5.1% rise seen in November 2021.

“The expansion in cash remittances in June 2022 was due to the growth in receipts from land-based and sea-based workers,” the BSP said in a statement on Monday.

In June, remittances from land-based workers jumped by 4.9% year on year to $2.23 billion, while money sent by sea-based workers increased by 2.6% to $514 million.

“Overseas Filipinos may have sent more back home to help beneficiaries cover expenses given the rise in cost of living back home,” ING Bank N.V. Manila Senior Economist Nicholas Antonio T. Mapa said in an e-mail.

Inflation accelerated to 6.1% year on year in June, from 5.4% in May and 3.7% a year ago as food and fuel prices soared. June inflation exceeded the Bangko Sentral ng Pilipinas’ (BSP) 2-4% official target range for a third straight month.

“However, whatever gains OFWs and their families may have due to more peso proceeds for their US dollars or foreign currencies may be offset or negated by higher inflation,” Rizal Commercial Banking Corp. (RCBC) Chief Economist Michael L. Ricafort said in a note.

“This suggests that even with the favorable exchange rate, OFWs are still sending home more remittances, possibly due to surging inflation and more expenses such as the impending return to school,” Mr. Mapa said.

UnionBank of the Philippines, Inc. Chief Economist Ruben Carlo O. Asuncion said the uptick in remittances may have been caused by the weaker peso, which encouraged OFWs to send more remittances.

“I also think that the return-to-school costs may also have something to do with it,” he said.

For public schools, the school year will start on Aug. 22.

This brought personal remittances 2.8% higher to $17.09 billion in the first half of the year, from the $16.61 billion recorded in the comparable period in 2021.

“We’re expecting remittances to grow despite the external environment challenges. We may see inflows growing within the range of 1-4% in the coming months and average between 2-4% this year,” Mr. Asuncion said.

However, Mr. Ricafort said a likely recession in the United States could hurt OFWs in the coming months.

“Going forward, the risk of recession in the US, which is the world’s largest economy, could potentially reduce jobs or employment prospects for OFWs and could also potentially slow down OFW remittances,” Mr. Ricafort said.

The central bank expects remittances to grow by 4% this year. — Keisha B. Ta-asan

Monkeypox spread no reason to shun pride parades — WHO