The S&P Global Philippines Manufacturing Purchasing Managers’ Index (PMI) reading stood at 50.8 in July, lower than the 53.8 reading in June.

While the PMI remained in expansion territory in July, the reading was the lowest in six months. Excluding the flat reading in January, S&P Global said the July PMI was the weakest in 11 months. 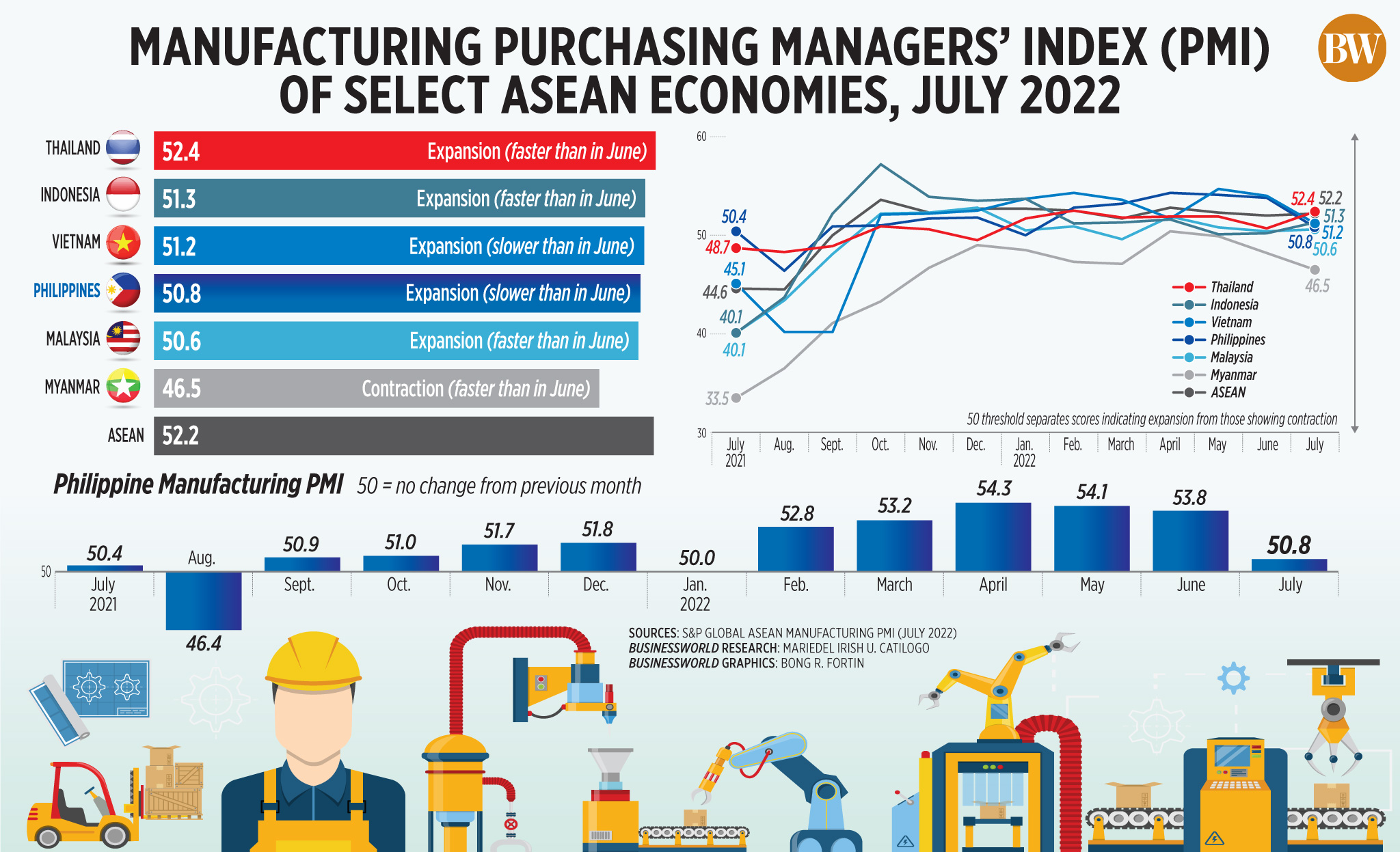 A PMI reading above 50 denotes improvement in operating conditions compared with the preceding month, while a reading below 50 signals deterioration.

“Data from the latest PMI survey indicated a loss in growth momentum at goods producers in the Philippines. Renewed contractions in output and new orders, albeit only mild, were recorded in July. The headline figure slipped to 50.8 in July to signal the slowest expansion since January,” Maryam Baluch, economist at S&P Global Market Intelligence, said in a statement.

S&P Global said last month’s contraction in output and new orders was the first since January. “The rates of reduction were modest but signified a visible change from the strong expansions seen in June, amid challenging demand conditions,” it said.

“While the pace of decrease was the softest in the current five-month sequence of contraction, global uncertainties and the ongoing impact of the pandemic continued to weigh on export demand,” S&P Global said.

Manufacturers’ buying activity was muted in July, as they had less business requirements and prices of materials rose.

Despite the slowdown, S&P Global said Philippine firms added more workers for a third month in a row in July. The additional workers helped companies to clear their existing backlogs at a faster pace.

“Overall, muted growth across the Filipino manufacturing sector, adds caution to the air as inflationary pressures continue to heat up,” Ms. Baluch said.

Inflation likely accelerated by 5.6-6.4% in July amid higher food prices, transport fares and the peso’s depreciation against the US dollar, the Bangko Sentral ng Pilipinas (BSP) said on Friday.

“July PMI is showing the impact of inflationary pressures. Production levels have fallen and output has dropped together with new orders,” UnionBank of the Philippines, Inc. Chief Economist Ruben Carlo O. Asuncion said in a Viber message.

“One good development was the firms continued to increase workforce requirements to clear out backlogs and with confidence remaining upbeat despite the near-term headwinds,” Mr. Mapa said in an e-mail.

Amid signs of weakening demand, S&P Global noted that Philippine firms’ outlook for the next 12 months rose to a seven-month high in July.

“Firms stated that stronger expectations were underpinned by hopes of greater customer demand. That said, sentiment was weaker than the series average,” it said.

“This could potentially impact growth momentum and demand in the coming months, which continues to find its bearing as the COVID-19 (coronavirus disease 2019) shocks subside,” she added.

In a separate note, Capital Economics said most manufacturing PMIs for July dropped “amid further signs that global demand is weakening.”

“With global growth set to slow further and domestic interest rates set to continue rising, the region’s industrial sectors face a tough year ahead… One common factor from the July PMIs was once again the weakness of the new export orders component, which was below 50 in five of the seven countries,” Capital Economics said. — K.B.Ta-asan

Peso slumps to lowest since 2005