THE PHILIPPINE manufacturing sector in April posted its best performance in over four years, reflecting the significant improvement in business conditions as pandemic restrictions eased.

S&P Global Philippines on Monday said the Philippines Manufacturing Purchasing Managers’ Index (PMI) rose to 54.3 in April, from 53.2 in March, as new orders and production increased. 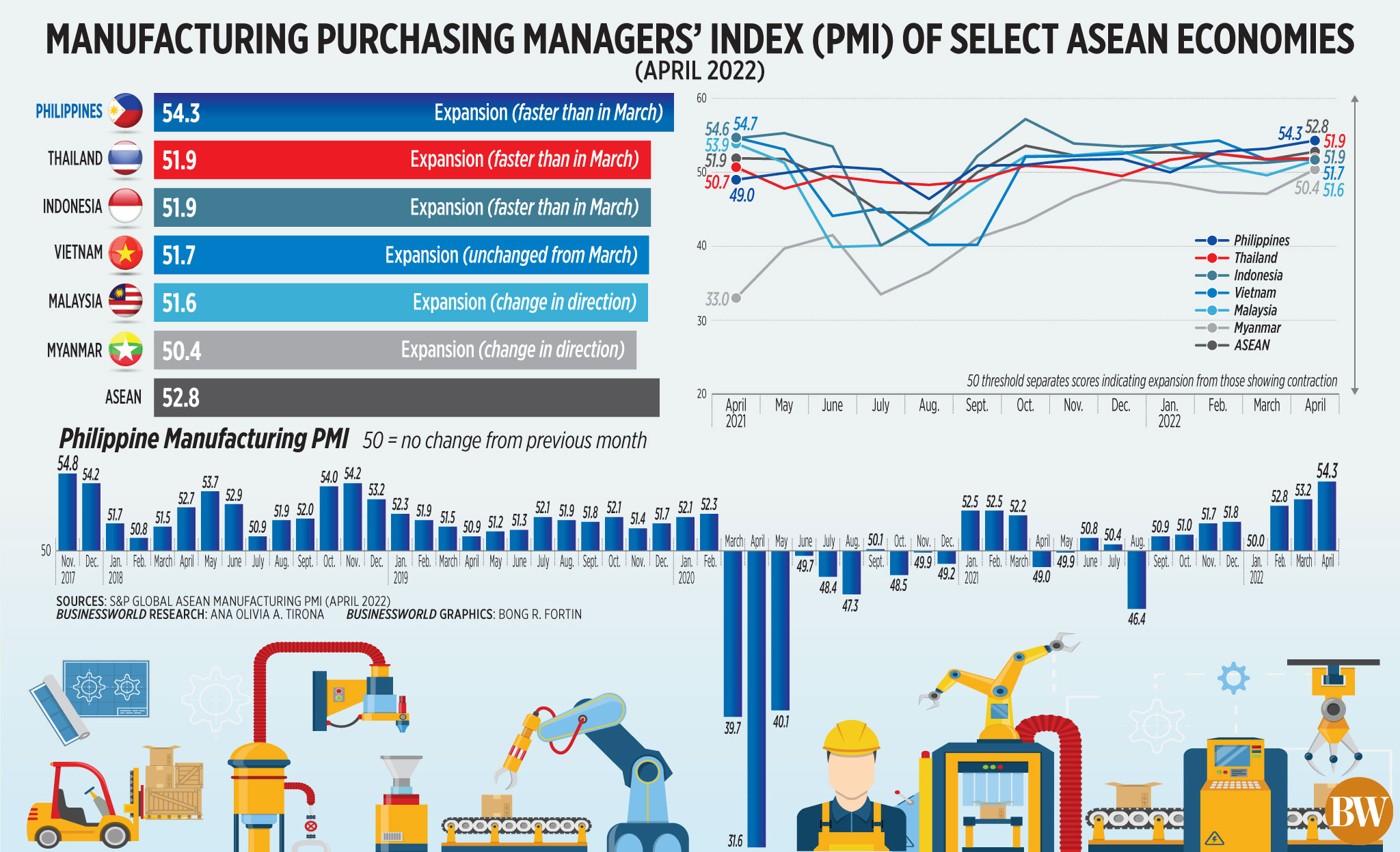 April was also the third consecutive month that the PMI was above the 50 mark, which separates growth from contraction.

“Looser pandemic restrictions led to a stronger improvement in operating conditions across the manufacturing sector in the Philippines at the start of the second quarter,” S&P Global economist Maryam Baluch said in a report released on Monday.

S&P Global said output and new orders went up for the third month in a row, both with the quickest growth rate since November 2018. It cited anecdotal evidence that more relaxed coronavirus restrictions supported higher customer demand and production.

Metro Manila and most parts of the country have been under the most lenient alert level since March, as coronavirus disease 2019 (COVID-19) infections remained low.

“Although output growth picked up in April, global headwinds, notably from the Russia-Ukraine war and lockdowns in China, led to further pressure on supply chains,” Ms. Baluch said.

Raw material shortages and supply chain disruptions also delayed delivery times, but S&P Global said that lead times were the least severe in nearly two and a half years.

Buying activity grew at the fastest pace in over three years, as firms’ production requirements increased. S&P Global also noted firms raised their stocks of raw materials and semi-finished items at the quickest pace since the survey began in January 2016.

S&P Global also said there was no change in employment numbers across the Philippine manufacturing sector, ending 25 straight months of job losses. However, there are still reports of widespread worker resignation, which affected companies’ ability to expand.

“The rate of input cost inflation eased only slightly from the record high seen in March, leading to another sharp increase in selling prices…It will be important to see how growth momentum is sustained amid ongoing supply chain disruption and sharply rising costs,” Ms. Baluch said.

S&P Global said business confidence in the next 12 months improved to a four-month high in April.

ING Bank N.V. Manila Senior Economist Nicholas Antonio T. Mapa said in an e-mail that output and new orders picked up “considerably” due to the reopening of the economy and lower number of COVID-19 cases.

“We note, however, that the supply chain disruptions caused by the ongoing conflict in Ukraine have already caused longer lead times for inputs, which could eventually slow output and fan price pressures further,” he said.

Rizal Commercial Banking Corp. Chief Economist Michael L. Ricafort said the manufacturing sector’s recovery was supported by the implementation of the most lenient alert level in most areas of the country.

“Unemployment rate at the lowest since the pandemic started supported and reflected the manufacturing PMI gauge at new pre-pandemic highs, as also supported by near record-high OFW remittances and exports data,” he said via Viber.

Mr. Ricafort said a nationwide Alert Level 1 and other measures to further reopen the economy would help minimize the impact of the Russia-Ukraine war on the Philippines, as well as help drive the manufacturing sector’s recovery.

ASIA FACTORY ACTIVITY
Meanwhile, Asia’s factories managed a fitful recovery in April that highlighted their economies’ resilience to the impact on global supply chains of China’s lockdowns and conflict in Ukraine.

Manufacturing hub South Korea’s PMI climbed to 52.1, according to S&P Global, recovering some ground lost from a sharp drop in March. Price and supply pressures were exacerbated by Russia’s war on Ukraine and China’s expanding COVID restrictions, it added.

Manufacturing PMIs advanced in Myanmar and Australia. Only Taiwan proved an outlier — reflecting its deep economic links to China — reporting its lowest reading since July 2020.

Asia-Pacific economies, which include some of the world’s top exporters, largely held up through April. The impact from weaker activity in China — the top trading partner for much of the region — was offset by renewed demand in other key markets such as the US.

China remains a significant risk as the latest surge in COVID cases and subsequent lockdowns threatens to choke off supply chains and restrain trade.

“While strengthening client demand has been able to support the recovery so far, it will be important to see how growth momentum is sustained amid ongoing supply chain disruption and sharply rising costs,” said Ms. Baluch.

The April PMI releases are scattered across several days given holidays across the region, including Eid al-Fitr in Southeast Asia’s biggest economy, Indonesia. Thailand’s PMI is set for release on Tuesday, with Vietnam and Indonesia following on Wednesday and Malaysia’s due on Thursday.

The fallout from China’s latest COVID struggles was evident in the nation’s manufacturing data, with a gauge of factory activity plunging to the lowest level in more than two years in April, data released over the weekend showed.