FACTORY OUTPUT GROWTH slowed for a second straight month in January, amid the reimposition of tighter mobility curbs due to the Omicron-driven surge in coronavirus cases.

Preliminary data from the Philippine Statistics Authority’s (PSA) Monthly Integrated Survey of Selected Industries (MISSI) showed manufacturing, as measured by the volume of production index (VoPI) grew by 16.5% year on year in January.

This was slower than December’s revised 21.3% growth but a turnaround from the 14.5% contraction recorded in January 2021. 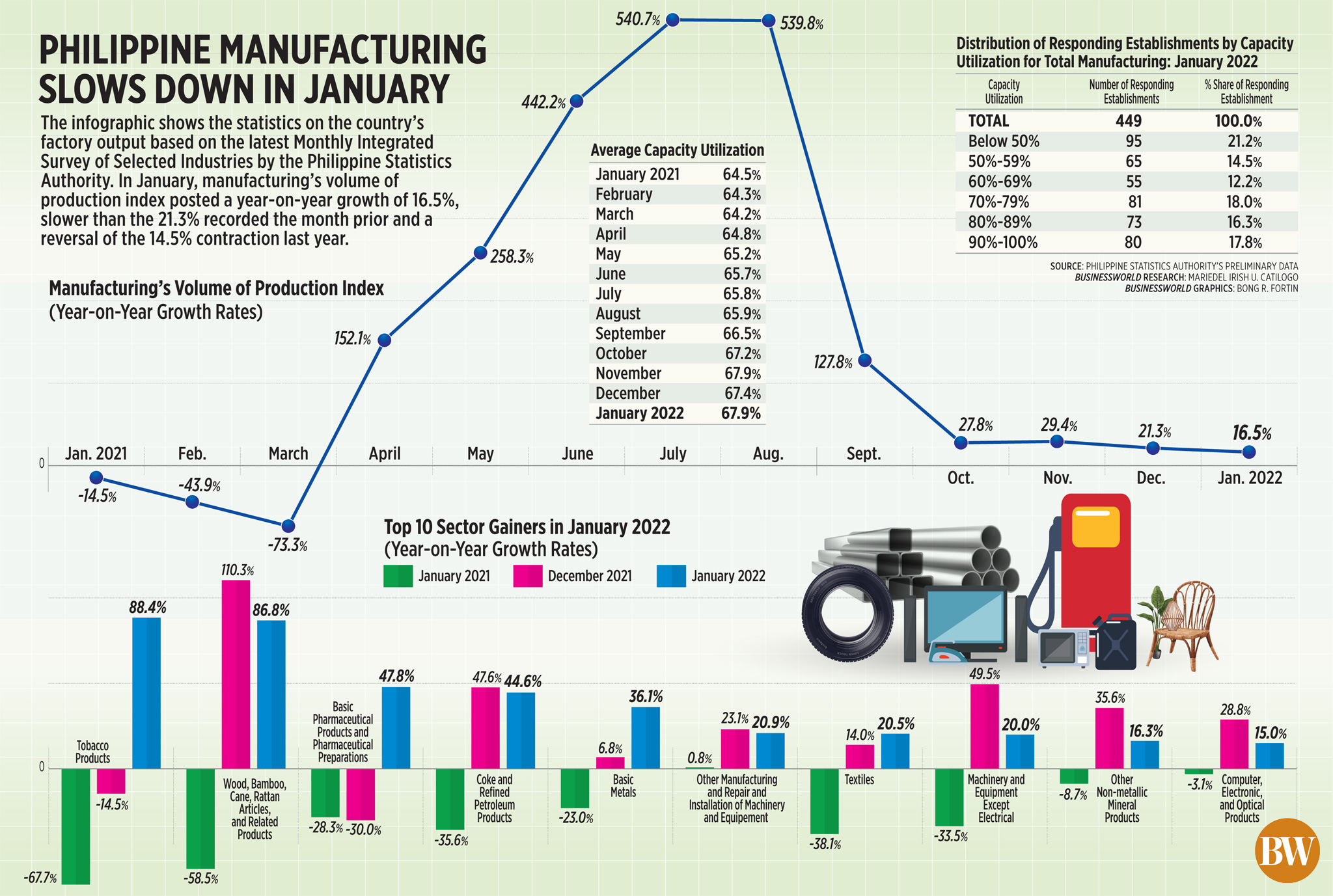 This was the second straight month the VoPI recorded slower growth. It also marked the 10th consecutive month that factory output posted a positive reading.

“This slowdown is mainly due to the Omicron surge last January when the government declared more restrictions and dampening the momentum of manufacturing growth in December,” UnionBank of the Philippines, Inc. Chief Economist Ruben Carlo O. Asuncion said in an e-mail.

Metro Manila and other areas of the country were placed under a stricter Alert Level 3 in January, as the more contagious Omicron variant pushed daily infections to record levels.

“Manufacturing is leaning towards recovery despite a slower growth, compared with January 2021,” Federation of Philippine Industries (FPI) Chairman Jesus L. Arranza said in a Viber call. “But due to the Omicron variant, which spreads faster than previous variants, it led to the surge in cases.”

Market watchers expected this slowdown in January as it was signaled by the manufacturing purchasing managers’ index (PMI) data for that month, Mr. Asuncion said.

The country’s manufacturing PMI ended four consecutive months of growth after registering a score of 50 in January, which signified no change in manufacturing conditions from the previous month. The 50 reading separates manufacturing expansion from contraction.

The capacity utilization — the extent to which industry resources are used in producing goods — averaged 67.9% in January, faster than the revised 67.4% in the previous month. Of the 22 sectors, 20 averaged a capacity use rate of at least 50%.

Both analysts expect a steady recovery for manufacturing in February and March as most parts of the country shifted to a more relaxed Alert Level 1. However, they warned about the impact of Russia’s invasion of Ukraine, especially the surge in global oil prices.

The capital region and surrounding areas were downgraded to Alert Level 2 in February, and to the most relaxed Alert Level 1 starting March.

“The risks brought about by the uncertainties due to the Ukraine-Russia conflict may rear its ugly head and we may see a slight slowdown in manufacturing demand growth,” Mr. Asuncion said.

“I think manufacturing will post a steady growth in the coming month (February) as occupancy is nearing 100%,” Mr. Arranza said.

“Looking further, I don’t think the spike in oil and fuel prices will have a huge effect on manufacturing as it’s more on the logistics side, but pacing might become slower,” he added.

To impeach or remove: How to get rid of a public official