MANUFACTURING ACTIVITY in the Philippines rebounded to its highest level in over three years in February, as demand and production picked up amid the further easing of mobility restrictions.

The IHS Markit Philippine Manufacturing Purchasing Managers’ Index (PMI) jumped to 52.8 in February, from 50 in January. This was the highest PMI reading since the 53.2 posted in December 2018.

A reading above 50 indicates an improvement in conditions for the manufacturing sector versus the previous month, and below the threshold means the opposite. 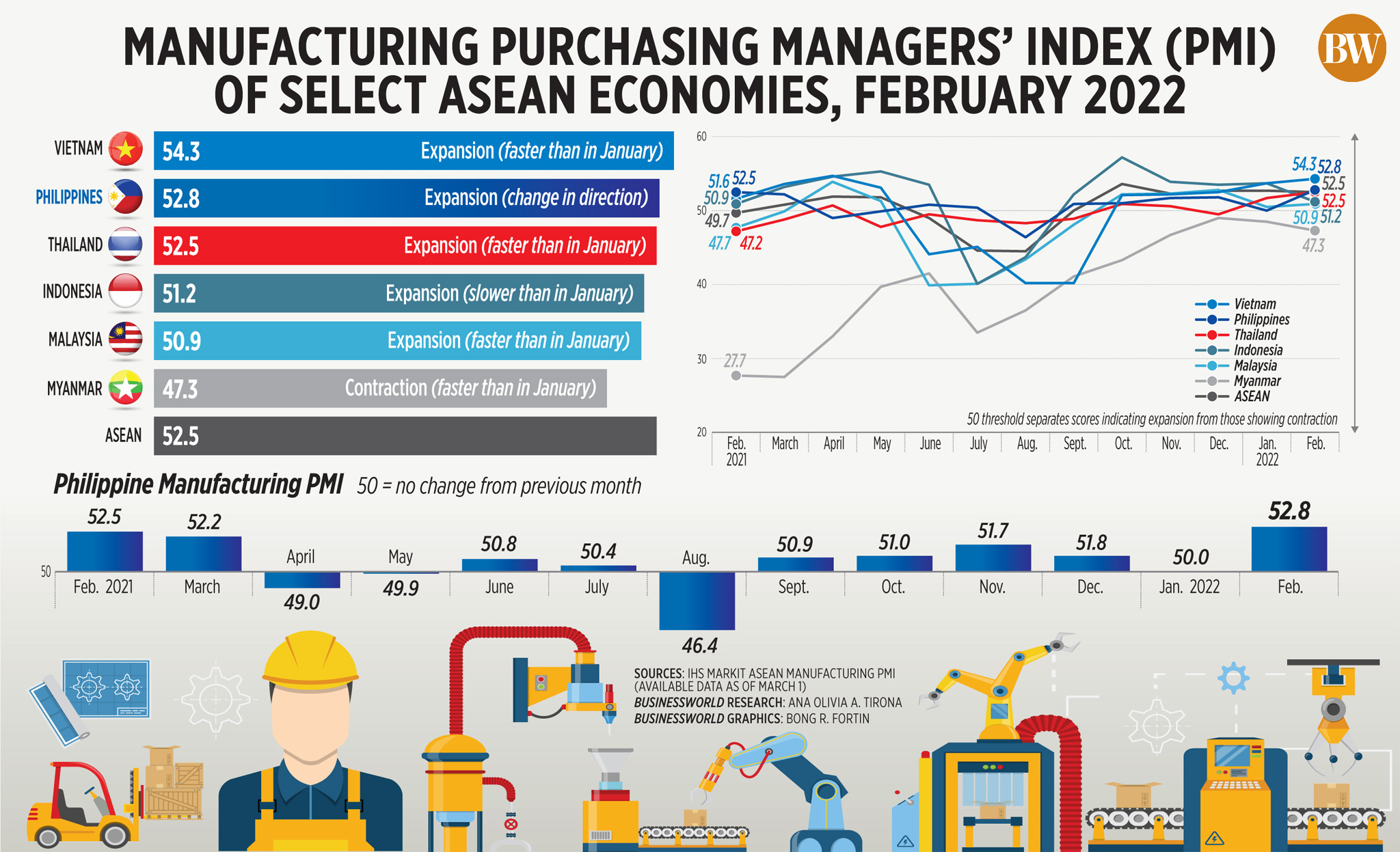 “February data revealed a return to growth for the Philippine manufacturing sector with the PMI rising to the highest in over three years. There were many key takeaways from the latest data but central to the improvement were solid expansions in both output and new orders,” Shreeya Patel, an economist at IHS Markit, said in the report released on Tuesday.

She attributed the strong growth to looser restrictions in February.

Metro Manila and nearby provinces were under a more relaxed Alert Level 2 in February, as the Omicron-driven surge in coronavirus infections subsided.

IHS Markit noted a sharp rise in purchasing activity among manufacturers who are anticipating greater demand in the next few months.

“Inflationary pressures were historically elevated which forced firms to push through hikes in selling charges,” she said. The higher prices of energy, raw materials, fuel and transport fueled a sharp rise in costs during the month.

Employment levels also continued to drop, with the latest decline the quickest in five months.

“Voluntary resignations continued, which has been seen since the pandemic hit the Philippines’ economy two years ago. Fortunately, production does not seem to have been impacted by staff shortages and firms are keeping backlogs at bay,” Ms. Patel said.

Philippine manufacturers continue to be optimistic about their long-term growth prospects, but the degree of optimism was below the series average, IHS Markit said.

SECOND IN ASIA
The Philippines’ PMI was the second-best reading among six Southeast Asian countries for the month, after Vietnam’s 54.3. It also exceeded the region’s average of 52.5.

Thailand, Indonesia and Malaysia all expanded in February, while Myanmar remained in contraction.

“Manufacturing conditions in ASEAN (Association of Southeast Asian Nations) improved strongly in February, with the PMI remaining among the highest on record as output rose solidly again amid the fastest upturn in new work since last October,” Lewis Cooper, an IHS Markit economist, said in a separate report.

Mr. Cooper said the survey’s price indicators showed a sharp increase in costs facing ASEAN goods manufacturers. “As a result, firms again raised their selling prices, with the rate of inflation the steepest on record,” he added.

Alex Holmes, Asia economist of Capital Economics, said the February PMIs showed that the Omicron surge had less of an economic impact than previous waves and that the industry would strengthen in the first quarter.

“The strong rebound in the Philippines PMI in February, as cases fell back, suggests growth will be quick to pick up again,” he said in a note.

Mr. Holmes said demand for Asian goods might ease in key markets. “But while there are signs of fewer new backlogs, this has only recently begun, and the sheer size of existing unmet orders means that producers will be kept busy for months to come. This will cushion the blow and means regional industrial output and exports are set to hold up well for at least the next couple of quarters,” he added. — Tobias Jared Tomas