PHILIPPINE AGRICULTURAL output contracted by an annual 1.5% in the second quarter due to a slump in livestock and fisheries production, the Philippine Statistics Authority (PSA) said on Monday.

In a report, the statistics agency said the value of agricultural production at constant 2018 prices declined by 1.5% during the April to June period, a reversal of the 0.5% growth during the same period in 2020.

“Decreases in the production levels were noted for livestock and fisheries. Meanwhile, production of crops and poultry posted increases during the period,” PSA said. 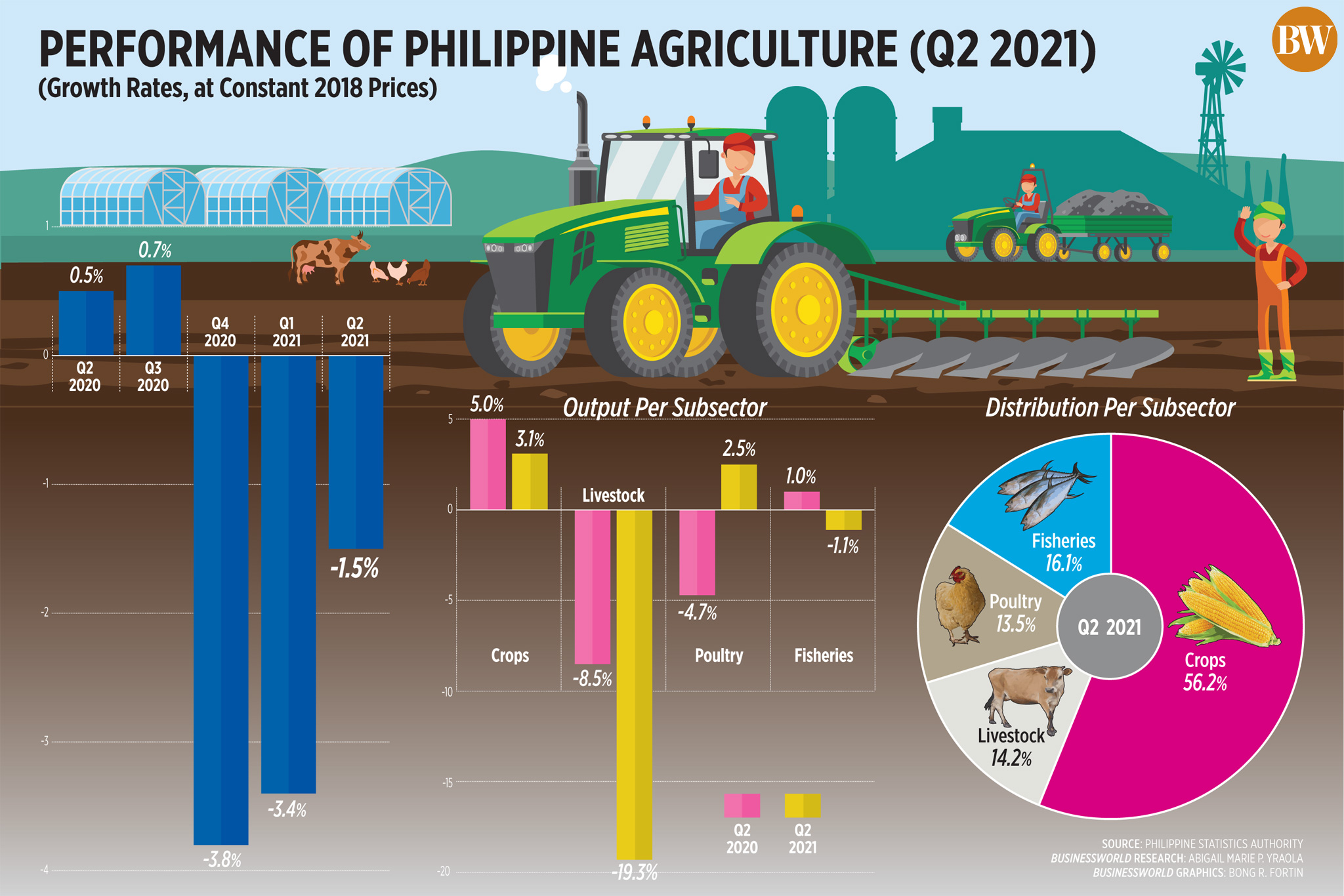 However, the second-quarter agricultural output drop is a slight improvement from the 3.4% decline seen in the first quarter.

At current prices, the value of agricultural production stood at P503.3 billion in the second quarter, up 7.2% year on year.

The PSA is scheduled to release second-quarter gross domestic product (GDP) data on Tuesday morning. Agriculture usually contributes around a tenth to GDP.

For the first half, the value of agricultural production contracted by 2.5%, worse than the 0.6% drop a year ago.

Livestock production, which accounted for 14.2% of total farm output, slid by 19.3% in the April to June period. For the six-month period, livestock output declined by 21.4%, worse than the 4.5% contraction seen during the same period a year ago.

The ASF outbreak continued to affect the industry, with hog production falling 26.2% in the second quarter. In contrast, double-digit growth was seen for cattle (32.6%), carabao (26.2%), and goat (23.4%) production.

“Many hog raisers are still scared due to the risk of ASF and with low consumer demand brought by the COVID-19 pandemic,” Mr. Tambago said.

“Further, with the major consuming population affected by lockdowns, and with the entry of cheap pork imports, local pork producers just cannot compete in terms of production,” he added.

Fisheries output, which accounts for 16.1% of overall agricultural production, also slipped by 1.1% in the second quarter. For the first half, fisheries production dipped by 0.5%, easing from the -0.9% a year earlier.

“We are continually losing access to this fishing area. The other is water temperature in our seas. While warmer waters aid in food digestion in fish, there is a limit to this. Dissolved oxygen decreases as sea and freshwater temperature rises. This is stressful and could kill or develop diseases among fish,” Mr. Kempis said in a mobile phone message.

Meanwhile, crops and poultry production were bright spots for the agriculture sector in the second quarter.

Accounting for more than half of total agricultural output, crop production rose by 3.1% in the April to June period and by 3.2% in the first half.

Mr. Kempis said higher crop output can be attributed to the generally good weather in the second quarter.

“With good prices because of good quality harvest plus more quantity harvested, overall value of rice and corn rises,” he said.

Poultry production, which shared 13.5% of overall farm output, jumped 2.5% for the quarter. However, for the first half, poultry output fell by 2.6%.

Rolando T. Dy, executive director of the Center for Food and Agri-Business of the University of Asia and the Pacific (UA&P), said in a mobile phone message that poultry production improved after a shift in demand when pork prices spiked due to the supply shortage earlier this year.

“The demand has shifted in terms of poultry production. I think hog production will face challenges until the end of the year,” Mr. Dy said.

PESSIMISTIC OUTLOOK
The Department of Agriculture (DA) recently downgraded its full-year growth target for the agriculture sector to 2%, lower than its previous goal of 2.5%.

Foundation for Economic Freedom (FEF) President Calixto V. Chikiamco said the 2% growth target will now be harder to reach as a result of the second-quarter figures.

“It was also negative in the first quarter. Then you have another lockdown disrupting demand and production in the third quarter. I think full-year agricultural growth will now be at 1% growth or even less,” Mr. Chikiamco said in a mobile phone message.