THE COUNTRY’S factory output continued to rebound in May as demand for manufactured goods grew amid the reopening of external markets coupled with low base effects.

Preliminary results of the Philippine Statistics Authority’s (PSA) latest Monthly Integrated Survey of Selected Industries showed factory output, as measured by the volume of production index, surged to 265% year on year in May. This was faster than the revised 155.6% annual increase recorded in April and a reversal of the 73.2% drop in May 2020.

The May result marked the second straight month of growth in manufacturing output following the 13 straight months of contraction. 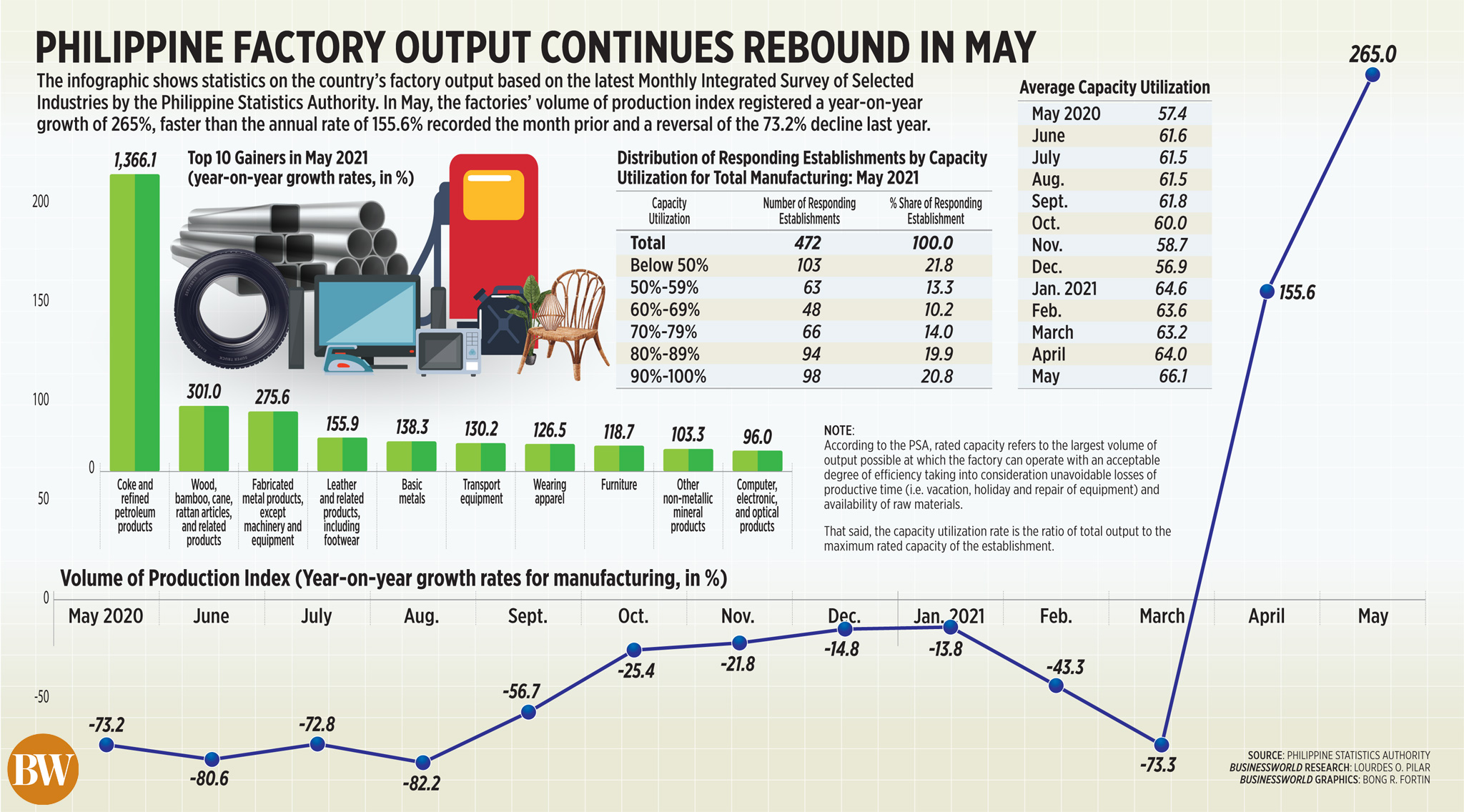 Eighteen out of 22 industry divisions posted year-on-year growth in May, nine of which were in triple digits. Leading the recovery was the manufacture of coke and refined petroleum products, which saw its volume of production grew by 14.7 times in May from the same month last year.

Capacity utilization — the extent to which industry resources are used in producing goods — averaged at 66.1% in May, up from the average of 64% recorded in the previous month.

Eighteen out of 22 industry divisions averaged a capacity use rate of at least 50% in May, led by the manufacture of furniture (83%), other non-metallic mineral products (79.6%), and machinery and equipment except electrical (74.2%).

“The faster triple-digit year-on-year growth in manufacturing volume of production magnified [the] further reopening of the economy… on top of the low base a year ago, Rizal Commercial Banking Corp. (RCBC) Chief Economist Michael L. Ricafort said in an e-mail.

Quarantine restrictions were eased starting May, as new daily coronavirus infections dropped from the peak in April.

Mr. Ricafort also noted the sharp growth in manufacturing was consistent with the recovery in exports and imports as more economies start to recover.

Latest PSA trade data showed an annual growth of 72.1% for exports and 140.9% for imports in April – the fastest recorded rates since at least 1991. Exports of manufactured goods grew by 88.1% and accounted for more than 80% of total export sales that month.

In a phone interview, Philippine Exporters Confederation, Inc. President Sergio R. Ortiz-Luis, Jr. ascribed the rebound to the reopening of markets abroad. He noted, in particular, the increased demand in manufactured goods in China due to “revenge spending” or the phenomenon characterized as a buying spree to make up for missed shopping during the COVID-19 pandemic.

Mr. Ortiz-Luis said that factory output should continuously improve barring accidents or the local transmission of new COVID-19 variants. Still, he cited risks to this outlook such as space and container shortages which cause freight rate surges and shipment delays and losses.

“Until now, the problem has not been solved and the situation may be worsening,” he said.

For RCBC’s Mr. Ricafort, the massive annual growth in manufacturing “could still continue” until around July to August due to base effects but would taper off thereafter around September “as the low base [effect] fizzles out and starts to rise sharply by then.”

Mr. Ricafort said other growth drivers in the coming months such as the further reopening of the economy amid increased vaccine rollouts, the increase in infrastructure spending, the reduced corporate tax rates brought by the Corporate Recovery and Tax Incentives for Enterprises (CREATE) law, the sustained low interest rates, and the increase in expenditures attributed to the May 2022 elections that would benefit manufacturing industries that are part of the supply chain.

“However, offsetting risk factors locally and globally are the more contagious coronavirus variants such as the Delta and Lambda variants that entail risks of further lockdowns and travel restrictions that could have adverse effects on manufacturing activities, going forward,” the economist added. — Nadine Mae A. Bo

Disasters, failure of governance are top risks to business

On the exodus of manufacturing and double dead agriculture

Police to monitor hoarding, profiteering in typhoon Ompong areas; death toll up to at...