PHILIPPINE gross domestic product (GDP) likely declined at a slower pace in the first three months of 2021 compared with the previous quarters, a BusinessWorld poll showed, as a renewed surge in coronavirus infections and a stricter lockdown imposed in Metro Manila and adjacent provinces dampened recovery.

If realized, this would be the slowest decline since the first quarter of last year when Luzon was placed under the strictest form of lockdown starting mid-March. 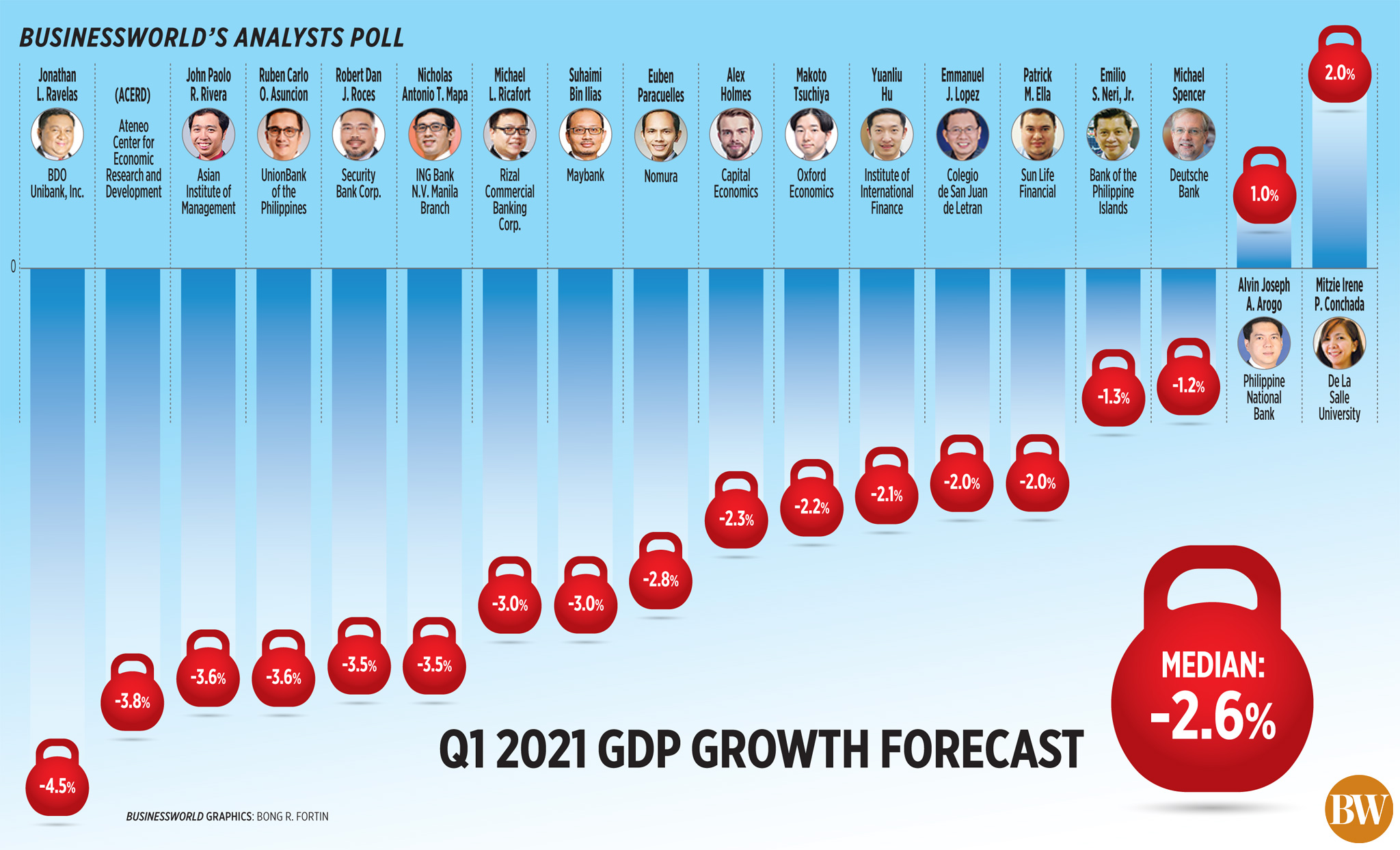 The poll’s first-quarter GDP forecast is way below the government’s 6.5%-7.5% target range. Economic managers are set to meet sometime this month to assess the impact of the renewed lockdowns on growth targets.

From March 29 to April 11, Metro Manila and the provinces of Bulacan, Cavite, Laguna, and Rizal were placed under enhanced community quarantine (ECQ). The areas are currently under the less restrictive modified ECQ (MECQ) until May 14.

The Philippine economy suffered its worst annual contraction in 2020 with 9.5%, according to the Philippine Statistics Authority (PSA) which began collecting data in 1947. The last three months of 2020 posted an 8.3% decline, improving from the revised -11.4% in the third quarter and the record -16.9% in the second quarter.

The first quarter of 2021 is expected to be the fifth consecutive quarter of GDP contraction. This would be the Philippines’ longest recession since the Marcos era when the economy shrank for nine straight quarters from 1982 to 1985.

While differing on the first-quarter economic performance, analysts agreed the recently imposed stricter lockdowns in the capital region had an impact on recovery.

“We initially expected a 0.5% growth for GDP [in the first quarter] before the recent implementation of new restrictions. Furthermore, we thought that there has not been a significant improvement in consumption, particularly household demand,” said UnionBank of the Philippines, Inc. Chief Economist Ruben Carlo O. Asuncion, who estimated a 3.6% decline in the first three months of the year.

“Non-discretionary consumption has been steady, with improvements in discretionary spending but not enough to pull the economy out of the red,” he added.

ING Bank N.V. Manila Senior Economist Nicholas Antonio T. Mapa penciled in a 3.5% contraction in the first quarter, noting household consumption is expected to “have been challenged at the start of the year” with consumer confidence remaining “deep in the red.”

“Labor market data recently released [last week] showed unemployment improved slightly by March but was for the most part still elevated compared to year-ago levels. High levels of both unemployment and underemployment translate to depressed consumption all the more compounded as inflation rose to 4.5% in the period,” Mr. Mapa said.

Preliminary results of the PSA’s March 2021 round of the labor force survey showed an unemployment rate of 7.1% during the month, the lowest since the 5.3% in January 2020 as well as the record-high 17.6% posted in April 2020. The underemployment rate — the proportion of those already working but still looking for more work or longer working hours, improved to 16.2% in March from 18.2% in February.

Separate PSA data showed headline inflation averaging 4.5%, slightly above the Bangko Sentral ng Pilipinas’ 2-4% target, as well as its inflation forecast of 4.2% for the year.

OUTLOOK
Economists, however, see diverging prospects for the second quarter and the rest of the year amid uncertainty over the COVID-19 pandemic.

Asian Institute of Management economist John Paolo R. Rivera said the ongoing lockdown and further delays of social amelioration “would have lingering effects in economic growth in succeeding quarters” and that economic recovery this year would depend on the pace of the mass vaccination program.

“However, I expect in the succeeding quarters that the steep decline we have experienced in 2020 will recover in 2021 albeit at a slower recovery trajectory before we eventually close the negative growth rates. Annual growth for 2021 is estimated at around 5% assuming vaccination towards herd immunity will not be disrupted so that quarantine restrictions can be relaxed,” said Mr. Rivera, who forecast a 3.6% decline in the first quarter.

Security Bank Corp. Chief Economist Robert Dan J. Roces, which estimated first-quarter GDP to have gone down by 3.5%, expects growth in the quarters ahead to “improve gradually and will be a function of improved business and consumer confidence,” likely from a wider vaccination rollout and higher infrastructure spending.

“The reimposed lockdowns… may complicate the overall growth picture, and the Philippines is likely to miss the 6.5-7.5% GDP growth target this year after lockdowns…,” Mr. Roces said.

Philippine National Bank Head of Research Alvin Joseph A. Arogo sees “meaningful downside risks” in the first half, but noted successful reduction of new daily COVID-19 cases in the coming weeks and acceleration in vaccination rollouts “could allow for better growth” in the second half.

“This should facilitate our full-year GDP growth forecast [of 5% year on year] to remain intact,” he said.

Inflation impact on the poor eases further in July — PSA