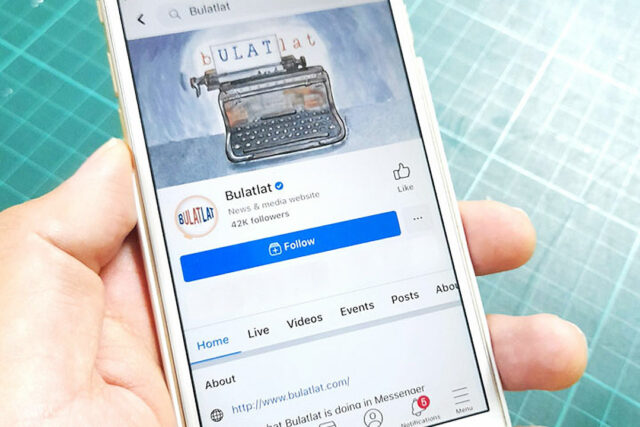 In a resolution, the court said the order blocking access to the website violated freedom of speech and of the press.

“There is a violation or curtailment of plaintiff’s right to free speech and of the press when its publisher’s and readers’ access to its website was limited,” Associate Justice Dolly Rose R. Bolante-Prado said in the order.

“The court’s resolution is a powerful yet beautiful defense of constitutionally guaranteed press freedom,” Bulatlat tweeted. In June, the regulator ordered local internet service providers to block 26 websites that allegedly support the Communist Party of the Philippines, New People’s Army and the National Democratic Front.

The order was issued upon the request of former National Security Adviser Hermogenes C. Esperon, Jr.

Bulatlat sued the NTC on July 8 and sought an injunction against the agency.

Meanwhile, the Commission of Human Rights (CHR) said it was consulting civic and grassroot groups on the United Nations’ (U.N.) mechanism to assess the human rights situation in the Philippines.

“The purpose of the universal periodic review is actually laudable,” she said. “It aims to replicate and identify the best practices on human rights dimensions in a particular country.“

“We have been in dialogue with our partner civil society organizations in the past two months that gave us very robust discussions,” she added.

Ms. De Guia said the measure also draws attention to human rights issues in the country. The agency would submit a report to the  United Nations Human Rights Council.

“This decision shows that inaction speaks louder than words,” he said.

“The camp of Leila de Lima and Leila de Lima herself were glad that finally this particular case has been junked and has been called for what it truly is,” he told CNN Philippines. “It is a scam, it is a sham, it is inconsistent, it does not have a leg to stand on.”

“We are still hoping, and the reason why Senator Leila de Lima is fighting is that we cling to hope that one day justice will prevail.”

He added that Ms. De Lima, who has been in jail since Feb. 2017 for drug trafficking, was disappointed that it had taken the Ombudsman five years to dismiss the charges based on “sham testimonies.”

The Ombudsman dismissed bribery charges against Ms. De Lima and her former aide Ronnie Dayan as it found no probable cause for their indictment.

At least four witnesses have taken back their allegations on the former senator’s involvement in the illegal drug trade.

In a statement on Thursday, the Justice department said the Ombudsman ruling was consistent with a 2017 DoJ resolution that did not consider Mr. Espinosa’s testimony in the absence of corroborating evidence.

The drug trafficking charges are different from the bribery charges, it added.

In 2016, Ms. De Lima led a Senate probe into vigilante-style killings in Davao when former President Rodrigo R. Duterte was mayor and vice mayor of the city.

She was arrested a year later following allegations of her involvement in the illegal drug trade.

Political and human rights experts have said the former lawmaker’s detention showed how the Philippine justice system could be easily abused.

Evacuation center in every city sought

Peso seen to strengthen on bets of policy easing