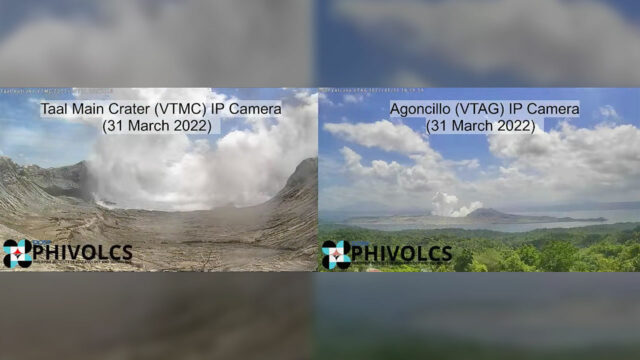 ANOTHER phreatomagmatic burst — or an eruption brought about by interaction between magma and water — was recorded at the Taal Volcano on Thursday following four similar events over the weekend, according to the state volcanology agency.

The Philippine Institute of Volcanoloy and Seismology (Phivolcs) said Thursday’s eruption took place at 10:39 a.m. at the volcano’s main crater.

In the 24-hour period from 5 a.m. Wednesday, there was no volcanic earthquake recorded but Taal continued to emit plumes of up to 1,500 meters high, based on Phivolcs’ bulletin.

Phivolcs Director Renato U. Solidum, Jr. said there is still no immediate possibility of an explosion on the scale of the Jan. 2020 eruption where emissions reached up to 16 kilometers high.

“There was a big difference between the Jan. 2020 eruption and the current eruption,” Mr. Solidum said in an interview with One News on Thursday.

“The possibility of having large explosions like the 2020 eruption is still there if magma at deeper levels… rise faster. But we do not see that possibility yet happening because the parameters that we record are not showing that sudden buildup of pressure,” he explained.

The Phivolcs head said Taal is still at a “deflated” state, “not inflated because the inflation will be seen when there’s large volume of magma going up the volcano.”

EVACUATION
More than 7,200 people have been affected since Saturday, including 4,165 evacuees, based on March 31 data from the national disaster management council.

It said P1.23 million worth of assistance has so far been provided to those displaced from 18 villages in Batangas province.

Taal, located about 100 kilometers south of the capital Manila, is one of the country’s most active volcanoes.

The presidential palace said on Wednesday that all agencies and local government units are ready with further response measures should the Taal warning be raised to alert level 4 from the current 3.

An alert level 3 means “magma is near or at the surface, and activity could lead to hazardous eruption in weeks,” according to Phivolcs’ warning system.

Each center can accommodate at least 110 families or 440 individuals, while about 106 modular tents can fit inside, DHSUD said in a statement on Thursday.

The centers’ facilities include an administrative office, storage room, kitchen and mess hall, children’s area, and clinic, among others.

The department also said there are 1,123 temporary shelters available for families if they choose to move from evacuation centers when Phivolcs declares an alert level 4.

These shelters are located in the towns of Ibaan and Talisay in Batangas, and Tiaong and Sariaya in the province of Quezon. — Marifi S. Jara and Kyle Aristophere T. Atienza