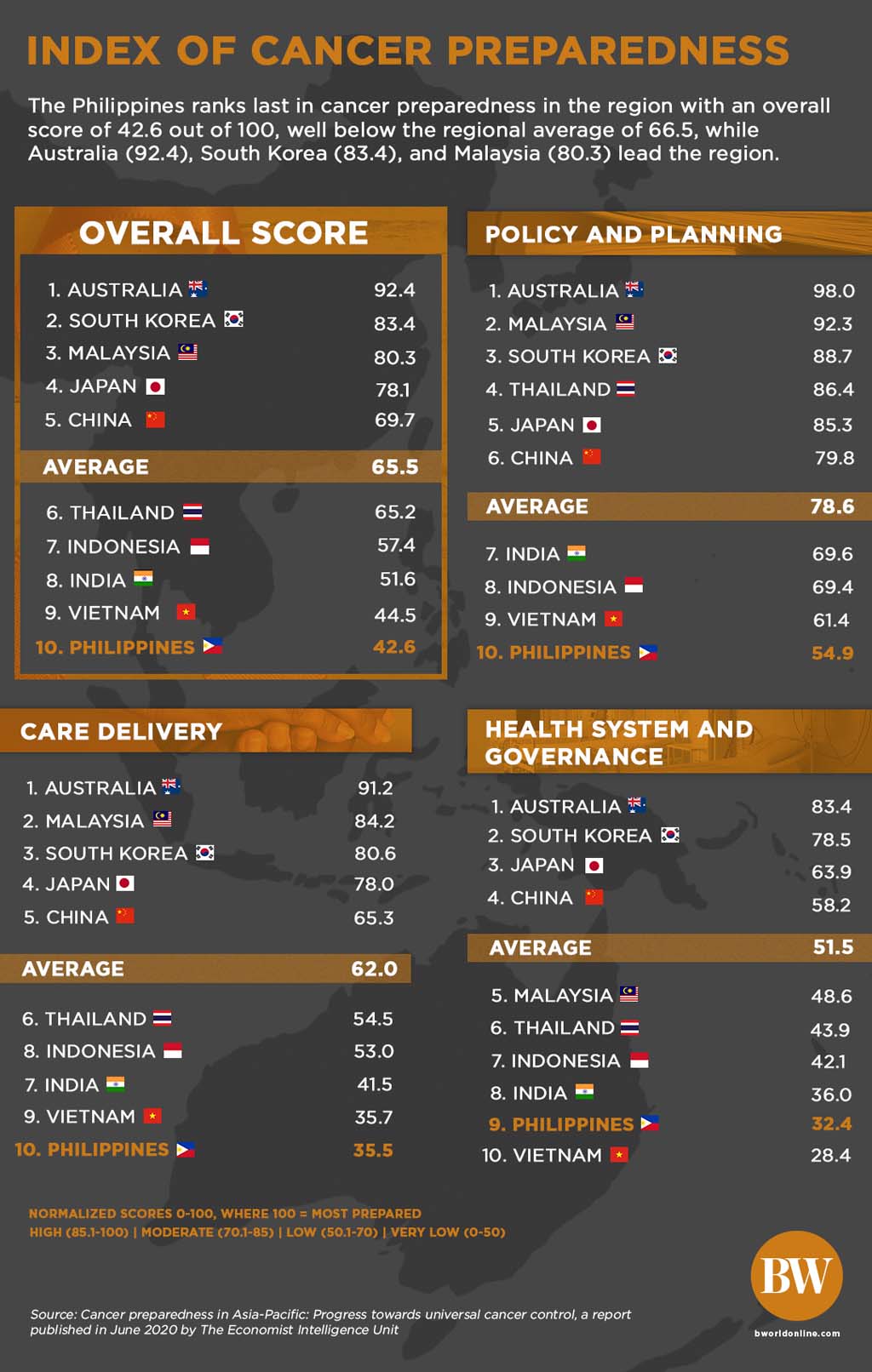 The Philippines ranks last in cancer preparedness in the region with an overall score of 42.6 out of 100, well below the regional average of 66.5, while Australia (92.4), South Korea (83.4), and Malaysia (80.3) lead the region. This is according to a report by the Economist Intelligence Unit (The EIU) that highlights the rising concern of excess cancer mortality for many Asian countries. Its Index of Cancer Preparedness, published this June, measured the readiness of healthcare systems in 10 countries, namely Australia, China, India, Indonesia, Japan, Malaysia, The Philippines, Thailand, South Korea, and Vietnam. The EIU the research and analysis division of The Economist Group, the sister company to The Economist newspaper.

TRANSLATION OF POLICY INTO DELIVERY
The cancer burden in Asia-Pacific is significant with an estimated 8.8 million new cases in 2018. “While there is clear progress at the planning level, the translation of policy into health service delivery and improved cancer outcomes requires more emphasis,” said Jesse Quigley Jones, editor of the report, during an online media briefing held yesterday, July 8.

The Philippines, for instance, has been recognized for its recent national cancer control act. The country was said to show “evolving commitment to cancer planning”—having had a previous action plan for 2015–2020—as it navigates the challenges of providing cancer care and universal health coverage. Further progress, however, was recommended as the country recorded below-average scores across Policy and Planning, Care Delivery, and Health System and Governance domains. This, in tandem with the country’s high prevalence of smoking, was cause for concern.

A strong correlation was also seen between the overall score in the said index and cancer control outcomes, demonstrating that better preparedness to manage the cancer burden equates with achieving better cancer outcomes.

Said Mr. Jones: “The Philippines was recognized as the only lower-middle-income country for a comprehensive national cancer control plan with its recent National Integrated Cancer Control Programme. Universal Health Coverage (UHC) programs in Southeast Asia such as the Philippines have shown remarkable progress towards increasing financial protection among the poor and previously uninsured population. However, the country still faces the challenge to improve coverage and the quality of their data. Like other lower-middle-income countries, the Philippines should focus its efforts in closing persistent access gaps and ensuring quality of services across the cancer continuum through better infrastructure and service supply while prioritizing effective policies on tobacco control and healthy lifestyle promotion.”

AN EMPHASIS ON PREVENTION
Cancer was the third-leading cause of death in the Philippines in 2017, with breast, lung, and colorectal cancers indicated as the types with the most incidence in the country according to 2018 data from the International Agency for Research on Cancer, an intergovernmental agency forming part of the WHO of the United Nations. Across Asia, as many as 70% of cancer cases in low- and middle-income countries in Asia are diagnosed at a late stage, hence the need to move from opportunistic to population-based screening and the emphasis on preventive services.

“How do we enact behavior change? That’s localized in each country and their norms,” said Dr. Saunthari Somasundaram, President and Medical Director of the National Cancer Society Malaysia, at the Index of Cancer Preparedness in Asia-Pacific media briefing. “There is a huge amount of late-stage diagnosis in Southeast Asia, with gaps in screening and detection. These (preventive and detection services) have to be accessible to a wide population.”

Apart from boosting prevention and early diagnosis, the priorities listed in the report for addressing cancer preparedness include laying the foundations for a cancer response; focusing on implementation and measuring results; closing gaps in cancer care; and system efficiency and prioritization.

The entire Cancer Preparedness in Asia-Pacific: Progress towards universal cancer control report can be perused here.

A strengthened fight against cancer