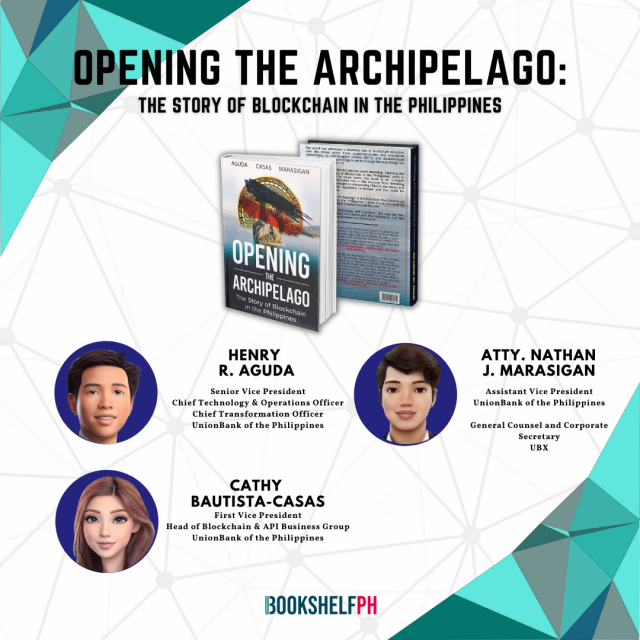 WITH digital transformation becoming imperative for institutions and businesses to thrive, three colleagues from the finance industry worked together to write a book on blockchain technology.

The idea of writing a book came over coffee.

“One day, we were having coffee and we struck a conversation on what would be good in terms of pushing adoption and awareness of an important topic,” co-author Henry R. Aguda, chief technology and operations officer of UnionBank of the Philippines, Inc., said during the online book launch on Nov. 11. “That small idea resulted in two years of work that we three collaborated on.”

With the goal of offering a deeper understanding of blockchain and its role in the future of the country, co-authors and work colleagues Mr. Aguda, Catherine Bautista-Casas, and Nathan J. Marasigan wrote Opening the Archipelago: The Sto-ry of Blockchain.

Published by Bookshelf PH, the book focuses on blockchain in the Philippine context and is divided into three parts which discuss the basic concepts of blockchain, a showcase of the different blockchain use cases and initiatives in the Philippines, and concludes with a discussion about the need for progressive regulation and how this can shape blockchain innovation and the future of this country.

A blockchain is a distributed database that stores information electronically in digital format. It is mostly known for its crucial role in maintaining a secure and decentralized record of transactions in cryptocurrency systems. It assures the fidelity and security of data records and allows digital information to be recorded and distributed, but not altered, deleted, or destroyed.

“I hope that this book may serve as a jumping-off point for a broader discussion of the role of blockchain technology in the Philippines. I invite other business leaders, entrepreneurs, community organizers, investors, media, and other stakeholders to join in, as it’ll take the entire business community to maximize its full potential to change Filipino society,” Mr. Aguda said in a statement.

A press release said the book is recommended for “anyone who wants to innovate with blockchain or partner with those already doing so in the space, including startup founders, corporate executives, government regulators, community organizers, institutional investors, and other like-minded leaders.”

“We try to document the most innovative and interesting use cases that could play a big role in changing or solving the important pain points in the Philippines,” Mr. Marasigan said at the online book launch.

Ms. Bautista-Casas, who has over two decades of experience in the banking and finance industry, said much like the use of Microsoft products today, “blockchain will be the necessity.”

“Everything in the future will be programmable,” she said.

Opening the Archipelago: The Story of Blockchain in the Philippines is priced at P1,000. For more information, visit https://bookshelf.com.ph/pages/opening-the-archipelago-1. — Michelle Anne P. Solima