What is strategic agility?

Strategic agility is “an organization’s ability to think ahead of the market, quickly mobilize itself, adapt to market shifts, fill capability gaps, capture new revenue ahead of the competition, and even create new markets.” (https://www.futurelab.net/blog/2017/09/strategic-agility)

Think of a country, region, or an industry.

Are there country lessons in ASEAN agribusiness? Indeed, there are.

MALAYSIA: from producer to processing hub. In the 1980s and early ’90s, Malaysia was producing a large volume of cacao beans from large plantations in Sabah, east Malaysia. It put up grinding plants to convert beans to butter and paste (both raw materials for chocolates). In Sabah, some 400,000 hectares (has) were converted to oil palm, principally due to labor constraints.

THAILAND: Commodity grade rice to jasmine rice. Thailand is one of the leading rice exporters, along with India and Vietnam. The threat on commodity grade suppliers led Thailand to diversify it product mix.

In 2018, 70% of its rice exports were commodity-grade and the rest was jasmine hom mali (Thai fragrant rice).

Philippines. Drive for Cavendish banana. In 1965, Japan’s banana needs were mainly supplied by Taiwan and none came from the Philippines. When trade was liberalized in the 1970s, bananas were one of the first agri products to be imported in large amounts, initially from Taiwan and Ecuador. The strategic position of multinationals brought investments to Mindanao. By 1975, the Philippines had supplanted Taiwan as its Asian supplier while Latin American countries, e.g. Ecuador, also expanded exports. (See Table) 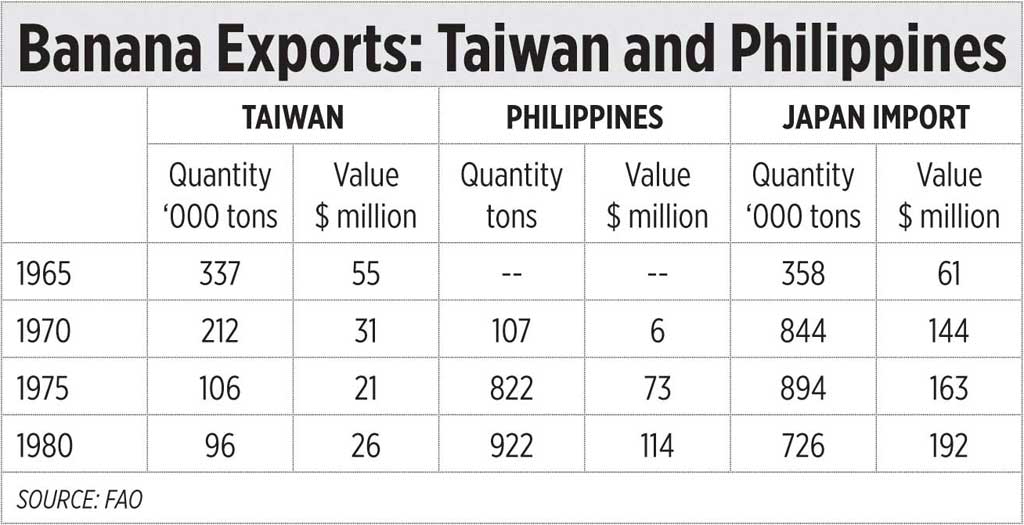 FUTURE DISRUPTORS
• Vietnam shifts rice land to coconuts. The latest news emanating from Vietnam is that it is converting some 500,000 has of rice lands to aromatic coconut for export. Competition in the rice market by India, Cambodia, and Myanmar as well as climate change (the sea level rise in the Mekong delta) were crucial to the decision.

The Vietnamese Minister of Agriculture and Rural Development recently announced plans to reduce the 4.1 million has of farm area for rice production by 0.5 million has. Unpredictable weather conditions, capricious tariff policies, and a turbulent global market make rice a risky product to rely heavily on.

Authorities have recommended switching to other crops, such as coconuts. Coconut trees’ ability to cope with saltwater makes them more appealing in light of the effects of climate change, and the global market for them is positive. Rice bran oil, a more lucrative commodity, has also been proposed. (https://saigoneer.com/vietnam-news/17756).

In 2018, the total export value of coconut reached $560 million: Thailand, $124 million; Indonesia, $121 million; and Vietnam $109 million. The Philippines, with the large land area devoted to coconut, is not in the picture.

• Davao, Mindanao’s cacao country, made the strategic decision to shy away from beans production in favor of becoming a single-origin chocolate producer. The bean-to-bar strategy has been led by innovators such as Charita Puestespina, who has won awards for Malagos chocolates. Malagos won seven awards at the prestigious 2019 International Chocolate Awards — Asia Pacific, bringing its total number of accolades to 44 through the years. This includes being named among the “Best 50 Beans in the World” at the 2017 Cocoa Excellence Program, and 16th best in the world in 2019’s Heirloom Designation. (https://malagoschocolate.com/2019-international-chocolate-awards-asia-pacific/)

Then there is a new entrant, Filipinas Oro de Cacao Inc., which is behind the single origin, bean-to-bar Auro brand. It sources its beans from farmers in the Paquibato district, Davao City. The Philippine brand won the British Academy of Chocolate Award in 2018. (https://aurochocolate.com/pages/about)

The strategic move towards value-added chocolates with a geographic brand is a wise move. The Philippines need innovators to bring higher farm productivity and product diversification to energize the countryside, and increase job creation and exports.

Rolando T. Dy is the Co-Vice Chair of the MAP AgriBusiness Committee, and the Executive Director of the Center for Food and AgriBusiness of the University of Asia & the Pacific.