FOR the past two games, Fran Yu has been manning Letran’s ship with aplomb.

But with two of the Knights’ vital cogs out due to suspension, Mr. Yu would have to steer the wheel one more time.

Mr. Yu would have to step up even more as a Letran team minus starters Brent Paraiso and Louie Sangalang tackles age-old bitter rival San Beda today in the NCAA Season 98 at the Filoil EcoOil Centre. 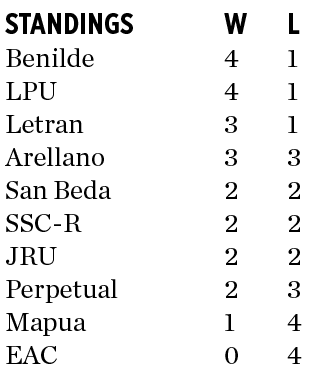 The scrappy skipper had a Herculean effort in their last two games, unleashing 15 points, five assists, four rebounds and three steals in a bruising 67-62 win over the Mapua Cardinals Tuesday and 12 points, nine boards, five dimes and six swipes in an 81-75 win over the College of St. Benilde Blazers a week ago.

A win for the three-peat-seeking Dominican school would catapult it back to the top alongside idle CSB and Lyceum of the Philippines University on identical 4-1 records.

For San Beda, which is currently in a logjam at No. 5 with San Sebastian and University of Perpetual Help on 2-2 slates, it would barge into the magic four with a win in their 3 p.m. showdown.

It might help the San Beda Lions a bit that the sharp-shooting Mr. Paraiso and the energetic, bulldozing Mr. Sangalang would serve their one-game suspension slapped by league commissioner Tonichi Pujante for their unsportsmanlike play last game.

Mr. Paraiso got the boot after he hit Mapua’s Adrian Nocum dangerously on the nape that resulted to a disqualifying foul while Mr. Sangalang was ejected due to two technical fouls for taunting.

Now it will be up to Mr. Yu to take charge again.

NBA might allow players to opt out of season’s restart

ALI: No plans to develop project in Sagada