DEMAR DeRozan knocked down a game-winning, buzzer-beating 3-pointer for the second time in as many nights to cap the Chicago Bulls’ come-from-behind, 120-119 defeat of the host Washington Wizards on Saturday.

Coby White triggered a sideline inbounds pass to DeRozan with 3.3 seconds remaining. After getting the defender to leave his feet with a pump fake in the corner, DeRozan fired a double-clutching 3-pointer that went in.

DeRozan capped the Bulls’ win Friday at Indiana with a running 3-pointer at the buzzer. He is the first player in NBA history to hit game-winning buzzer-beaters in back-to-back days. 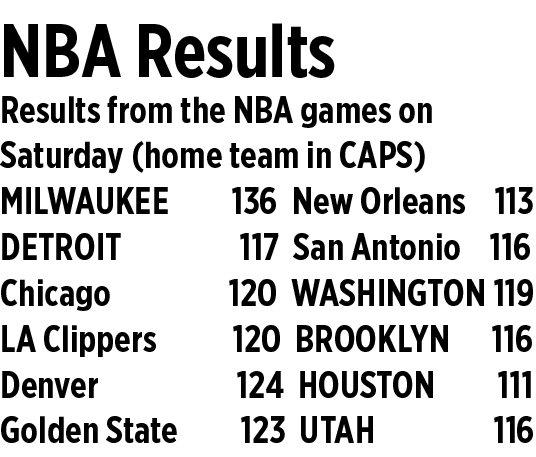 DeRozan was one of four Bulls to score at least 20 points, going for 28. Nikola Vučević recorded a double-double with 22 points and 12 rebounds, White shot four-of-eight from 3-point range en route to 20 points and Zach LaVine led all scorers with 35 points.

LaVine scored 15 of his points in the first quarter and hit four-of-five from 3-point range in the period to help keep the Bulls close. He finished seven-of-12 from deep, pacing Chicago to a blistering 17-of-34 from beyond the arc.

The Bulls’ 3-point shooting countered a 72-30 advantage in points in the paint for the Wizards.

Washington surged ahead in the opening period and led for most of the way, extending its lead to as many as 13 points. Kyle Kuzma led the Wizards with a season-high 29 points, the last of which came on a 3-pointer with four seconds remaining.

Kuzma’s basket gave Washington a 119-117 lead after DeRozan had made a pair of free throws with 49.2 seconds left to give Chicago a lead. Kuzma missed on the subsequent possession but grabbed the last of his game-high-matching 12 rebounds.

Saturday was Kuzma’s third straight game scoring at least 20 points, the first time he has done that since December 2018.

Bradley Beal added 27 points and dished a career-high 17 assists in the loss. Daniel Gafford went 9-of-10 from the floor for 19 points, and Kentavious Caldwell-Pope notched 13 points. — Reuters

Celebrating life in a time of the nCov virus