Properties have often been classified from low-rise to high-rise and from economic to luxury. Another way of classifying is whether they are horizontal or vertical developments, which have also defined the way of living of residents.

Horizontal is often associated with individual spaces like houses and apartments sprawled outside metropolitan areas, while vertical often refers to condominiums and shared spaces that usually fill urban spots.

Such descriptions have been reflected in the recent “Hotspots Unwrapped” reports of online real estate marketplace Lamudi. Back in 2020, the figures — based on the website’s pageviews — show that demand for houses was higher than that of condominiums and even apartments.

With houses earning the most number of pageviews and leads in provincial cities, Lamudi hinted that “the market has gained greater appreciation for living spaces that offer bigger rooms, which will accommodate work-from-home and distance learning arrangements, or outdoor areas that provide safe recreational opportunities.”

In the metro, meanwhile, houses and condos remain the most popular choices. “In Quezon City, units in horizontal developments represent 29.25% of the leads. In Makati, condos dominate with 34.90% of the leads,” Lamudi’s report further detailed.

A more recent edition of its “Hotspots Unwrapped,” which listed the cities around the country to watch this year, observed a sustained trend in demand for horizontal developments.

“Residential properties such as houses flexed a large share of leads out of all property types, a trend common to most of the aforementioned cities. This is consistent with 2020 trends, which saw an increase in demand for horizontal developments,” the report stressed.

Among the cities, San Juan City was recognized for its “blend of both horizontal and vertical residential developments as well as its varied retail offerings,” which Lamudi noted “have made the city an attractive residential destination for families.” Lamudi also observed that in Pasay City, new vertical developments such as condominiums and office towers are continuing to crop up. “The city continues to be an attractive investment destination especially for employees of firms and government offices in the area as well as those who frequently fly for work,” the report read.

Recently, however, the concepts of horizontal and vertical development have apparently evolved as the perks and advantages of both types have been bundled into new offerings.

“Horizontal multifamily lets renters have the best of both worlds: an apartment where maintenance is taken care of as well as privacy and potentially a backyard,” real estate writer Deidre Woollard wrote in The Motley Fool-owned Millionacres website.

There has also been an emerging preference for “horizontal condominiums.” This type of condominium, according to Architect John Ian Lee Fulgar in an online article, brings the lifestyles that mark high-rise condominiums into typical Filipino houses similar to regular house-and-lots, rowhouses, or even townhouses. In terms of location, this type is often found near beaches or vacation spots. Kasa Luntian in Tagaytay City and Vista de Loro in Batangas are cited as examples of horizontal condominiums.

The concept of “vertical village” has also been on arising, as shown in the launch of a Camella Manors project in Davao. As BusinessWorld reported last year, Camella Manors Operations Head Marlon B. Escalicas said the development is positioned as “vertical villages” as “as these combine the conveniences of condominium living within a community in a prime location with commercial establishments, public transport access, and medical facilities, among others.”

From ‘pancakes’ to ‘pyramids’

No matter how horizontal and vertical developments have evolved, both are seen to be taking the shape of cities in the future.

A World Bank (WB) report published last year, based on satellite data analysis for almost 10,000 cities, analyzed the link between a city’s economic growth and the floor space available to residents and businesses. 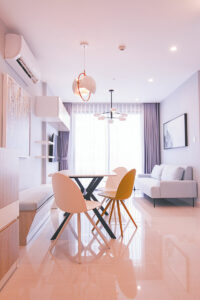 “It finds that a city is most likely to be its best version when its shape is driven by economic fundamentals and a conducive policy environment — namely, a robust job market, flexible building regulations, dependable public transit and access to essential services, public spaces, and cultural amenities,” WB said in a statement.

The report noted three margins along which cities are projected to grow, depending on the aforementioned fundamentals. These three are horizontal spread, where cities extend beyond their previously built-up area; vertical layering, where cities raise the skyline of the existing built-up area; and infill development, where cities close gaps between existing structures.

Low-income cities tend to spread horizontally, looking like what the report termed as “pancakes,” as newcomers crowd into low-built quarters or settle on the outskirts where land is cheaper. Cities with higher incomes and productivity, meanwhile, are found to be taking the shape of “pyramids,” as they experience horizontal spread, infill development, and vertical layering altogether.

“A rising demand for floor space in economically productive cities… combined with a related rise in housing investment and consumption, leads developers to fill vacant or underused land at and within the city edge with new structures,” the report explained. “These pockets of close-in land become dense with office and residential space… Structures are built taller on average, and at the urban core, they are built much taller, forming sharply peaked skylines.” — Adrian Paul B. Conoza

A quest for reaching bigger targets

The ups and downs of the global energy transition journey

Fostering unity in a time of great challenge

A quest for reaching bigger targets