MANUFACTURING ACTIVITY sharply declined to a 15-month low in August as a fresh surge in coronavirus disease 2019 (COVID-19) infections led to another strict lockdown in the Philippine capital.

IHS Markit on Wednesday said the Philippines Manufacturing Purchasing Managers’ Index (PMI) fell to 46.4 last month from 50.4 in July, as factories and businesses were forced to close due to a two-week enhanced community quarantine in Metro Manila.

August saw factory activity ending two straight months of expansion and falling to its lowest level in 15 months or since the 40.1 reading in May 2020. 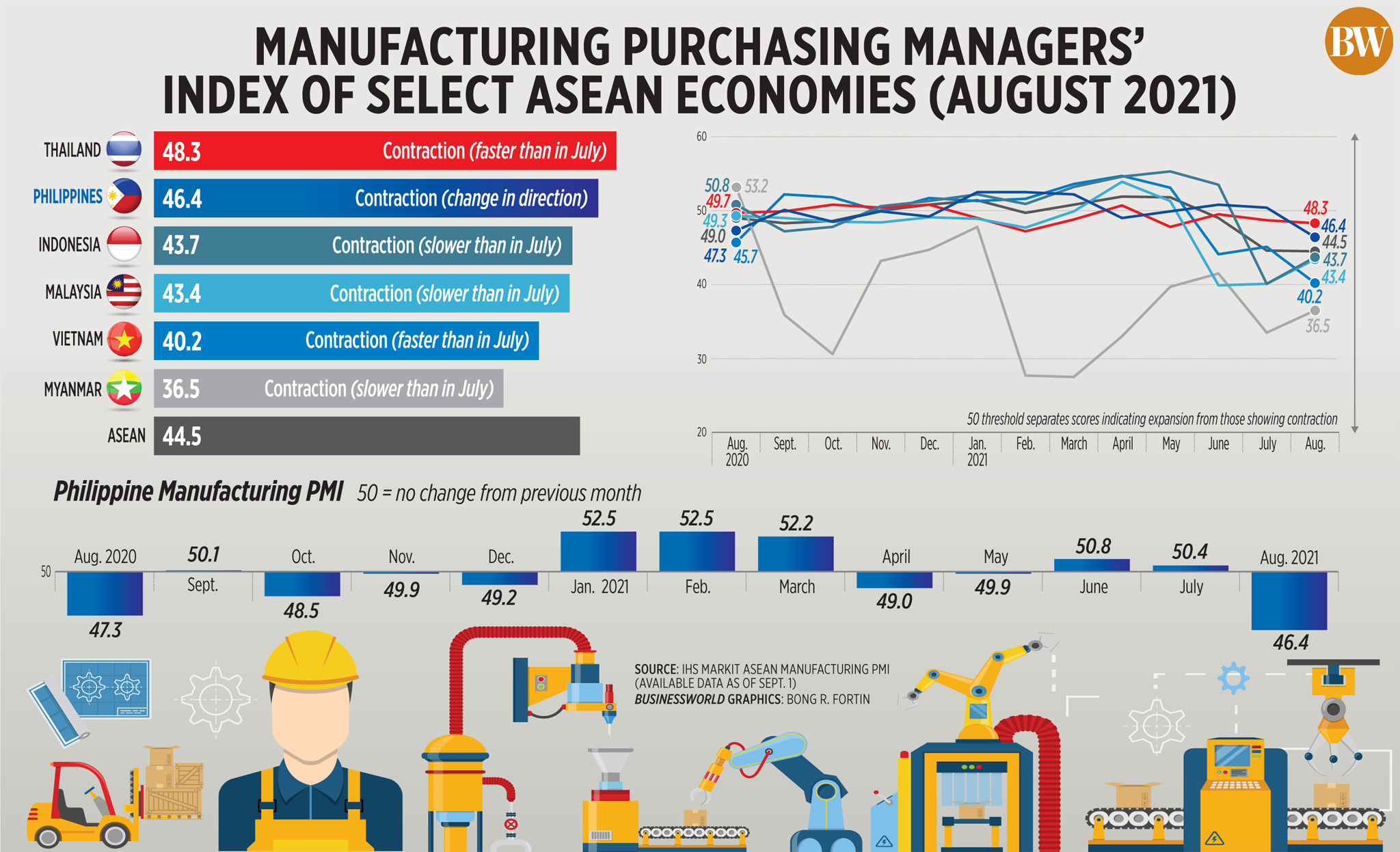 A reading above 50 indicates improving conditions for the sector versus the previous month, and below the threshold means deterioration.

“With the announcement of tightening ECQ measures in early August, the latest contraction in operating conditions in the Philippines manufacturing sector came as no surprise. Factories and their clients in the Metro Manila area once again paused their production lines in a bid to curb the spread of the new Delta variant,” Shreeya Patel, economist at IHS Markit, said in a statement.

Like the Philippines, the rest of Southeast Asia saw manufacturing conditions worsen in August due to a resurgence in COVID-19 cases and subsequent lockdowns. The regional average reading slipped to 44.5 in August from 44.6 the month earlier, marking the third straight month of deterioration.

IHS Markit noted that all five of the PMI components worsened for the Philippines in August.

Production by local factories fell for the fifth month in a row in August, which was also the fourth steepest decline in the series history.

Customer demand likewise declined by the fourth quickest rate in the series history, as domestic sales slumped due to the closure of businesses and exports fell by the fastest pace since July 2020.

“Tighter restrictions on travel and the closure of businesses led clients to curb orders. Weak domestic sales were accompanied by a renewed contraction in foreign demand,” IHS Markit said.

Due to lower production, manufacturers bought less as they tried to restructure existing stocks and recover costs.

“Delivery times lengthened at the most marked rate since August 2020 and was among the lengthiest in the over five-and-a-half-year history of the survey,” IHS Markit said.

As factories temporarily shuttered operations, more workers either resigned or were laid off.

IHS Markit, however, noted price increases have slowed to its softest pace in seven months.

However, manufacturers still raised their selling prices to pass on these higher costs to customers.

“On a brighter note, firms’ expectations towards the outlook remained optimistic owing to hopes that the latest downturn is only temporary,” Ms. Patel said.

Companies are also hopeful that the vaccine rollout will help the country’s “return to normality,” although many are still worried about uncertainty over the pandemic.

“Risk factors include the new coronavirus strains, especially the Delta variant, that are more contagious. [This] could slow down economic recovery prospects amid risks of lockdowns and travel restrictions locally and worldwide… [and lead] to slower recovery in manufacturing and imports,” he said.

Lockdown measures in Metro Manila and other provinces are under the second-most stringent lockdown until Sept. 7.

Meanwhile, Mr. Roces said a fast turnaround from the August slump is possible given the easing price pressures and firms’ expectations that the PMI contraction will only be temporary.

“The biggest nudge will be a quickening of the vaccination pace and easing lockdowns,” he added. — B.M.Laforga