Home Opinion Tobacco taxes and smuggling in the Philippines

Keeping taxes of tobacco products high and raising them is a favorite policy measure of governments, health NGOs, and other sectors. The twin goals are: a.) to reduce smoking incidence by making cigarette prices higher, and, b.) raise revenues for government’s universal healthcare (UHC) program.

TOBACCO TAX RATES UNDER FOUR LAWS
Even two decades ago tobacco tax rates were already high. Under Republic Act (RA) 9334 of 2004, cigarettes with retail prices of P6.50 to P10/pack were taxed at P11-P12/pack.

I checked cigarette prices in a 7-Eleven store today: the cheapest brand is P100/pack, the most expensive is P145/pack. Since the tax is P50/pack, then the NRP of these products are perhaps only P30 to P75/pack. Government earns more than the tobacco companies and retailers.

TOBACCO SMUGGLING REPORTS
The Property Rights Alliance (PRA, Washington DC), an old free market ally of Minimal Government Thinkers, granted me a modest funding to make a study on tobacco taxes and smuggling in the Philippines and it is due this week. The paper will have a 40-page Annex, newspaper reports about illicit cigarettes over the past four years. Table 2 is a summary of those reports and only reported combined values of P300 million and above were included here. 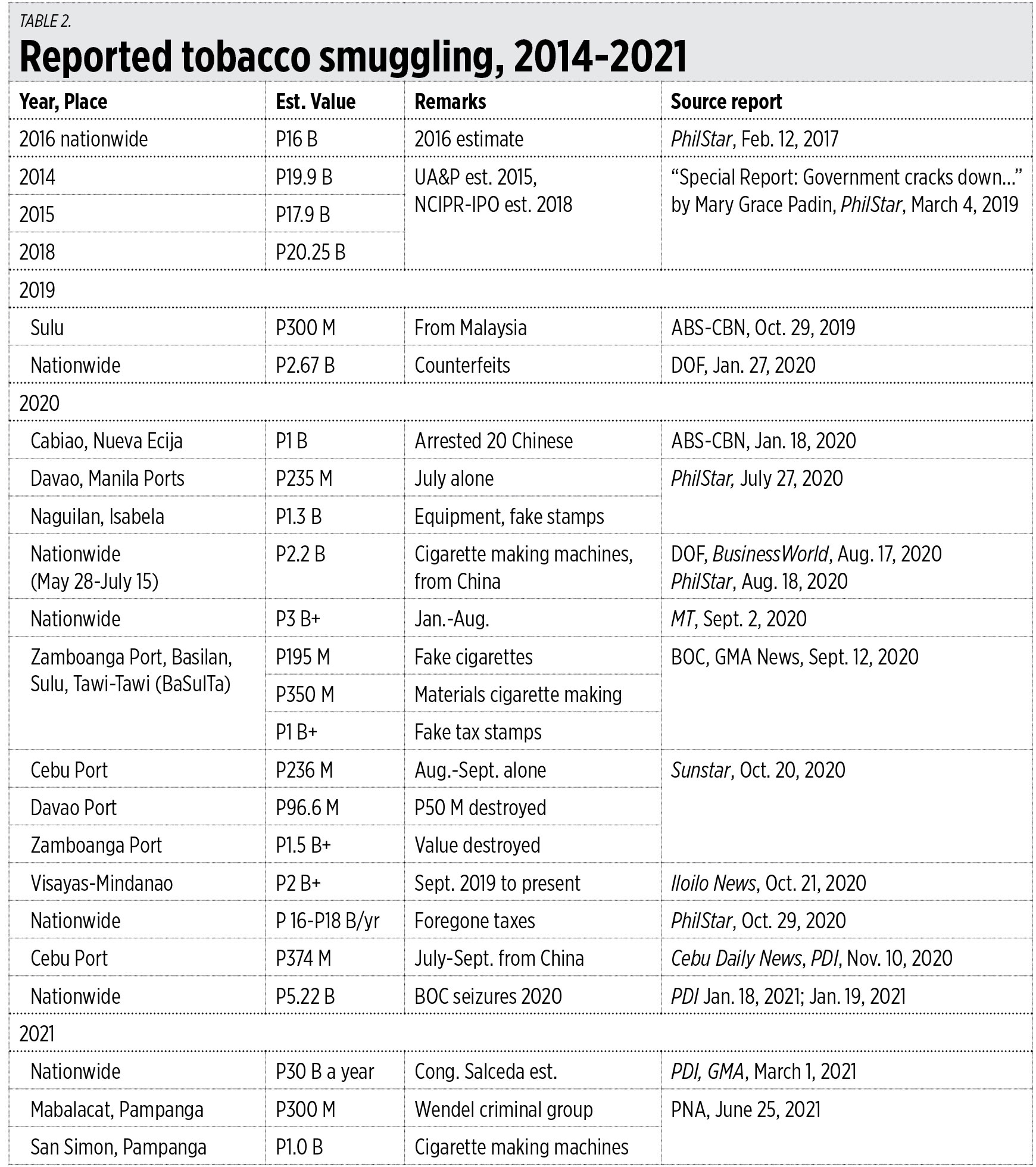 The World Bank has estimated that global trade in illegal tobacco is already worth $40 billion to $50 billion a year.

LESSONS, CONCLUSIONS
The higher the taxes, the higher the tendency for criminal groups to go into tobacco smuggling and smokers are attracted to cheaper, untaxed illegal cigarettes. Laws that over-tax, even prohibit, legal tobacco will encourage and generate illegal tobacco.

In this situation, the losers are: a.) government finance department or ministry with lower than potential revenues, b.) legal tobacco companies with lower revenues, and, c.) consumers who are tempted to patronize cheaper but illegal cigarettes.

The winners are: a.) corrupt government officials who allow and protect smuggling in exchange for high monetary rewards, and, b.) criminal gangs and terrorist groups engaged in this and related activities. And overall corruption in government increases, not decreases.

If Congressman Joey Salceda’s estimate of P30 billion/year in illegal tobacco in the country is correct, then the reported estimate of P16 billion to P20 billion/year in foregone taxes is also correct. That is equivalent to the full year budget of the Departments of Trade or Foreign Affairs in 2020.

So, instead of introducing another round of tobacco taxes, Congress and the Executive should focus on strictly implementing the existing tax laws and plugging loopholes, like controlling the proliferation of smuggled illicit products. This will achieve three goals: a.) increasing government revenues, b.) decreasing corruption in government, and, c.) depriving funding for criminals and terrorist groups.

FDA RECEIVING FUNDING FROM PRIVATE LOBBY GROUPS
On a related note, the Food and Drugs Administration (FDA) has been warned by the House Committee on Good Government and Public Accountability for receiving money and perks from a US anti-tobacco group to draft policies regulating vaping in the country.

In earlier Committee hearings, an FDA official initially denied the agency’s receipt of foreign private money to fund the development of regulations for vapes and heated tobacco products (HTPs). The agency eventually admitted to have solicited and received a grant from The Union, an anti-tobacco organization financed by the Bloomberg Initiative.

The Committee has adopted House Resolution 1396 that directed Congress to conduct an investigation on the FDA’s questionable acceptance of money from Bloomberg and donations from private local and international sources. See “House calls for tighter measures against foreign interference in local policy making” (Manila Bulletin, Aug. 22) and “FDA admits getting over $150,000 from anti-tobacco NGO to regulate vapes” (Manila Standard, March 17).