Among the big surprises this year has been the huge spike in global prices of fossil fuels as the favored renewables wind and solar continue to produce intermittent, unstable, even declining output.

These news headlines last week look like the papers are describing some Third World countries and not UK and Europe: “British Steel warns of up to 50-fold increase in power prices” (Financial Times, Sept. 21), “Energy price rises: Dozens of firms will be left to collapse” (The Times, Sept. 21), “‘Absolutely no question of lights going out’ this winter over hike in energy prices, cabinet minister says” (The Independent, Sept. 21), “Europe’s energy crisis: A switch back to coal is on the cards” (The National, Sept. 24), “Starved of Gas, European Electricity Producers Snap Up Coal” (Bloomberg, Sept. 25).

HUGE SPIKE IN FOSSIL FUEL ENERGY PRICES
I checked commodity prices as of the end of last week, Sept. 24. Aside from lithium — used mainly for batteries in cell phones, laptops, and electric vehicles — and soda ash, the fossil fuels coal, natural gas, and propane have had very high rises in prices year to date (YTD) or from Jan. 1 to Sept. 24.

For a price index, despite the huge spike in EU’s carbon permits that are supposed to favor wind and solar energy and penalize fossil fuel energy, wind and solar are not attractive as they suffered price contractions (see Table 1). 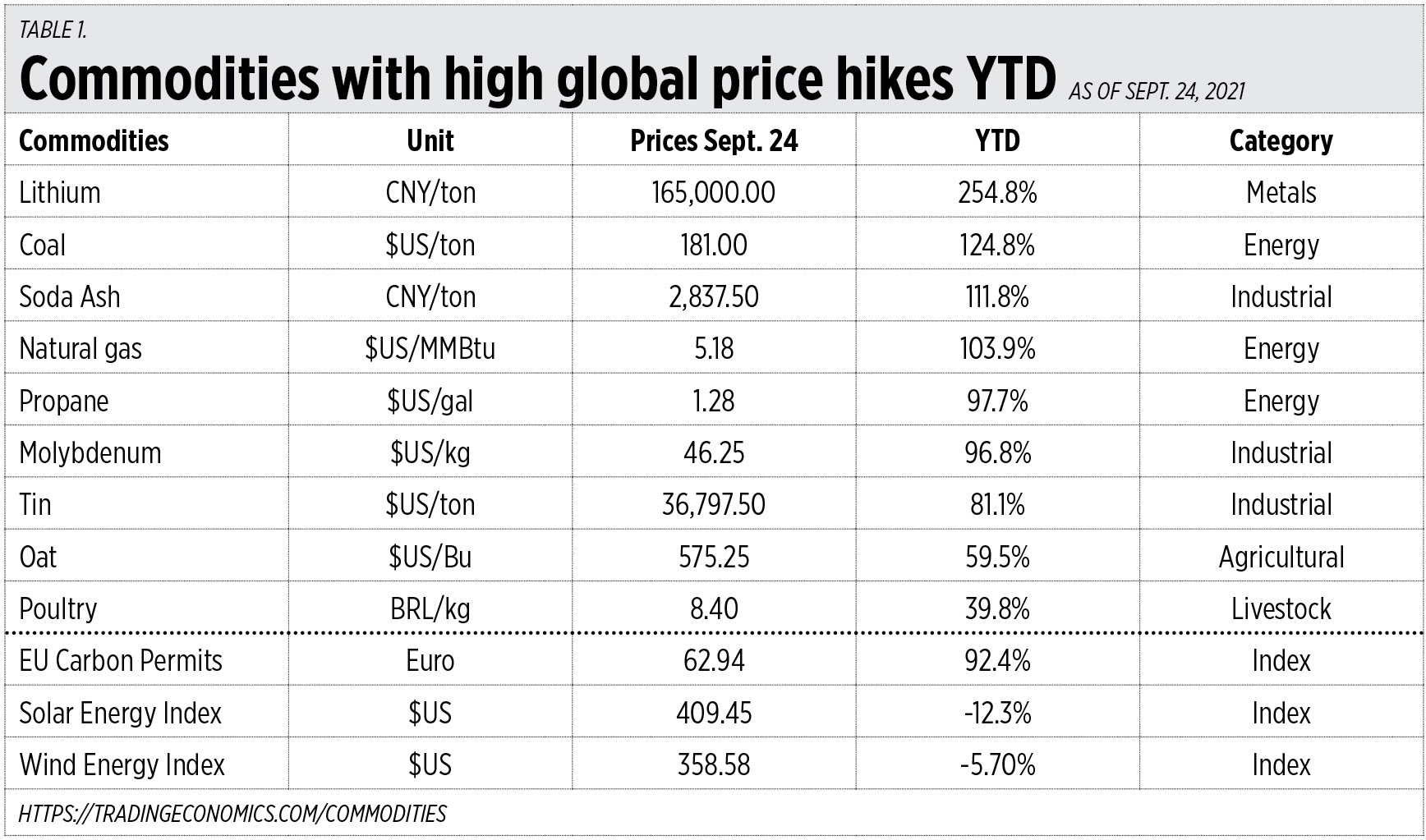 I made my own projection for Q3 this year based on electricity demand which is sensitive or responsive to government lockdown policies. I included data on electricity prices like the customers’ Effective Spot Settlement Price (ESSP) and producers’ Load Weighted Average Price (LWAP).

From the Independent Electricity Market Operator of the Philippines (IEMOP) data, power demand grew 6.6% in the first half of 2021, GDP growth over the same period was 7.9%, again due to very low base in Q2 last year. Power demand growth in Q3 decelerated to only 1% because of ECQ-MECQ in August and the equivalent “level 4” restrictions in September. The Philippine Statistics Authority (PSA) will officially release GDP figures for Q3 2021 in the first week of November, but from initial power data and also low base in Q3 2020, my estimate is 4%-5% growth in the next quarter. 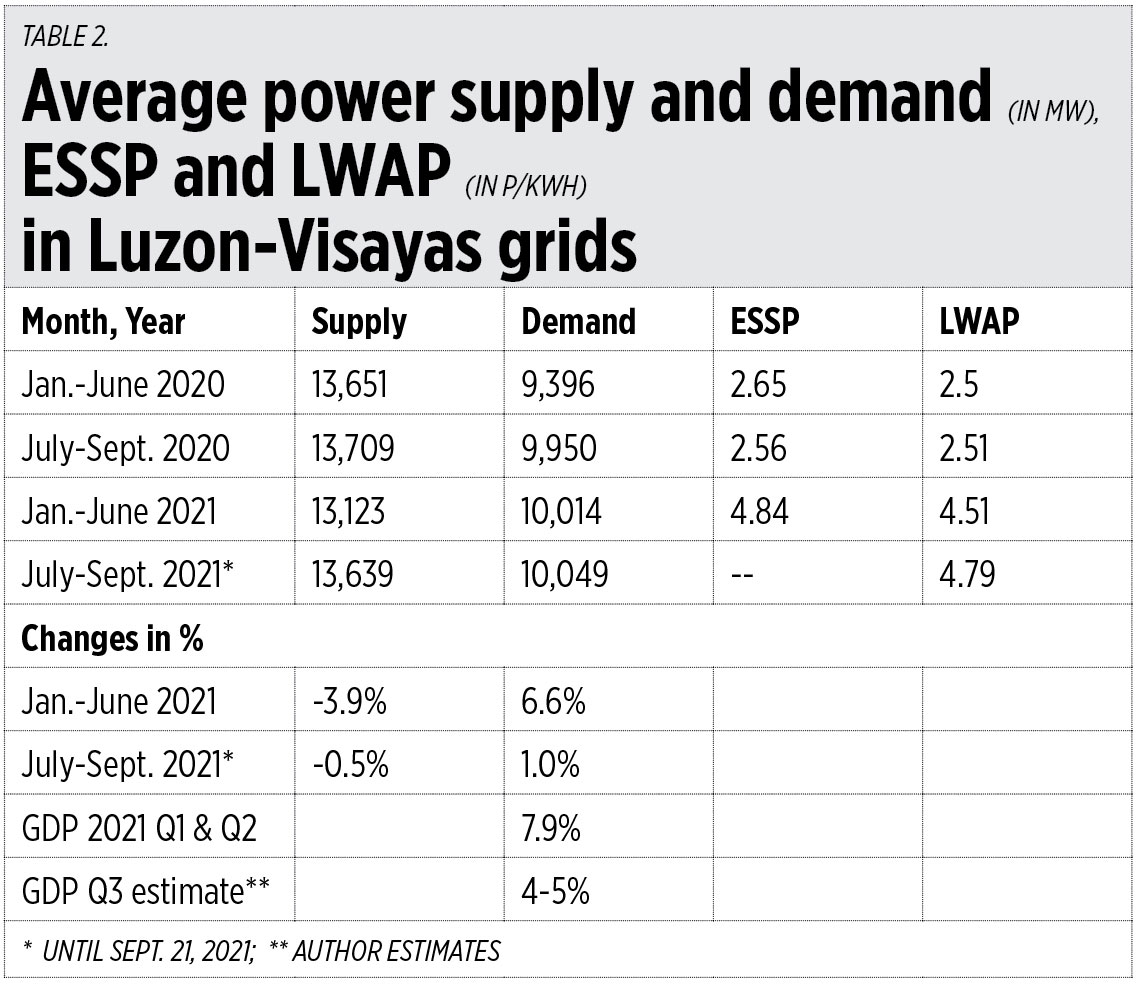 Decentralized distribution utilities (DUs) and electric cooperatives which have been technically demonopolized via retail competition and open access (RCOA) provision of the EPIRA law are penalized by the Energy Regulatory Commission (ERC).

Decentralized, demonopolized and competitive power generation sector is also penalized by the ERC.

The national monopoly, zero competition National Grid Corp. of the Philippines (NGCP), with many delays and unfinished work in transmission nationwide, is not penalized and is even shielded by the ERC.

Cute investigator ERC, that regularly harasses decentralized power generation and distribution sectors, should be investigated by Congress for its consistent shielding of the only remaining national monopoly in the country, the NGCP.

HYDRO POWER RECOVERY
The share of hydro power (big and run-of-river) to total power generation this year in the Luzon-Visayas grids has been rising due to the rainy season. From only 3.3% of the total last May, it went up to 4.4% in July and 7.7% in August.

The current double-dip La Niña that started around September 2020 is projected to continue until about April 2022, said US NCEP-CPC-NOAA projections as of Sept. 25. See also “La Niña: Globe Expected to Continue Cooling into Next Year, Extending Cooling Streak To 7 Years” (No Tricks Zone, Sept. 24, 2021).

Last weekend, my family visited Villa Escudero in Tiaong, Quezon. Its small dam or weir created a lake upstream for bamboo rafting/tourism and fishery, and a 70-kw hydroelectric plant. The weir was built in 1872 for irrigation. Fast forward today, it achieves four useful socio-economic goals with that single project — power generation, tourism, irrigation, and fishery.

The Departments of Energy and Tourism should jointly promote nationwide small but many dams or weirs of the Villa Escudero style. Our problem in the tropics is not lack of water but too much water, too much flooding during the rainy season. That excess water should be stored in many impounding lakes and rivers and, in the process, create more indigenous power generation, irrigation, eco-tourism, and fishery.

‘Let There Be Light’

The freedom to fly