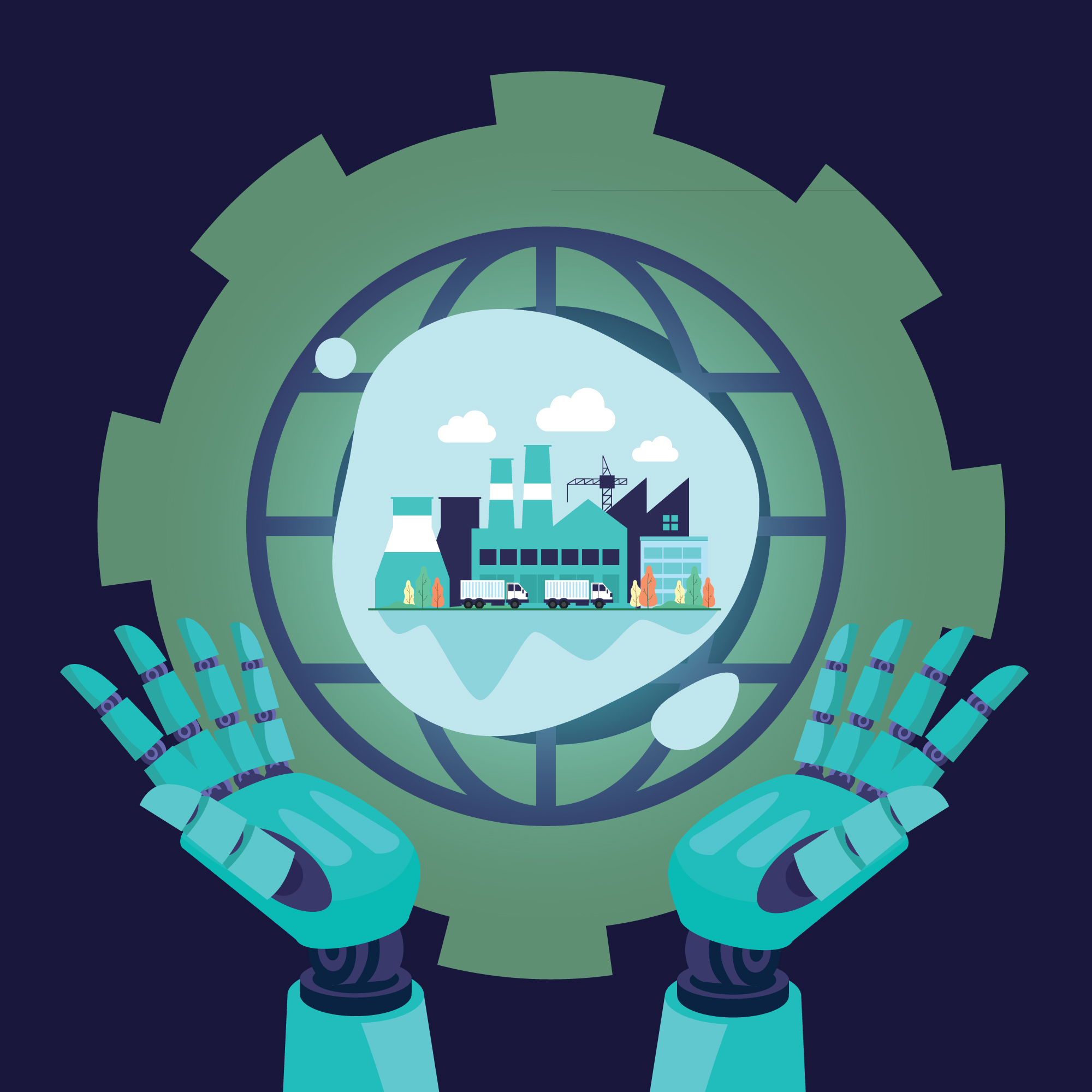 There is much talk, especially in the international press, of the so-called Fourth Industrial Revolution. Wikipedia defines the Fourth Industrial Revolution (or Industry 4.0) as the ongoing automation of traditional manufacturing and industrial practices, using modern smart technology. Large-scale machine-to-machine  communication (M2M) and the Internet of Things (IoT) are integrated for increased automation, improved communication and self-monitoring, and production of smart machines that can analyze and diagnose issues without the need for human intervention. The phrase was first introduced by a team of scientists developing a high-tech strategy for the German government. In a 2015 article published by Foreign Affairs, Klaus Schwab, executive chairman of the World Economic Forum (WEF), introduced the phrase to a wider audience. In essence, the Fourth Industrial Revolution is the trend towards automation and data exchange in manufacturing technologies and processes which include cyber-physical systems (CPS), IoT, industrial internet of things, cloud computing, cognitive computing, and artificial intelligence.

There are very high expectations being pinned on Industry 4.0. According to a manifesto of the World Economic Forum, “it represents a fundamental change in the way we live, work, and relate to one another. It is a new chapter in human development, enabled by extraordinary technology advances commensurate with those of the first, second, and third industrial revolutions. These advances are merging the physical, digital and biological worlds in ways that create both huge promise and potential peril. The speed, breadth and depth of this revolution is forcing us to rethink how countries develop, how organizations create value and even what it means to be human. The Fourth Industrial Revolution is about more than just technology-driven change; it is an opportunity to help everyone, including leaders, policy-makers and people from all income groups and nations, to harness converging technologies in order to create an inclusive, human-centered future. The real opportunity is to look beyond technology, and ways to give the greatest number of people the ability to positively impact their families, organizations and communities.”

These are big words I find hard to swallow considering that whatever industrial revolutions (one, two, or three) that the Philippines experienced over at least the last 100 years have left more than 20% of our population in dehumanizing poverty. That is why before we get too excited about the Fourth Industrial Revolution, let us first seriously examine whether or not we have had the three previous revolutions; and if so, what have they done to help us attain sustainable and inclusive growth. I would like to make sure that we all understand just exactly what happened in the late 18th century when the First Industrial Revolution was experienced by England. We may get insights into how to make sure that we are able to benefit as many people as possible in our country by first having an authentic Industrial Revolution 1.0, without ignoring some degree of Industrial Revolution 4.0 that we can selectively embrace to improve our ability to make sure that no one is left behind. It is also equally important to understand just exactly what characterized the other two industrial revolutions, IR 2.0 and IR 3.0. Has the Philippines actually undergone these two industrial revolutions, and if so, what benefits have they conferred to our goal of sustainable and inclusive growth?

Let me share with my readers what I wrote some 50 years ago in the textbook Guide to Economics for Filipinos that has been used by at least two generations of high school and college students. Vibal Publishing just came out with a 21st century edition of this textbook for Generation Z and shortened its title to Economics for Filipinos. Together with my co-author, Luis Molina, we present in this book of some 450 pages the basic theories and facts about Philippine economic development that every enlightened Filipino citizen should know. The discussion about Industrial Revolution 1.0 is preceded by a historical account of the evolution of the market economy that happened first in England.

There were many reasons why it first occurred in England. One of the chief reasons is that it was the first country to take a drastic step in eradicating the feudalistic structure of the countryside. That drastic step was called the enclosure movement.

This movement came about as the countryside grew increasingly money-oriented as contrasted with a predominantly barter economy. As the landed aristocracy (feudal lords) began to be pressed by rising prices and stagnating incomes, they came to view their landholdings no longer as mere estates which they shared with their respective serfs, but as potential sources of income. What they did then was to enclose their lands, especially the pasture lands that were known as “the commons.” In consolidating their landholdings, they proceeded to apply innovative techniques to the land, raising the productivity in agriculture — a giant leap from the stagnancy of the feudal system. This meant also a considerable number of former serfs were displaced from the land. As agricultural productivity rose, more labor was released from the farm. They trooped to the more urbanized areas to join the ranks of the unemployed.  This oversupply of labor depressed wages even more. With very cheap wages coupled with technological inventions (such as the spinning jenny and other water- and steam-powered machines to aid workers in their tasks), industries were stimulated.

It must be pointed out that the word “industry” was first used to refer to manufacturing. Today, national income accountants include other economic activities under “industry,” in addition to manufacturing. These other “industrial sectors” are construction, public utilities and mining. In the First Industrial Revolution (IR 1.0), textiles and transportation, in particular, benefited immensely from industrialization, and machine use in manufacturing became even more widespread with the use of coal as an additional fuel source.

The essence of the First Industrial Revolution was the use of steam power and mechanization of production. People previously produced threads on simple spinning wheels, but the mechanized version achieved eight times the volume in the same time. Steam power was already known. The use of it for industrial (manufacturing) purposes was the greatest breakthrough for increasing the productivity of workers. Instead of weaving looms powered by muscles, steam-engines could be used for power. The first weaving loom was introduced in 1784. As production efficiency and scale increased, small businesses grew from serving a limited number of customers to large organizations with owners, managers and employees serving a large number, giving way to the area of mass manufacturing.

The First Industrial Revolution could also be considered as the beginning of the industry culture which focused equally on quality, efficiency, and scale, ultimately based on the division of work made famous by Adam Smith. Developments such as the steamship or the steam-powered locomotive (during the Second Industrial Revolution) brought about even more massive changes because humans and goods could move great distances in fewer hours. This explains why the transport sector (as a public utility) can be classified as part of industry together with manufacturing.

A class of men began to fully exploit this opportunity of industrialization, employing the latest advances in technology in the manufacture of new products. These were the first capitalists in the western world. As they established numerous factories, they wrote a page in history that was to be known as the First Industrial Revolution which first occurred in England during the late 18th and early 19th centuries (1790 to 1830). Then it soon spread to the continent — throughout France and Germany —later during the 19th century. The United States was not too far behind, starting its take-off to development during the 1860s. Almost simultaneously with the US, Japan broke loose from centuries of feudalistic stagnation, upon the restoration of the Meiji Empire in 1868. It must be noted that in all these countries that experienced IR 1.0, capital accumulation was achieved by means of higher productivities in select sectors of agriculture. In England, highly productive agricultural innovations were implemented, including the use of new seed varieties, the planting of legumes as winter crops, crop rotation, and the draining of swamplands. The higher yield from agriculture provided city dwellers with cheap food and factories with raw materials. In the case of Japan, the importation of borrowed technology would not have been possible if silk, tea, and other agricultural products did not provide the necessary foreign exchange.

Given these experiences of the first countries to have their First Industrial Revolution, we can understand why some writers are unhappy with the phrase “industrial revolution.” Revolution connotes a sudden, abrupt, and explosive change. The actual process was far from sudden and abrupt. The feudal structure in Europe began to be undermined as early as the 10th century. The widening of the markets, the rise of the merchant class, the growing importance of a central government, the accumulation of capital, and, most importantly, the “green” or agricultural revolution took centuries to happen. What happened in England between 1790 and 1830 was only the logical climax of centuries of slow but sure changes in social structures and technology. Perhaps, a better phrase to use to describe the process of development is “industrial evolution.”

Bernardo M. Villegas has a Ph.D. in Economics from Harvard, is Professor Emeritus at the University of Asia and the Pacific, and a Visiting Professor at the IESE Business School in Barcelona, Spain. He was a member of the 1986 Constitutional Commission.