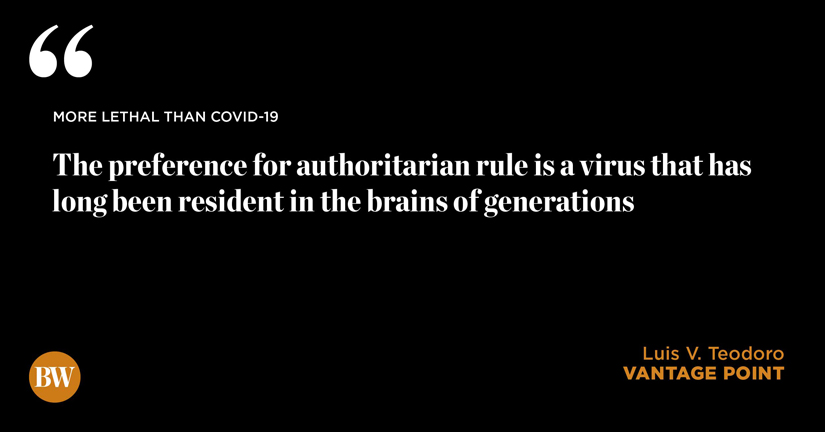 He has made the police his security guards and the military his private army, while both remain cogs in the killing machine that keeps him and his ilk in power and things the way they are and have always been. He controls both houses of Congress and has the Supreme Court majority for accomplices. Unscrupulous judges and even worse lawyers have surrendered their independence to speak for him and do his bidding.

His word is law to a corrupt civilian bureaucracy whose interests he has carefully nurtured to ensure their unquestioning support. He often sings paeans to independence and national sovereignty. But in addition to his own, he has made the political, economic, and strategic interests of his patrons in imperialist China as dominant in this country as those of the ruling circles of the United States.

He has unleashed on this country an unprecedented level of unchecked and unaccountable State violence as the simplistic “solution” to its most complex problems. With hardly anyone objecting, he has appropriated for himself, his family, and his cronies, and at the expense of the health, education, and welfare of the poor, the predator’s share of the national budget that’s sourced from the people’s taxes.

A de facto, populist dictatorship already rules these isles of fear and uncertainty. But if human rights defenders and other advocacy groups are correct, the worst is yet to come.

A report on the 2019 human rights situation in the Philippines quotes the Bangkok-based research and advocacy group Focus on the Global South’s warning that the Duterte regime is intent on expanding its already vast powers, purportedly so President Rodrigo Duterte “may effectively address corruption and all other problems born out of it.”

That message, says the Philippine Human Rights Information Center’s report, “The Killing State,” was implicit in Mr. Duterte’s 2019 State of the Nation Address (SONA), in which he admitted that his administration had failed to eradicate corruption. He declared in the same speech that his powers to do so are limited. In response, his cronies have proposed that he assume emergency powers to cope with corruption and even Manila’s traffic problems.

Mr. Duterte has since blamed the persistence of corruption on due process and the country’s democratic institutions, implying thereby that corruption could be eradicated only when State agencies ignore and dispense with such legal niceties as the right to a fair trial. But as the entire planet knows by now, the Duterte regime has been doing exactly that in its sham campaign against illegal drugs. That “war” has extrajudicially killed tens of thousands of the poor. It has also left behind it countless widows and orphans whose limited chances of survival have created a humanitarian crisis the regime doesn’t even care to acknowledge.

There are other indicators of Mr. Duterte’s obsession with absolute power, notes the report. Among them is his drive to restore the death penalty despite the Philippines’ ratification of the International Covenant on Civil and Political Rights (ICCPR) in 2007. Several bills that would do that have been filed by his agents and henchmen in both houses of Congress even if the restoration of the death penalty will be in violation of the ICCPR, which requires signatory states to respect the fundamental human right to life.

In the context of the far-from-perfect Philippine justice system, in which wealth and power often decide who is guilty or innocent, the restoration of the death penalty is also likely to be one more instrument against the poor and powerless as well as regime critics, to silence whom, as the regime has demonstrated in many instances, a legion of outlandish charges can be manufactured.

As if this were not enough, the report also points out that amendments to the already oppressive and misnamed Human Security Act — whose definition of “terrorism” includes any act hampering the operations of public utilities — will further strengthen the primacy of State power over human rights by, among others, permitting the detention without charges of suspected “terrorists” for 14 days. Sponsored by the most vocal advocates of the police state, a bill that precisely mandates that is also pending and likely to pass.

But these are only the more flagrant but misleading indicators of the continuing drive to dictatorship. Despite the likelihood of their approval by the supposedly independent Congress, they can be misconstrued and dismissed as aberrations sponsored solely by Mr. Duterte’s more fanatical partisans rather than as part of a plot to complete the return to authoritarian rule.

What has been mostly unremarked is the unrelenting conspiracy to amend or change the Charter altogether, despite public opposition to it, so as to endow with constitutional legitimacy such other regressive, anti-human rights, self-serving and treacherous proposals as the savaging of the Bill of Rights and the abolition of the anti-dynasty provisions of the 1987 Constitution. Equally under threat are those articles in the same basic document prohibiting foreign ownership of the mass media, and which prevent foreign professionals from practicing in the Philippines.

To these threats to life, liberty, human rights, and the national patrimony, the majority of Filipinos shrug their shoulders in indifference. Some even support tyranny and the march to strongman rule. They welcome the impending return of the death penalty, and join the chorus of hate against human rights defenders, the political opposition, and progressive churchmen and women. Mr. Duterte’s repeated threats to kill, kill, kill the perceived enemies of his regime, whether businessmen, bishops, or political activists, they applaud with shouts of glee.

They despise civility, intelligence, logic, and reason. Whether misinformed, blissfully and unknowingly ignorant, or misled by the heralds of those interests that seek a repetition of the country’s descent into an authoritarian outrage worse than the Marcos kleptocracy, the poorest as well as the presumptively educated think democracy a failure and those who espouse and defend it their enemies. They disparage reformists and critics of the incompetent and corrupt rule of the bureaucrat capitalists who use political power to enrich themselves, and celebrate those traitors as the country’s saviors.

The result of this cluelessness and indifference to the common good is the country’s continuing underdevelopment and millions of Filipinos’ rapid descent into the bottomless pit of poverty, hunger, injustice, and mass misery. An information crisis abetted by the regime’s “fake news” hucksters is among the forces behind it all. But there is as well the unwillingness and refusal by too many of the men and women who care only for themselves to heed the facts and to learn from the past. In its place is a version of reality and history drawn from the colonial and feudal traditions and fomented by the self-aggrandizing dynasties that rule them today as brutally and as uncaringly as the Spanish conquistadores did.

It explains why, despite the facts, eyewitness accounts, and the mountain of evidence to the contrary, even supposedly educated Filipinos hail the Marcos dictatorship as a golden age, despite its denying their forebears their right to govern themselves — which they prefer over the sovereign duty of assuming the responsibilities of democratic rule.

Driven by their contempt for what they think is democracy in this country of illusions, the preference for authoritarian rule is a virus that has long been resident in the brains of generations. Hence the continuing threat, and now the awful reality, of a national contagion of despotism far more lethal than any coronavirus. Against it only a free people’s unity and resistance can prevail. But there’s the rub, for there is so very, very little evidence of either.