The results of a study conducted by the COVID-19 Pandemic Response Team of the University of the Philippines showed that the Luzon-wide enhanced community quarantine (ECQ) has been effective in slowing down the spread of the coronavirus SARS-CoV-2 which causes COVID-19. The fatality rate of 5.38% as of April 10 is indicative of the effectiveness of the ECQ. Based on data provided by the Department of Health, the team estimates there would be around 9,000 to 44,000 cases by the end of this month. In a best case scenario there would be 484 deaths, or 2,367 in a worst case scenario.

Based on Department of Labor and Employment (DoLE) data, 108,620 workers from 2,317 establishments were affected by the ECQ in Luzon. As many as 600 companies closed down their business, rendering 30,796 workers jobless. But on March 31, DoLE Secretary Bello said that the affected workers increased to more than 630,000, covering 15,213 establishments. According to him 169,232 of the affected workers belong to the informal sectors — those who are not registered with any government agency like the Bureau of Internal Revenue. Among them are jeepney drivers, tricycle drivers, construction workers, public market vendors, cottage industry workers, casuals in certain types of business, etc.

Bangko Sentral ng Pilipinas (BSP) Governor Benjamin Diokno said that the Luzon lockdown will slow down the economy with a disruptive impact. The National Economic and Development Authority (NEDA) adjusted its forecast of 6.5% to 7.5% growth to 5.5% to 6.5%. The Asian Development Bank (ADB) said the impact of the COVID-19 on the Gross Domestic Product would be about between 0.0 and -0.5 percentage of the GDP in a best-case scenario and slightly near -0.5 percentage of the GDP in a worst-case scenario.

The almost P400 billion that Congress allotted to sustain the country’s poor is fast running out. President Duterte has hinted that a protracted ECQ would exhaust the government coffers and might force him to sell government assets.

But the greatest impact of the “stay home” order is on the social aspect of the lives of the great majority of the 13 million residents of Metro Manila. And I am not speaking of the hundreds of thousands of poor people who have no home to stay in. I refer to those who live in informal settlements or shanty towns.

Hovels with living areas no larger than the lobby of a bank branch are homes to the great majority of Metro Manila residents. The 30 square meter area is living, cooking, dining, and sleeping area. All members of the family sleep side-by-side, with maybe flattened corrugated boxes as their “bed” or mattress. More than one family live in many of those hovels.

With food meager or even unavailable due to the loss of livelihood, the small space occupied by 10 or more people all day long, the summer heat wearing them down and no running water to cool them off, with fear of the virus overcoming them, and the future looking very bleak, mental and emotional breakdowns among members is almost inevitable. Worst if more than one family live in those shacks.

People who leave the hut for a breath of fresh air or to get away from the anger, ranting, or whines of a co-resident are confronted by policemen or soldiers and threatened with imprisonment. In effect, violators of the order would be punished with greater exposure to the coronavirus for not staying home to avoid exposure to the same virus.

In its effort to protect the people from SARS-CoV-2, it put their mental health in jeopardy. The Department of Health (DoH) should also render a count on those whose mental health has deteriorated considerably due to the curtailment of their freedom of movement and on the number of deaths due to suicide or to injuries arising out of the mindlessness of mentally ill people.

The DoH has done 72,000 tests from the start of testing in early March to last week. Among those tested, 7,192 are confirmed to have been infected by the SARS CoV-2 virus. The DoH thinks it has tracked only a quarter of projected infections. Therefore the projected total of SARS-CoV-2 infections is 28,768. There have been 477 deaths out of 7,192 COVID-19 cases or 6.6%. Therefore, of the projected total number of 28,768 COVID-19 cases, there would be 1,898 deaths due to COVID-19. These numbers are not significantly different from those the UP COVID-19 team came up with.

Smoking in public places is prohibited, cigarettes are heavily taxed to cut down the number of lung cancer cases. To reduce pollution of the environment and consequently to reduce the number of respiratory disease-related cases, exhaust systems of vehicles have to be cleared for the vehicle’s license to be renewed by the Land Transportation Office. Alcoholic beverages are also heavily taxed to cut down the number of cardiovascular and cirrhosis of the liver cases. Sugary beverages are also taxed high in response to the increasing number of diabetes cases. But all these are puny compared to the government’s response to SARS-CoV-2.

Let us compare the SARS-CoV-2 statistics with those of the ten leading causes of death in the Philippines. 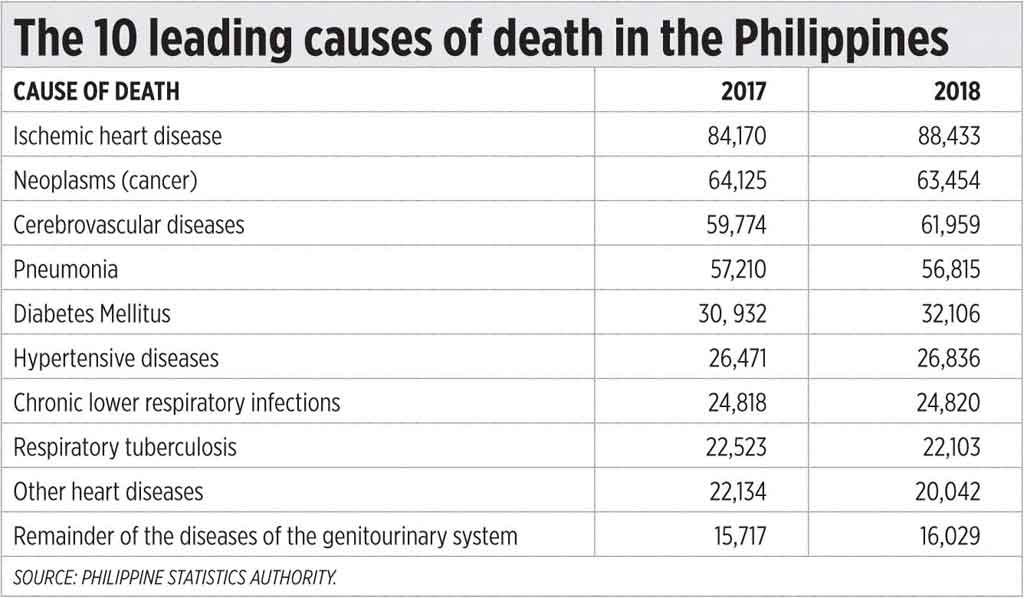 There is a great concern for the elderly because their immune system has been much impaired by age-related ailments. SARS-CoV-2 infection could mean intensive medical care for them. But the enhanced community quarantine has had deleterious effect on the health of a lot of people. Precisely because the elderly are afflicted with age-related disease such as hypertension, diabetes, genitourinary disorders, their conditions are monitored. Most of them have to consult their cardiologist, endocrinologist, nephrologist, urologist, every three or four months. But they have to have blood tests so their doctor can better diagnose their state of health.

But the “stay home” order prevents them from going out to have a blood test and seeing their doctor. Also, the lockdown had closed the diagnostic centers.

Likewise, dental clinics have been closed by the lockdown. Infection of the gums could lead to heart disease. Then there are those who have had major operations: open heart surgery, organ transplant, tumor excision, etc. — before the imposition of ECQ. They are prevented from seeing their doctors for check-ups because they are confined to their homes.

To beat SARS-CoV-2, DoH officials advise people to stay healthy by boosting their immune system, exercising, and eating lots of vegetables and fruits. But residents of a plush condominium tower were threatened with arrest for soaking in the sunshine in the small garden of their condominium. Jogging in the streets is prohibited in most subdivisions in Metro Manila. At the beginning of the ECQ, vegetables and fruits were not available in Metro Manila because the many checkpoints along the way prevented them from reaching the grocery stores. Benguet, a rich source of vegetables, is among those areas under ECQ.

Why not let the people have freedom of movement and just let them take their own precautions? As the DoH had advised, people should wash their hands thoroughly, keep a one-meter distance from other people, avoid gatherings, and boost their immune system by exercising and eating healthy food.

Nobody can predict when SARS-CoV-2 will vanish from our land. Will Metro Manila and some parts of Luzon remain quarantined indefinitely or until the economy has collapsed totally and social order broken down?

DBM queried on authority to stall devolution to LGUs