THE COUNTRY’S exports and imports of goods continued to post double-digit growth in August amid a recovery in global markets, the Philippine Statistics Authority (PSA) reported on Tuesday.

Preliminary PSA trade data showed the value of merchandise exports went up by 17.6% year on year to $6.47 billion. The August result marked a turnaround from the 12.7% drop in the same month last year and was faster than the revised 13.8% growth in July 2021.

Meanwhile, merchandise imports grew by 30.8% year on year to $10.04 billion in August, a reversal from the 17.5% decline a year ago and slightly up from the revised 29.5% expansion in July. 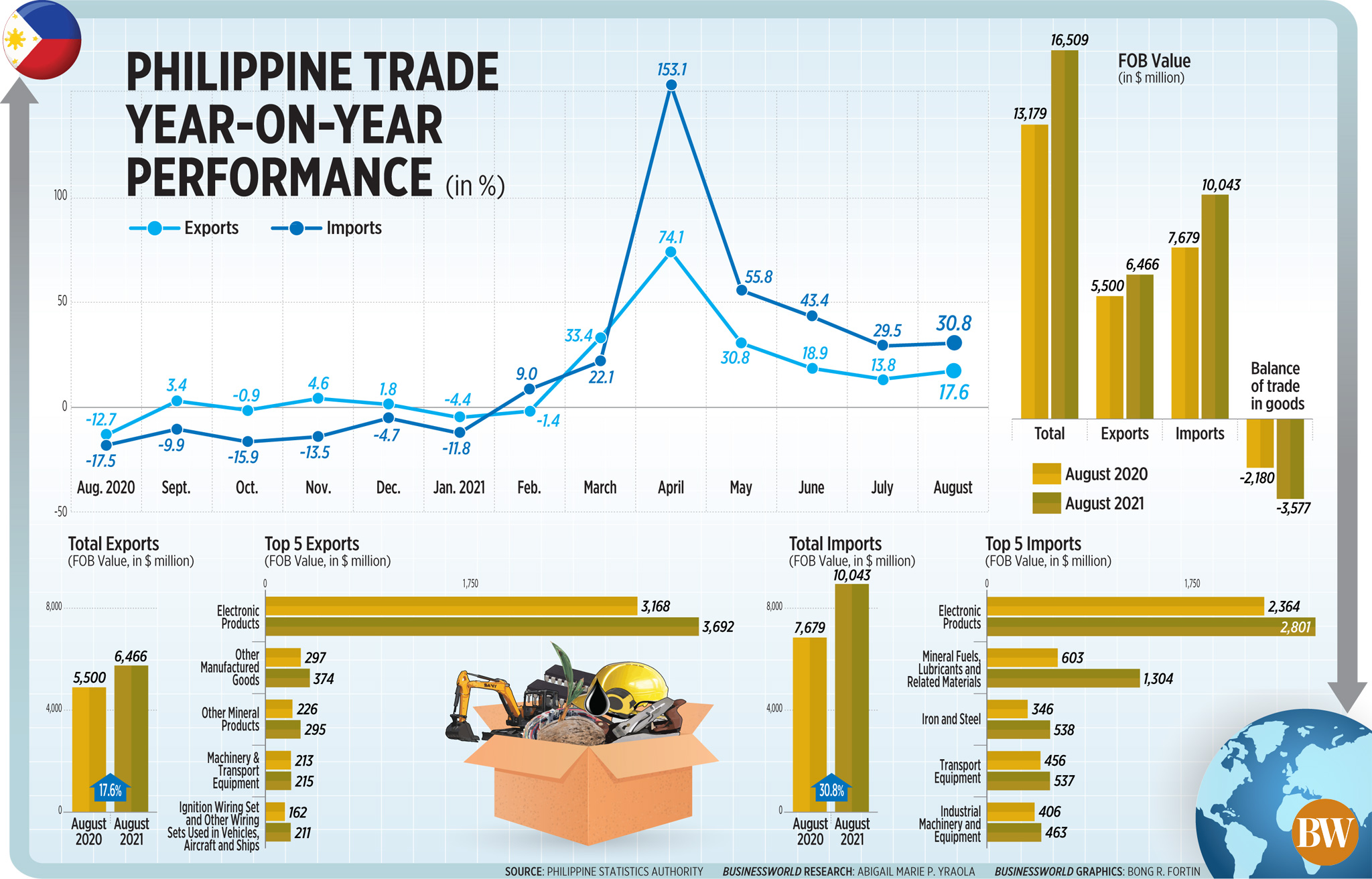 The export and import figures in August brought the country’s trade balance to a $3.58-billion deficit, wider than the $2.18-billion gap in the same month last year. However, the August figure was narrower than the revised $3.66-billion deficit in July.

For the first eight months, exports and imports grew by an annual 19.6% to $48.93 billion and 31.1% to $74.18 billion, respectively. These continued to surpass the Development Budget Coordination Committee’s targets for exports and imports at 10% and 12% for the year.

Exports of manufactured goods grew by 16.4% to $5.36 billion in August. These made up 82.8% of the total overseas sales during the month.

Exports of electronic products, which accounted for 57.1% of the total merchandise exports jumped by 16.5% year on year to $3.69 billion. Semiconductors, which made up almost three-fourths of electronics, rose by 14.9%.

“Export growth is sustained by the continued recovery in global markets. This is also fueled by increased consumer spending as the holiday season approaches, complemented by our growing manufacturing sector,” Trade Secretary Ramon M. Lopez said in a statement.

Economists attributed the sustained growth in international trade to the recovering supply and demand in the economy.

While base effects were a factor in the latest trade data, it “does not diminish the positive aspects of the report,” Bank of the Philippine Islands (BPI) Lead Economist Emilio S. Neri, Jr. said.

Mr. Neri also pointed to the global manufacturing boom as reflected in increased demand for exports of manufactured goods and imports of raw materials.

“Despite the recurring lockdowns in Metro Manila and other parts of the country, businesses and consumers have done several adjustments that mitigate the impact of COVID-19 (coronavirus disease 2019) on economic activity. For instance, e-commerce has grown substantially and the number of transactions in this platform is increasing every day,” Mr. Neri said.

Security Bank Corp. Chief Economist Robert Dan J. Roces, on the other hand, pointed to the narrow trade figures on a month on month.

“We may link the August trade figures with that of manufacturing production, which succumbed month on month on the back of reduced capacity utilization due to the lockdown,” he said in an e-mail.

In a statement, ING Bank NV Manila Senior Economist Nicholas Antonio T. Mapa said the pace of expansion in trade “remains much to be desired given the stop-go nature of partial lockdown measures and relatively low vaccination rates.”

Mr. Mapa said trade was “at least a year away” from pre-pandemic levels.

“The silver lining is that import flows signal at least a modest pickup in demand activity as mobility has returned somewhat. Rising raw material imports and capital goods also signal likely improved demand as firms and the government work to catch up from the months-long backlog of foregone investment activity that set back Philippine productivity,” he said.

CONCERNS
Mr. Mapa noted that with the trade gap widening, concerns about the country’s current account deficit are likely to surface as the twin deficits consisting of current account and government budget shortfalls “threaten the pace of recovery.”

The current account depicts the country’s overall economic interaction with the rest of the world and includes flows related to trade in goods and services, remittances from overseas Filipino workers, profit from Philippine investments abroad, interest payments to foreign creditors, as well as gifts, grants, and donations to and from abroad.

As of the first half, the country’s current account balance stood at a deficit of 0.7% of gross domestic product (GDP), based on data from the Bangko Sentral ng Pilipinas (BSP). This marked a reversal from the current account surplus of 3.1% of GDP in 2020.

Meanwhile, the National Government’s budget deficit ballooned by 20.4% to P958.2 billion in the eight months to August, data from the Bureau of the Treasury showed.

“With the current account balance swinging back into the red and the similar reversal in flows on the financial account, we could see the balance of payments edge closer to the red resulting in a weaker currency,” Mr. Mapa said.

“[The peso] has come under depreciation pressure of late, all the more lagging the region with the [Thai baht], whose countries are both still struggling under the weight of the pandemic. We can expect [the peso] to face a depreciation bias to close out the year especially with sentiment shifting back to developed market currencies, whose countries have fared much better in terms of pandemic response and as a result have enjoyed a quicker rebound for their economies,” he added.

“The BSP indicated before that the foreign exchange pass-through on inflation has diminished over the years. Judging from the recent spike in prices which are more directly related to domestic food supply chains, we’d have to say that [the foreign exchange] pass-through does have an impact, but it will not be the main determinant to the overall inflation dynamics,” Mr. Mapa said in an e-mail.

Mr. Neri said the inflationary pressure “will continue not only from imports but from unwinding of ultra-easy monetary policies of global central banks.”

“This will be worse if our own central bank refuses to adjust its own policy settings,” Mr. Neri said, adding that he expects a rebound in domestic demand and imports once the country vaccinates more Filipinos.

PSA data showed inflation averaging 4.5% as of September, still above the BSP’s 2-4% target this year and above the forecast of 4.4% for the entire year. — Ana Olivia A. Tirona

Auto sales pick up in March

Ease of setting up and closing down business operations