Virtue signaling is the process and habit of taking a conspicuous but generally unproductive action supposedly to advance a good cause but actually to show off the “moral supremacy” of the person or group  compared to the rest of the population.

In the energy sector, it is the habit of some people and groups to tell others that they are anti-environment and anti-planet if they do not demonize fossil fuels, especially oil and coal, and embrace variable renewables like wind and solar.

While this behavior may be understandable in industrialized and rich economies which have ample power capacity, this behavior is counter-productive for poor economies with thin power capacity. The Philippines is a classic example of this and yet it is constantly and endlessly bombarded by many virtue-signaling groups and multilaterals that it must “decarbonize” as soon as possible.

Of the countries and economies listed in the table on a per capita or per person basis, the Philippines has the smallest CO2 emissions, the smallest primary energy consumption (PEC), and among the smallest coal consumption. PEC includes all energy use from power and electricity to transportation, household and commercial cooking (see the table). 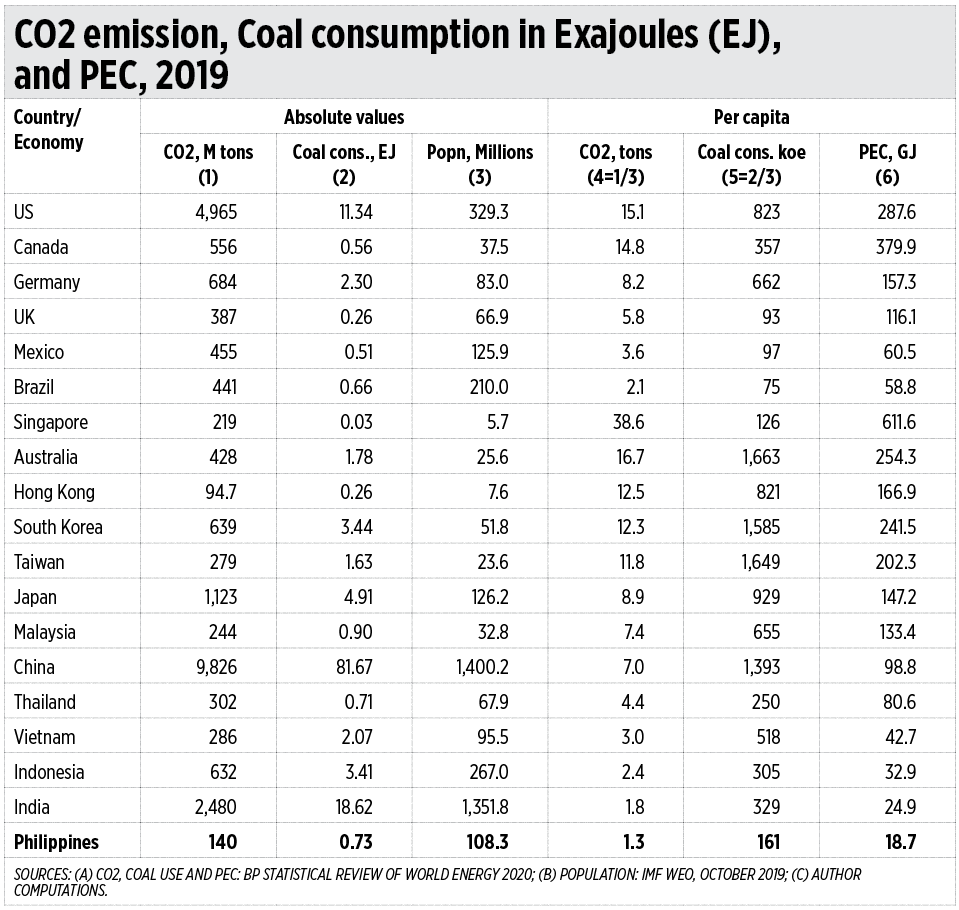 So what is the point in endlessly bombarding the Philippines public and government energy officials to hasten decarbonisation and quitting oil-coal usage, and push the country towards more energy poverty and economic underdevelopment?

Take these two stories in BusinessWorld of lobbying by groups for more decarbonisation:

I have also read and heard in some public lectures some officials of a big gas power company here demonizing oil-coal for their high greenhouse gas (GHG) emissions of CO2, without admitting that gas as fossil fuel is also a significant GHG emitter of methane. Even anti-coal campaigner Greenpeace also turned anti-gas, arguing that gas has high methane emission.

Meanwhile, I attended the Market Participants Update (MPU) organized by the Independent Electricity Market Operator Philippines (IEMOP) on July 3. The market participants are the various private players in the sector, the 279 members of the Wholesale Electricity Spot Market (WESM) like the transmission system operator, generating companies (gencos), distribution utilities, and electric cooperatives. Plus 1,581 participants of the Retail Competition and Open Access (RCOA) like retail electricity suppliers (RES) and contestable customers.

WESM and RCOA are two of the most beautiful provisions of the EPIRA law of 2001 that directly benefit electricity consumers. WESM ensures fierce competition among gencos and RCOA ensures competition in electricity retail and distribution. And that is why the EPIRA law should not be junked or tinkered with as proposed by some groups that irrationally advocate re-nationalization and state re-monopolization of the power sector.

I requested updated data from the IEMOP and here are some interesting trends in the Luzon-Visayas grids as a result of ECQ-GCQ policies.

Two, average prices (ESSP) over the same quarters have changed or declined by P5.59/kwh.

The main lesson here is that if people want cheaper electricity and stable power supply, we should strengthen the spot market system, expand WESM to Mindanao soon, maintain the “energy-agnostic” policy of Secretary Alfonso Cusi and not promote energy favoritism and cronyism for variable renewables.

How sweet it is