Some countries and economies have released their first quarter (Q1) 2020 GDP growth data already and I compared the growth rate of those that imposed a hard lockdown with those that have no or a light lockdown. The result is interesting (see Table 1). 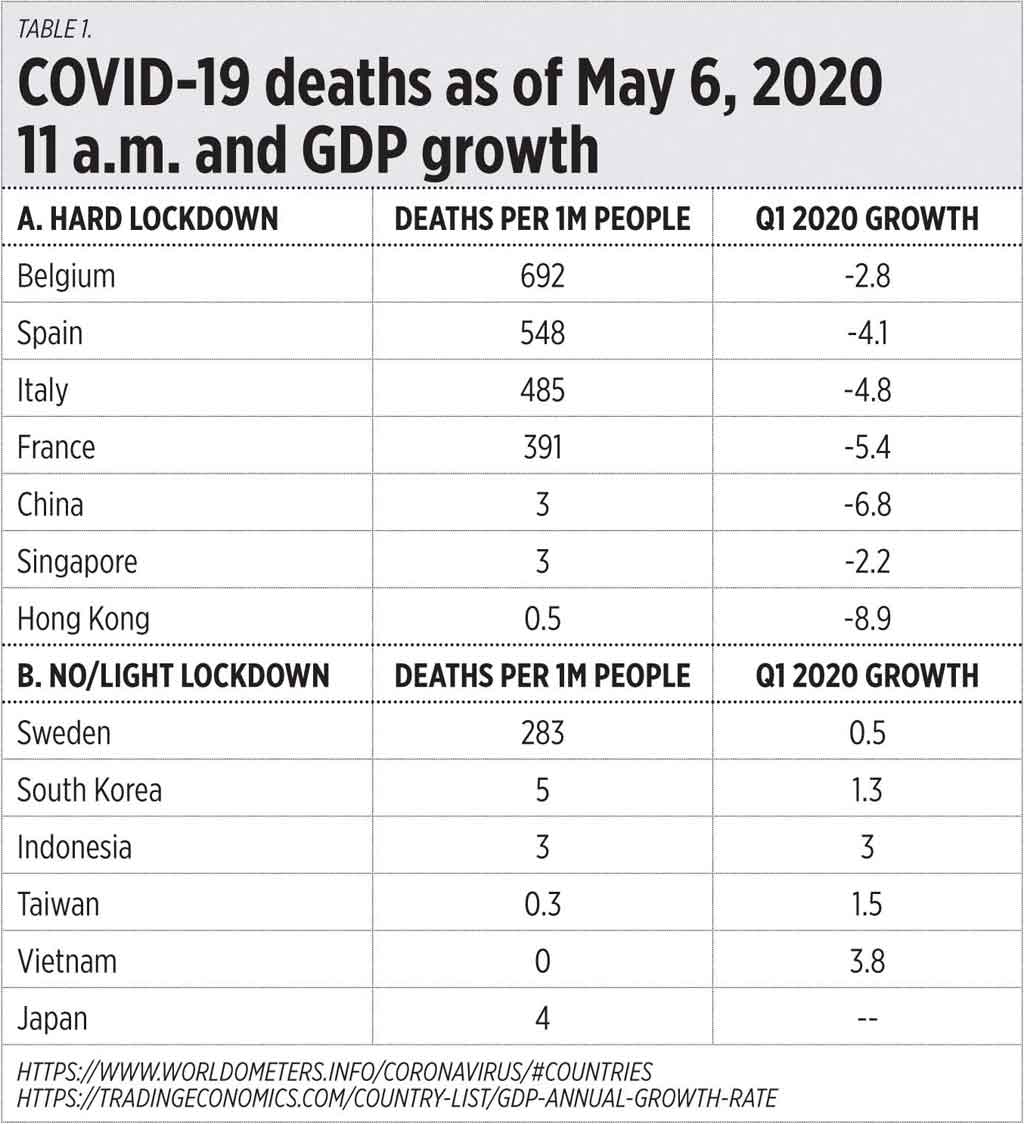 Sweden did not impose a lockdown and nor business shutdowns yet it has fewer deaths per 1 million people compared to four other European countries, and it managed to escape growth contraction.

The same is seen for Asian economies with Q1 2020 data as of this writing — hard lockdown economies China, Hong Kong, and Singapore suffered contractions.

The Philippines will report its Q1 2020 growth on Thursday. One indicator of how bad things are in the country is the huge drop in electricity demand as many businesses were shut down. Consequently, electricity prices at the Wholesale Electricity Spot Market (WESM) declined big time in March-April (see Table 2). 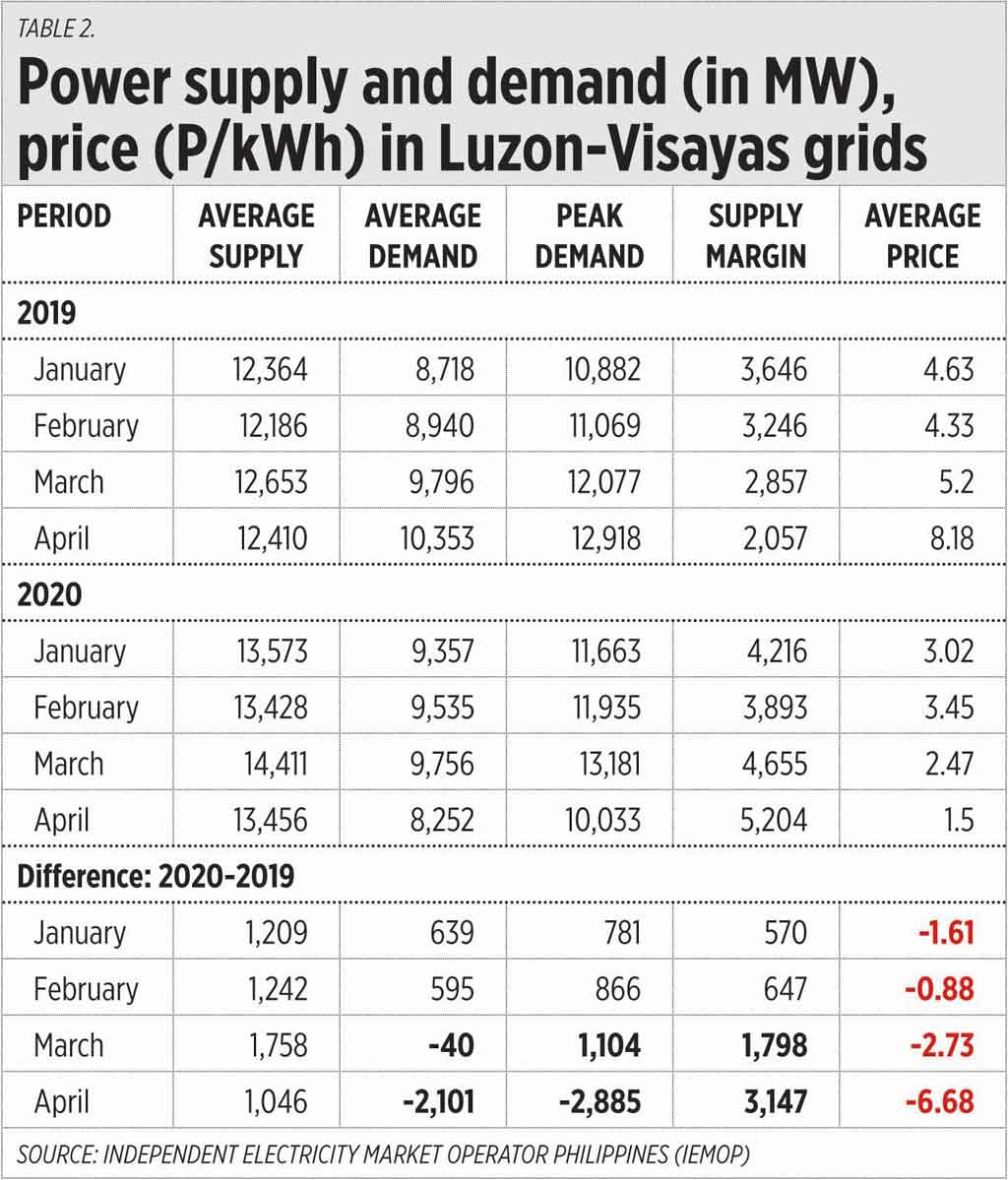 NOT SO FREE ELECTRICITY
With a huge decline in electricity prices — of P2.73/kWh in March then P6.68/kwh in April 2020 compared to their year ago levels — there is no reason or justification for certain populist and socialistic groups to call for “free electricity” for lifeline customers (those who consume 50 kwh per month or less). Big losses were experienced by many generation companies (gencos) at these low prices.

The deep decline in electricity demand is an indicator of deep business losses starting March 16 when the enhanced community quarantine (ECQ) was imposed. The extension of the ECQ until May 15 was wrong and there should be no further extension beyond May 16 even for a single day.

SOLAR POWER WOES
A group of residents of Paluan, Occidental Mindoro sent me some materials about the sudden rate hike by the Solar Para sa Bayan Corp. (SPBC). This firm was granted a Congressional franchise via RA 11357 (July 31, 2019), the only genco in the country that was granted a legislative franchise. The firm is headed by Leandro Leviste. SPBC promised cheap electricity because the sun is free. True, the sun is free but the solar panels, the power conditioning unit, AC and DC disconnect, and other components are not free. Transportation and installation in far away areas are not free. The batteries to extend power for a few hours at night, backup diesel generating units for use at night, are not free.

In a site inspection in some barangays in Occidental Mindoro served by SPBC conducted by the Philippine and Rural Electric Cooperatives Association, Inc. (PHILRECA) in November 2018, they found out that aside from almost daily blackouts for several hours, while the rate started at a low P2.34/kWh it later rose to P11/kWh.

In a letter dated Feb. 13, 2020, SPBC informed its customers that it would raise its rate to P18/kWh because it needed to upgrade solar PV, procure its own diesel generating units, and it was still waiting for its subsidy (missionary electrification). I summarized the evolution of pricing by SPBC (see Table 3).

SPBC employed deception when it promised “cheap electricity” in seeking a Congressional franchise. Intermittent energy like solar will not be cheap, there should be backup units like battery and diesel gensets and the purchase of diesel fuel — and these are not cheap. Solar hates shade — from tall trees, thick clouds, and rain. Shade immediately reduces solar output.

The Energy Regulatory Commission (ERC) and LGUs should not grant the SPBC that big and sudden rate hike to P18/kWh, nearly double what electricity consumers in various electric cooperatives and private distribution utilities pay, despite paying many other charges (transmission charge, distribution charge, system loss, universal charge, etc.). SPBC should stick to its mandate of providing low electricity prices under RA 11357.

Mindoro island (composed of two provinces), along with other island-provinces like Palawan, Masbate, Marinduque, and Bohol should also get their own baseload power plants and not rely on huge gensets and endless subsidies via the universal charge for missionary electrification (UC-ME) that are passed on to all electricity consumers nationwide.

Lowering electricity prices in the Philippines is possible via the eradication of unnecessary costs like the UC-ME, reducing the feed-in-tariff (FIT) allowance for variable renewables, and reducing the wide and thick bureaucracies before gencos can put up new power plants, which contribute to higher power costs.

Having cheap, stable electricity, no blackouts even for a minute, is an important factor to allow the Philippines to bounce back from the growth lockdown because of the prolonged and extended ECQ.