COVID-19 said it to the whole world: stay home. With the lockdowns of their communities, countries humbly said yes. It seems it is only in the Philippines that the term “lockdown” has been so fearfully avoided, but call it by whatever name, “enhanced community quarantine” is a lockdown — both a lock-in and a lock-out, where plain quarantine is simply a lock-in. Whatever, just stay home.

“Enhanced Community Quarantine” (ECQ) is the official nomenclature for the government’s master plan launched on March 17 for the containment of the COVID-19 which was declared to be a Public Health Emergency of International Concern (PHEIC) by the World Health Organization (WHO) on Jan. 30. A pandemic, that is what the PHEIC is, but the WHO seemed coy at first about using certain words that stir passion. And now our Department of Health (DoH) and other involved agencies of government repeatedly tell the public not to panic.

But panic cannot be banned like banning travel and movement to and from the isolation area. Panic is the human regret on an assessment post facto of what might have been done early enough not to be in this sorry situation, and a fear for one’s vulnerability that there is not yet a solution or at least protection to this strange new virus. In this day and age of advanced technology and instant information and communication, why did the world not react sooner to slay the dragon that came from Wuhan, China — this appalling COVID-19?

Should the airports of the world not have been already on high alert for inbound passengers from Wuhan back then, when the Wuhan Municipal Health Commission had already announced the first death caused by the new coronavirus on Jan. 11, and the second death on Jan. 17? Thailand had reported its first case of an infected Chinese national who had arrived from Wuhan on Jan. 13, and Japan its first infection on Jan. 16, according to the timeline of CNN (March 19, 2020). By Jan. 20, China reported 139 new cases of the sickness, including a third death.

Real time global tallies provided by Johns Hopkins University, CSSE (https://systems.jhu.edu/) as of yesterday morning, March 22, show 168 countries with 304,528 confirmed cases of COVID-19, where 12,973 or roughly 4.25% have died from the virus. The top 15 most affected and afflicted are listed in the Table here. 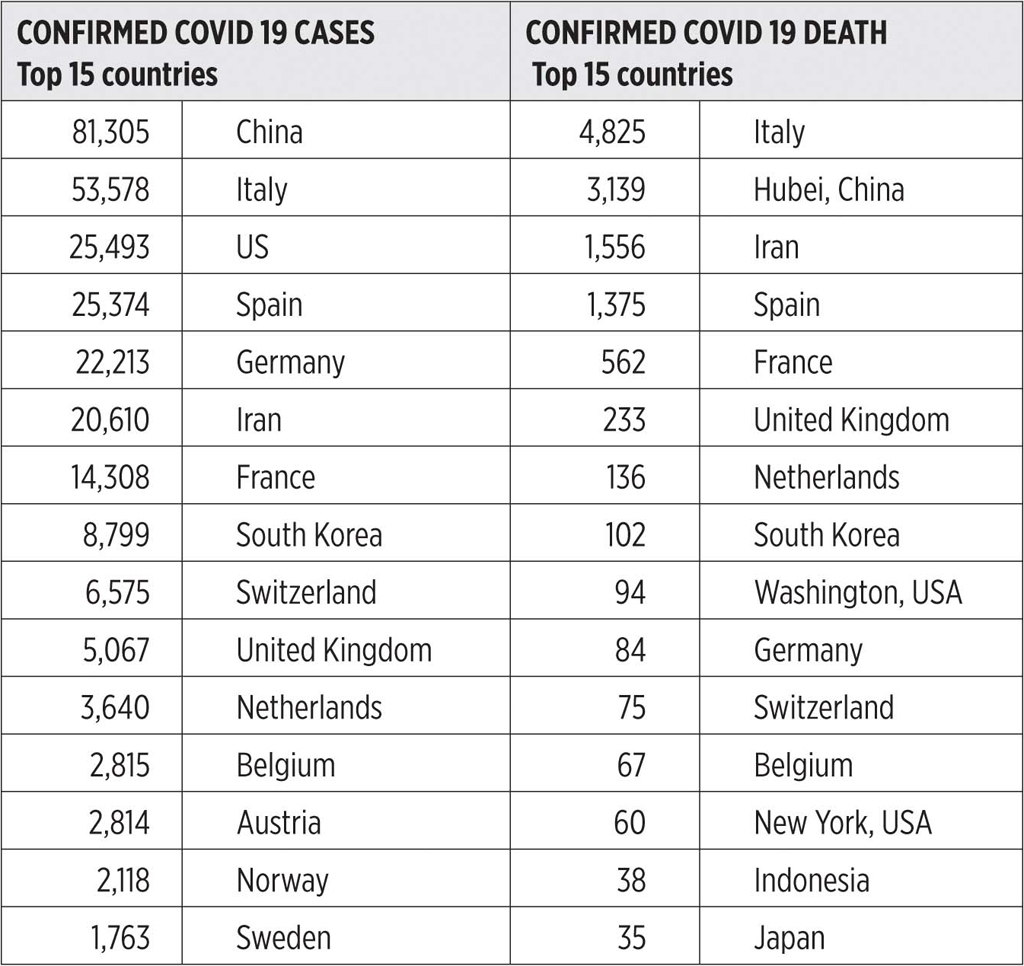 The immediately evident culprit for the spread of the virus is travel. The first case known of a coronavirus-infected airline passenger (neither the virus nor the disease it causes was named yet then) was on Jan. 13, when Thai airport authorities reported a Chinese national who had arrived from Wuhan. Three days later, Japanese authorities confirmed that a Japanese man who traveled to Wuhan was infected with the virus. In the succeeding days, a second and a third man died from the yet-unknown virus in China. When on Jan. 21, when officials in Washington State confirmed the first case on US soil, the US screened all arriving passengers in its airports and rejected all those who had Wuhan in their recent travel history. Alas, a whole planeload of passengers from Wuhan arrived in the Philippines on Jan. 21. They were allowed to mix and mingle with society until one really sick Wuhan tourist asked for medical assistance on Jan. 25, but died on Feb. 7.

And so President Rodrigo Duterte declared first a “community quarantine” for Metro Manila on March 16, expanded the quarantine area to the whole of Luzon on March 17, therewith declaring a state of calamity for six months for the whole country — basically for the mobilization of funds for local government units to provide logistics for police to physically contain people in their areas and health officials to treat patients, and help them to recover. According to Johns Hopkins monitoring, 92,296 or 30.2% of total confirmed cases have recovered around the world, the most (approximately 77%) coming from China.

It is most thought-provoking in this time of COVID-19 that this is probably the first time in history since the World Wars (now 75 years ago) that the world has so carefully repaired and rebuilt national boundaries — purposely, and not by political whims, by the lockdowns in many communities in many countries, and the self-quarantine of individuals themselves, who see the need for protection and survival. The airports and seaports are mostly closed to inbound travel. For at least 30 days, this lock-in, lock-out situation will rule the world — never mind maximizing trade and commerce for the meantime. All sharing and taking between nations, communities, alliances and between individuals will only be for the continuing humanitarian supply of basic needs like food and medicine.

Pwede pala, so it can be done. In the quarantines and lockdowns, it is as if the world stood still, to re-assess the speed of its rotation around the worshipped sun of prosperity. In the slacked pace forced by the COVID-19, perhaps introspection will be on self-reliance and sustainability, in lieu of the gross taking from the other to gain more than what is needed — that is called Greed. After the World Wars, the race for power and wealth among nations has become another extended war. The economics of scarce resources was altered by the rush to globalization and borderless resources.

NBA Players to receive 25% less pay from May 15