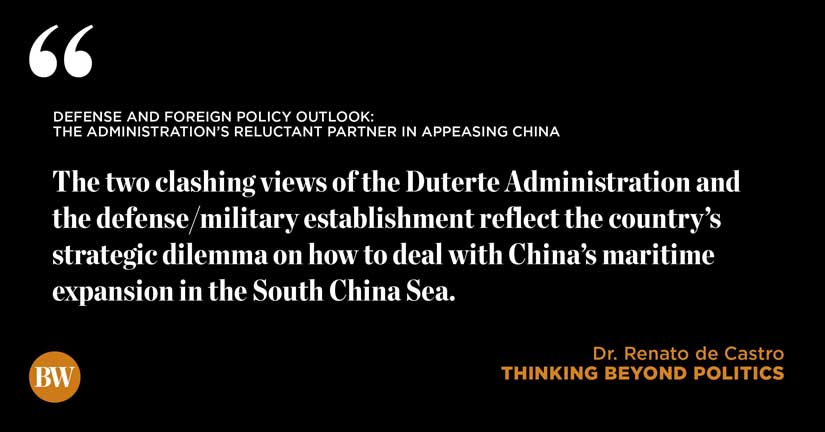 The Armed Forces of the Philippines (AFP) is the administration’s reluctant partner in its appeasement policy on China. The Philippine military has been very wary of closer Philippine-China economic relations in particular, and on the so-called “pivot to China” in general. The wariness stems from the fact that it has a long and close relationship with United States Armed Forces.

For seven decades, the US armed services and the AFP has been training and consulting each for combined combat and humanitarian operations. These military exercises have provided opportunities for the AFP to enhance its readiness in developing relevant and responsive military forces across the various mission areas and promote cooperation and interoperability between the Philippines and US armed forces. Interoperability in terms of military doctrines and common strategic outlook and mindset has also been developed aside from equipment, intelligence, navigation, and communications.

Consequently, in several instances, the Philippine military has pushed back at President Rodrigo Duterte’s efforts to effect the Philippines’ “separation” from the United States, such as his plans to remove US Special Forces from Mindanao, decrease the number of joint military exercises, and to terminate joint naval patrols between the Philippine and US navies in the Philippines’ Exclusive Economic Zones (EEZ). In addition, the perceived “comprehensive, strategic cooperation” under the 29 Memorandum of Understanding (MOUs) signed by President Xi Jinping to promote closer cooperation between the People’s Liberation Army (PLA) and the AFP have not materialized.

WARNING ABOUT CHINA’S GROWING NAVAL PRESENCE
On Aug. 15, 2019, Philippine Defense Secretary Delfin Lorenzana announced the incursion of several Chinese warships into the country’s territorial waters without prior coordination with the AFP. He opined that China was taunting the Philippines because the Chinese warships’ Automatic Identification System (AIS) was switched off and they ignored the radio communications from the AFP units monitoring their passage in Sibutu Straits in Tawi-Tawi. He also maintained that the People’s Liberation Army’s Navy (PLAN) violated an earlier commitment from the Chinese ambassador in Manila that the Philippines will be informed in advance of any movement of Chinese naval vessels in the country’s territorial waters. 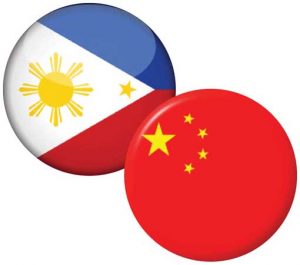 A month earlier, Secretary Lorenzana revealed that Chinese warships transited through the Sibutu Straits in four instances at the start of 2019 without informing the Philippines. The Philippines requires foreign navies to seek diplomatic clearance from the Philippine government when they pass through the country’s territorial waters, and that historically, the world’s major navies have observed this protocol — until this incident with the PLAN ships. Consequently, the defense secretary recommended the filing of a diplomatic protest by the Department of Foreign Affairs (DFA) following the series of suspicious and unauthorized transits of Chinese warships in Philippine waters including the passage of two Chinese survey ships in the country’s EEZ.

Secretary Lorenzana’s strong statement on the unauthorized passage of PLAN ships was triggered by the report of Lieutenant General Cirilto Sobejana, commander of the AFP’s Western Mindanao Command (WestMinCom). General Sobejana reported, during a regular Maritime Domain Awareness (MDA) operation in the southern Philippine island of Tawi-Tawi, that four Chinese warships passed through the country’s porous southern backdoor. These Chinese naval vessels were not hostile when the Philippine Air Force (PAF) planes and Philippine Navy (PN) ships approached and observed them. However, the ships’ sailing pattern appeared to be highly suspicious, zigzagging and not sailing straight as civilian ships should do during an innocent passage.

Then AFP Chief-of-Staff, General Benjamin Madrigal, Jr., commented that this series of unauthorized passages of PLAN ships in Sibutu Straits and in other territorial waters of the Philippines is a national security concern that could lead to confrontations between China and the Philippines.

The two clashing views of the Duterte Administration and the defense/military establishment reflect the country’s strategic dilemma on how to deal with China’s maritime expansion in the South China Sea. After almost three years of pursuing a policy of appeasement on China, the Philippines is incrementally shifting to “limited hard balancing” to constrain China’s revisionist agenda. Specifically, this strategy entails building up the Philippine military’s territorial defense capabilities, maintaining its alliance with the US, and forging security partnerships with Japan and Australia. These are manifestations that the Philippines, despite its appeasement on China, is standing up (albeit hesitantly) to the Chinese challenge in the South China Sea.