THE NATIONAL Government’s outstanding debt inched up to a new high of P11.166 trillion at the end of June, amid an increase in foreign borrowings to finance the pandemic response.

Preliminary data from the Bureau of the Treasury (BTr) showed the National Government’s debt stock rose by 0.9% from its end-May total of P11.07 trillion. This is also 23% higher than the P9.054-trillion outstanding debt a year ago.

Of the total, local debt accounted for 71%, while 29% were external borrowings.

As of end-June, outstanding local borrowings reached P7.938 trillion, a tad higher than the P7.916 trillion logged in May after the BTr increased its borrowing program for the month.

Overall government securities grew by 0.3% to P7.398 trillion from the previous month, but 25.6% higher from a year ago.

External debt, on the other hand, jumped 2.3% to P3.23 trillion from the previous month.

“The increase in external debt was due to the impact of local-currency depreciation against the US dollar amounting to P64.86 billion and net availment of foreign loans amounting to P25.52 billion. These were tempered by the P18.27-billion decrease in the peso value of debt denominated in other currencies such as the EUR (euro) and JPY (Japanese yen) due to currency appreciation,” the BTr said.

“Increased government spending especially on infrastructure to help pump-prime the economy as a major pillar of the economic recovery program also led to wider budget deficits and some pick up in outstanding government debt recently,” he added.

The BTr attributed the increase to the P11.07-billion freshly acquired guarantees and the P3.98-billion impact of local-currency depreciation, which were partly offset by third-currency exchange rate fluctuations and debt repayments.

Mr. Ricafort said the government’s debt pile will continue to increase in the coming months as public spending rises, especially on infrastructure and ahead of the May 2022 national elections.

“The budget deficit-to-GDP (gross domestic product) and debt-to-GDP ratios of the Philippines have been relatively lower compared to some countries in ASEAN/Asia amid fiscal discipline in view of limited government funds allowed under the law for any additional stimulus measures.”

The government planned to raise P3 trillion this year from domestic and external lenders to help fund its budget deficit seen to hit 9.3% of GDP. 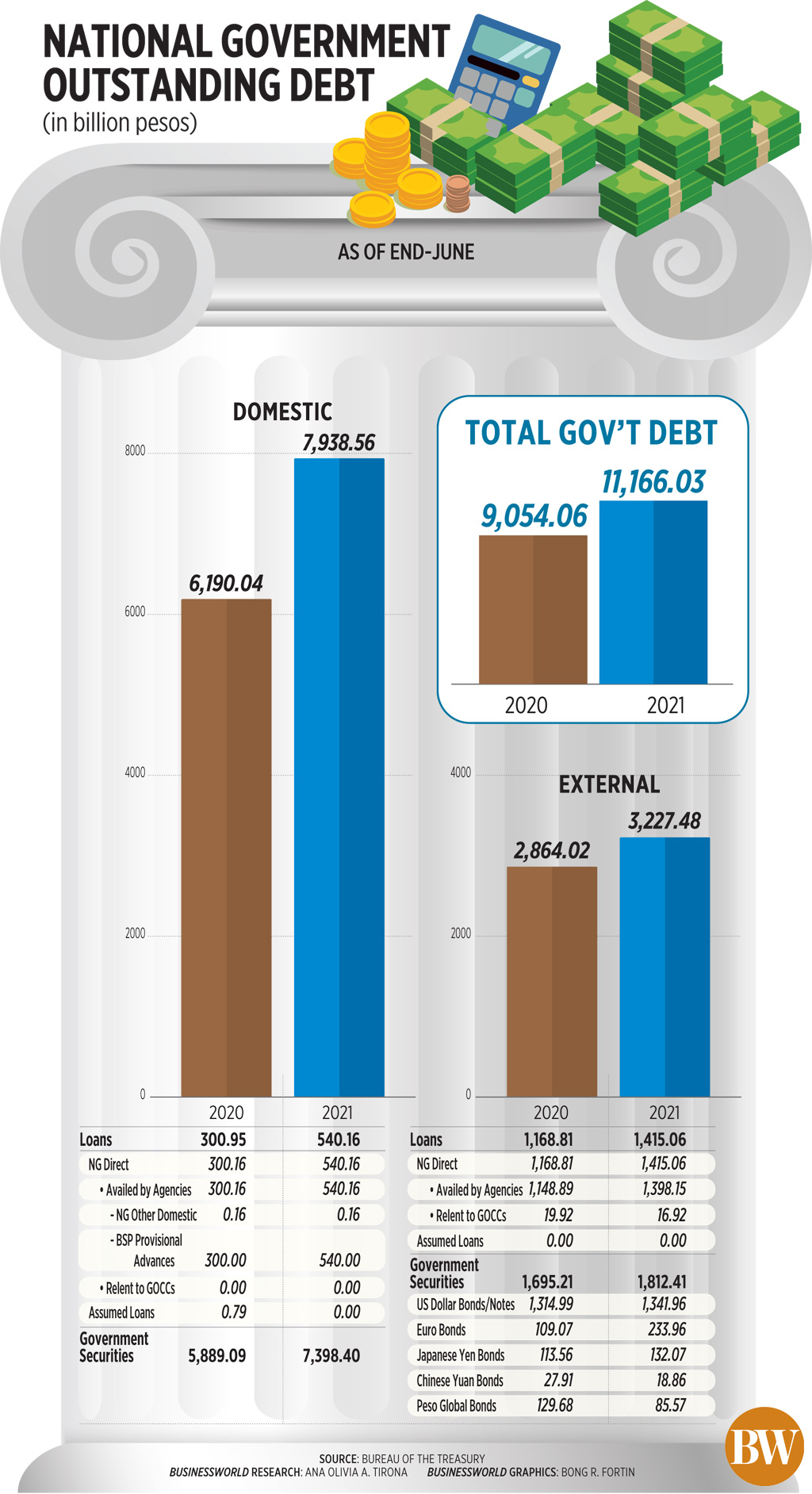 Dominguez, Pernia due in Tokyo to discuss progress of key Japan-backed infrastructure projects