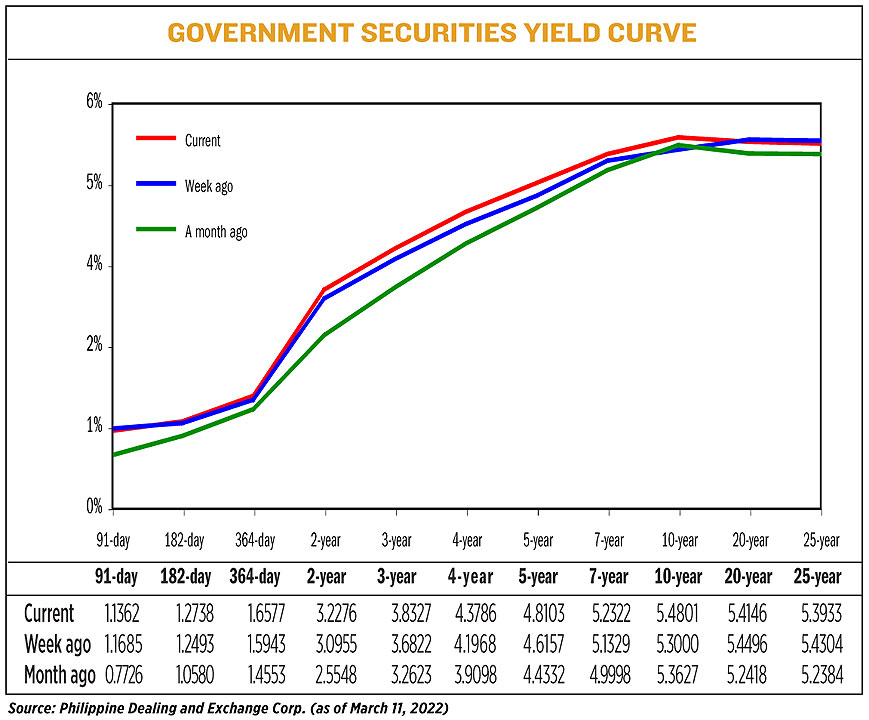 GS yields rose by 8.38 basis points (bps) on average week on week, based on PHP Bloomberg Valuation Service Reference Rates as of March 11 published on the Philippine Dealing System’s website.

“External factors continue to dominate,” ATRAM Trust Corp. Head of Fixed Income Jose Miguel B. Liboro said in an e-mail on Friday. “The Russia-Ukraine conflict continues to drive financial markets worldwide with the sharp spike in the price of oil and other commodities in addition to the ethical and humanitarian crises.”

He said investors are “leaning cautiously” amid the conflict between Russia and Ukraine and the potential inflationary impact of the recent rise in commodity prices. This was evident in last week’s auction of fresh seven-year bonds, where bids were “defensively high,” prompting the Bureau of the Treasury to make a full rejection.

“In addition to this, trading volumes remained low in the market throughout the week with bulk of the interest from sellers looking to reduce positions amid the current backdrop,” Mr. Liboro added.

Meanwhile, a bond trader said in a Viber message that the local bond market was badly beaten last week as “bear sellers clearly dictated the tempo throughout the week due to a multitude of developments like the continued significant rise in global oil prices, United States (US) inflation hitting a 40-year high, and the general risk-off mood stemmed from the ongoing war in Eastern Europe.”

Last week, US President Joseph R. Biden immediately banned importation of Russian oil and other energy-related investments in response to Russia’s invasion of Ukraine, even as the move is likely to push up US energy prices, Reuters reported.

The US also ramped up its sanctions on Russia as it banned imports of seafood, vodka, and diamonds. It also made it hard for Russia to access funds from the International Monetary Fund.

Meanwhile, a separate Reuters report showed February consumer prices in the US surged by 7.9% year on year, highest in four decades or since January 1982. This followed a 7.5% increase in January and the fifth straight month the US inflation hit above 6%.

Back home, on Tuesday, the Treasury declined all bids for the fresh issuance of seven-year bonds after investors asked for higher returns amid inflation fears. Tenders reached P36.5 billion, higher than the P35-billion program.

Had the papers been fully awarded, they would have fetched a coupon rate of 6.5%, 136.36 bps higher that the 5.1365% quoted for the paper at the market before the auction.

For this week, the bond trader expects the US Federal Reserve to hike rates at its meeting. Market players will also monitor developments in the oil markets as it also impacts inflation onshore, the trader added.

“Yields are expected to still move sideways with slight upward bias as we continue to monitor developments on the geopolitical front,” the bond trader said.

Mr. Liboro expects the market to remain cautious. “Given the upcoming policy meetings from the Bangko Sentral ng Pilipinas (BSP), the US Fed, and the risk to higher inflation from spillover effects due to the ongoing Russia-Ukraine conflict, rates are likely to trend higher over the short term.”

“Investors are likely to wait for signs that inflation is likely to remain within the BSP’s 2-4% target range before significant buying interest returns,” he added. — with Reuters