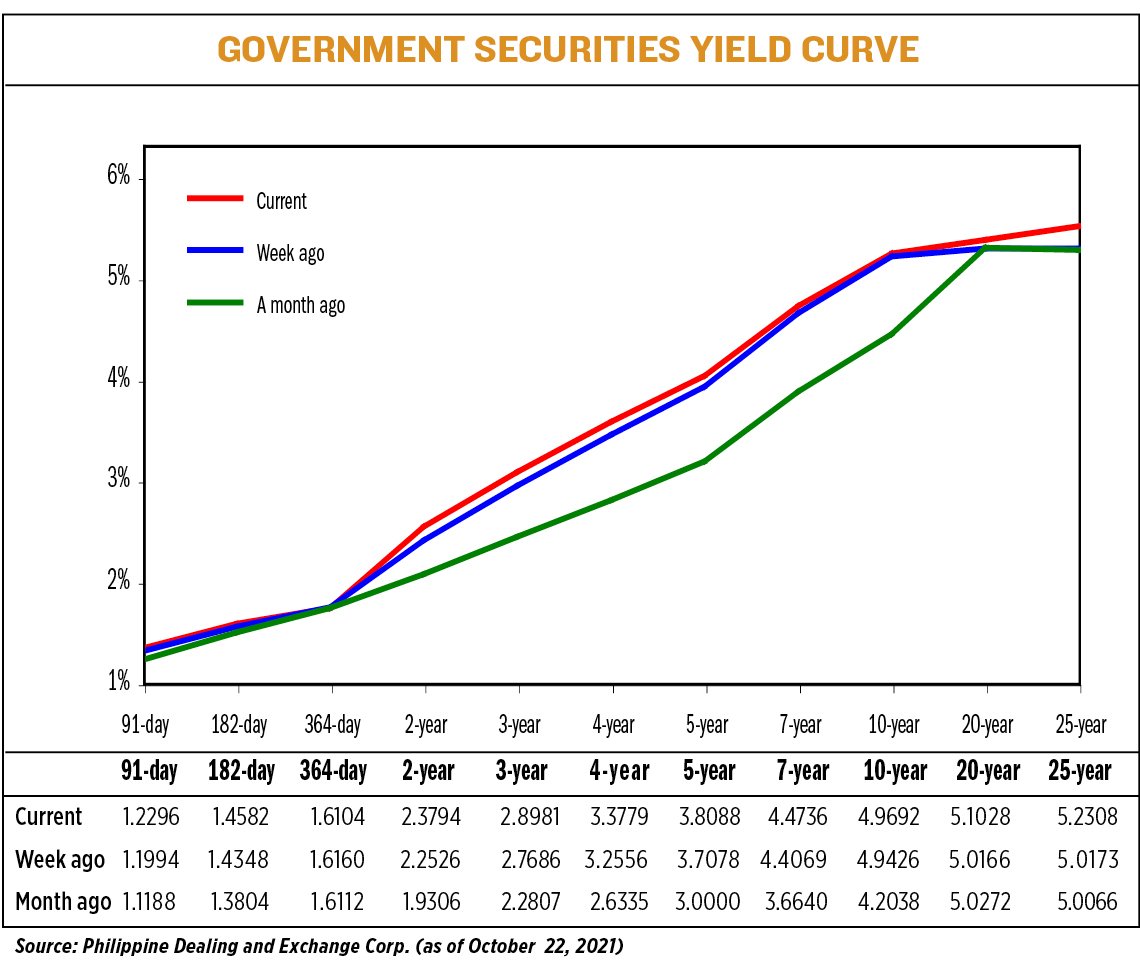 YIELDS on government securities (GS) increased last week after the government rejected the high bids for its reissued 10-year papers amid inflation concerns and expectations of US Federal Reserve’s unwinding of its massive bond buying as soon as next month.

Debt yields, which move opposite to prices, went up by an average of 8.37 basis points (bps) week on week, based on the PHP Bloomberg Valuation (BVAL) Service Reference Rates as of Oct. 22 published on the Philippine Dealing System’s website.

“The Bureau of the Treasury’s (BTr) weekly borrowing and its preference to issue five- to seven-year bonds have been putting upward pressure on rates,” said the bond trader in a Viber message.

“Though we saw some reprieve after the rejection of bids in last Tuesday’s auction, bids continue to be on the defensive,” the bond trader added.

After raising P15 billion in short-dated papers on Monday as programmed, the Treasury rejected the bids for reissued 10-year paper as investors sought higher returns as they expect rising inflation concerns to continue and the impending US Federal Reserve bond-buying taper as soon as next month.

The government did not award the bonds, which have a remaining life of five years and six months, as tenders reached P34.062 billion, below the P35 billion on the auction block and the P65.091 billion in bids recorded the last time the BTr offered the bond series on June 22.

Had the government accepted the tenders, the average yield on the 10-year bonds would have climbed by 169.8 bps to 4.883% from the 3.185% fetched when the series was last offered.

“Uptick in local bond yields saw some reprieve from the P52 billion worth of liquidity coming from the RTB 10-3 maturity as well as BTr rejecting high bids for the scheduled FXTN 10-61 reissuance,” First Metro Asset Management, Inc. (FAMI) said in a separate Viber message.

“Dealers were also seen unloading three 10-year bonds, taking advantage of the freed-up liquidity from the RTB maturity and in view of US Treasury yields rising to their highest level in more than four months,” FAMI added.

For next week, “BTr’s borrowing schedule for the month of November and global bonds’ movements will continue to weigh on the local bond yield movements and will probably render upward bias,” FAMI said.

The bond trader expects the yields to continue to trade sideways with an upward bias as the market waits for the result of Tuesday’s reissued seven-year papers and the release of BTr’s November borrowing schedule.

On Tuesday, the government will offer P35 billion in reissued seven-year debt with a remaining life of six years and nine months. — Lourdes O. Pilar