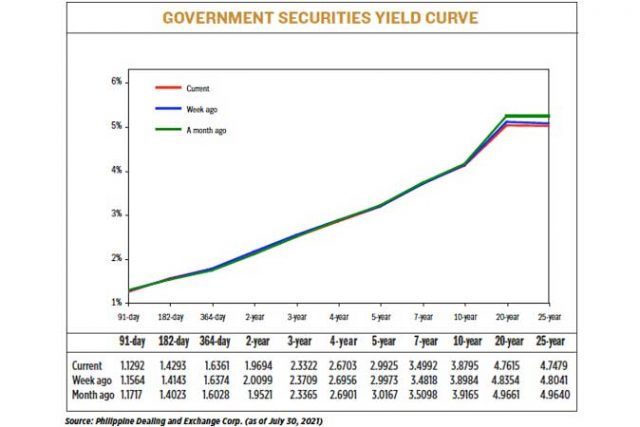 YIELDS on government securities (GS) slipped after the US Federal Reserve left its rates and bond-buying program unchanged at its meeting last week and following the Treasury bureau’s announcement of its August borrowing program.

GS yields, which move opposite to prices, slipped by 2.31 basis points (bps) on average week on week, data from PHP Bloomberg Valuation Service Reference Rates as of July 30 published on the Philippine Dealing System’s website showed.

A bond trader said demand for longer-dated tenors has been strong due to the lack of supply.

“Recent auctions have been concentrated on the five- and seven-year tenors so there are supply concerns in that area of the curve,” the bond trader said in a phone interview last Friday.

The trader added that the US Federal Reserve’s policy meeting last week “kept investors buying local bonds as yields have been trending lower as well.”

“[Federal Reserve Chair Jerome C.] Powell did not rock the boat and he kept everything status quo and his rhetoric the same. More or less, it provided some relief for the market,” the trader said.

The Fed kept its key rates near zero last week, as expected. Mr. Powell said the US job market still has “some ground to cover” before the Fed can scale down its $120-billion monthly bond-buying program.

“[The Bureau of the Treasury’s (BTr)] seven-year bond auction was the initial market catalyst — issuing to strong demand. Even the P10-billion tap offer was fully awarded as the market digested the supply easily,” Mr. Liboro said in an e-mail.

“Announcement of the August auction schedule later in the week, which showed incoming supply on the long end of the curve, caused yields to retrace,” he added.

The BTr on Tuesday raised P35 billion as planned via its offer of reissued seven-year T-bonds with a remaining life of six years and eight months. The bonds fetched an average rate of 3.651%.

Total bids for the papers reached P69.758 billion, making it nearly twice oversubscribed and causing the Treasury to open its tap facility to raise additional P10 billion from the tenor.

For this month, the Treasury plans to borrow P200 billion from the domestic bond market, lower than the P235 billion programmed in July. It is looking to offer P60 billion in T-bills and P140 billion in T-bonds.

The government wants to borrow P3 trillion from domestic and external sources this year to help fund a budget deficit seen to hit 9.3% of gross domestic product.

For this week, Mr. Liboro expects yields to adjust higher in the short term due to the 10-year bond auction on Aug. 3.

“But depending on where it clears, we expect yields to adjust lower given expectations that inflation for June may come in below the 4% level,” he said.

The bond trader sees yields remaining range-bound despite the announcement of a lockdown in Metro Manila.

The government on Friday announced that the National Capital Region will be under ECQ, the strictest quarantine classification, from Aug. 6 to Aug. 20 to contain the spread of the highly transmissible Delta variant of the coronavirus. — N.M.A. Bo