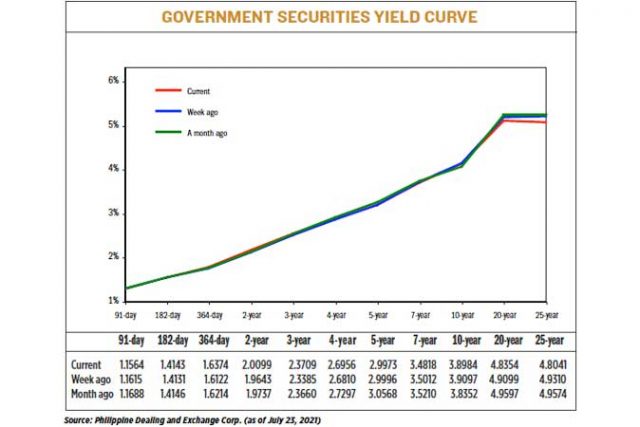 YIELDS ON government securities (GS) traded in the secondary market ended flat last week amid worries over the Delta variant of the coronavirus disease 2019 (COVID-19).

GS yields, which move opposite to prices, fell by 1.10 basis points (bps) on average week on week, based on PHP Bloomberg Valuation Service Reference Rates as of July 23 published on the Philippine Dealing System’s website.

“Movements were mixed [last] week with the long end outperforming the rest of the curve,” First Metro Asset Management, Inc. (FAMI) said in a Viber message.

A bond trader said renewed fears of a rise in COVID-19 cases in the country due to the local transmission of the Delta variant also affected yields last week.

“The Department of Health confirmed that there are local transmissions of the said variant already, which prompted a stricter quarantine status in Metro Manila and four more provinces. These developments triggered a risk-off sentiment which bolstered demand for local bonds,” the bond trader said in a Viber message.

Metro Manila, along with Ilocos Norte, Ilocos Sur, Davao de Oro and Davao del Norte, were placed under general community quarantine “with heightened restrictions” starting Friday until the end of the month.

The Health department on Saturday reported 17 new cases of the Delta variant, with 12 of which said to be local cases and one a returning overseas Filipino. The other four cases are still being verified. Three of these newly reported Delta variant cases are said to be active, while 14 have recovered.

The country now has a total of 64 Delta variant cases.

Meanwhile, rhe Bureau of the Treasury (BTr) raised P35 billion as planned from its auction of fresh 10-year bonds on Wednesday and even opened its tap facility to borrow another P5 billion via the tenor as the offering was over two times oversubscribed, with total tenders reaching P72.956 billion.

The Treasury is looking to raise P235 billion from the local market this month: P60 billion via weekly offers of Treasury bills (T-bills) and P175 billion from weekly auctions of T-bonds.

The government wants to borrow P3 trillion this year from domestic and external sources to help fund a budget deficit that is seen to hit 9.3% of gross domestic product.

“[The] local bond space might continue to trade sideways with upward bias as we head into BTr’s borrowing plan announcement for August. On the other hand, the threat of COVID-19 infection resurgence due to the more infectious Delta variant would also influence sentiment in the coming weeks where we might see more significant flows back to safe-haven assets,” FAMI said.

“However, due to rising global commodity prices and possibly more supply on the longer bonds, investors’ appetite would likely remain stronger in the shorter than five-year papers,” it added.

Meanwhile, the bond trader said aside from the borrowing plan for August, the market will also monitor the seven-year T-bond auction on Tuesday.

“Given the continued spread of COVID-19 and with the market still armed with ample liquidity, local bond yields may move lower,” the bond trader said.

Another bond trader said yields may increase this week amid likely upbeat economic growth reports from the US and the Eurozone that “could encourage optimism on the global markets.”

“Moreover, broad market expectations of more hawkish signals from the US Federal Reserve in its policy meeting might help push yields higher. However, persistent worries over the COVID-19 Delta variant might limit this upward bias,” the second bond trader said in an e-mail. — A.M.P. Yraola